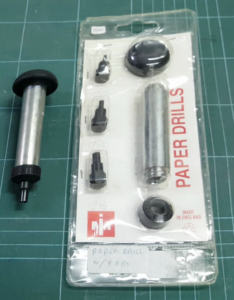 We’ve added a product page for the paper drill we sell, and it includes a link to a YouTube video showing its use.

Although I thought I had the pump stroke counter on my Monotype working, I recently did some casting and found it still wasn’t counting properly. Fiddling with the magnet and sensor position didn’t seem to help.

Rather than just poking at the problem and hoping for improvement I put some thought into it.

The sensor is cylindrical and has nothing to index its rotational position. This would tend to imply that it responds to axial magnetic fields only (or, more precisely, to the axial component of any magnetic field). In order to make it count properly, I had to orient things so the axial field was zero at one or the other end of the piston stroke. 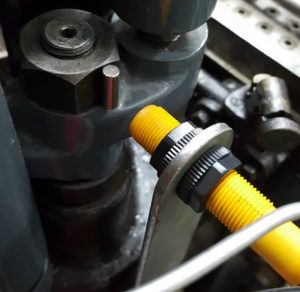 The new magnet and orientation

As soon as the pump crosshead rises, the field of the magnet starts to curve inward towards the pole, and this produces at least some axial field in the sensor. Thus it is just a matter of placing the sensor close enough that this axial field is strong enough to trip the sensor.

This is a big improvement over the original disk magnet, where the field was almost axial to the sensor all the time and the system had to rely on changing distance (of which there was little) to switch the sensor. Hopefully the diagram below illustrates this better. The counter now works much more reliably. 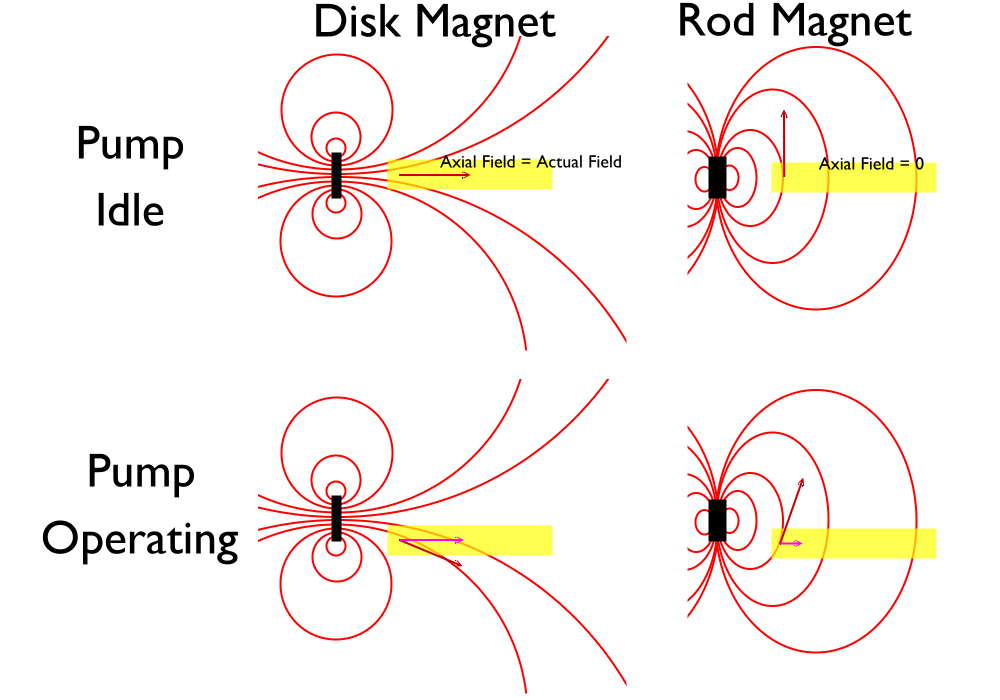 Legend: Black: Magnet, Red: Field, Yellow: Sensor, Dark Red: Field at sensor tip, Pink: Axial field at sensor tip Note how, with the disk magnet (left), the axial field doesn’t change much when the pump operates making it difficult to position the sensor to distinguish between the two pump positions. With the magnet turned (right) the field changes from zero to some non-zero amount which, by adjusting the sensor distance, is strong enough to trip the sensor.

Posted on 2020/03/17 by kpmartin Posted in Our own courses and workshops, Upcoming Events — No Comments ↓

We have cancelled the papermaking workshop we had scheduled for March 28th as part of general efforts to reduce the speed of transmission of COVID-19. Most of the participants who had signed up either felt they were part of a vulnerable population, or were extra-busy because of the epidemic.

We will pick a new date for this workshop once the epidemic has subsided and things get back to normal.

Posted on 2020/03/17 by kpmartin Posted in Grimsby Wayzgoose, Upcoming Events — No Comments ↓

Unfortunately, the upcoming Wayzgoose scheduled to be held at the end of April at the Grimsby Public Art Gallery has been cancelled. This is part of efforts to reduce the spread of COVIDS-19. Although the threat of this disease might well have been cleared up by the end of April, there is no way of being sure, so the organizers felt it was best to cancel now rather than put more cost and effort into an event that might not take place.

The Grimsby Wayzgoose will be celebrating its 42nd annual event this year on Saturday, April 25th, from 9am to 5pm. This show and sale of everything Book Arts will take place at the Grimsby Public Art Gallery, located at 18 Carnegie Lane, in Grimsby, Ontario.

We will have a table at the fair, where we will be selling paper, marbling, and a selection of supplies and tools for marbling and bookbinding. This year we also have a section submitted for the Anthology.

Posted on 2020/02/23 by kpmartin Posted in Drying and finishing, Our own courses and workshops, Pulp preparation, Sheet forming, Upcoming Events, Us — 2 Comments ↓

We’re holding another of our Introductory Papermaking workshops on Saturday, March 28th, 2020, running from 9am to 4pm (with a 1-hour lunch break) at our store in New Dundee.

At the workshop, you’ll learn about the basics of making paper from commercially-available pulp and your own recycled paper. We’ll touch on plenty of more advanced topics to give you a good overview of what you can do in papermaking.

Depending on how prolific you are, you’ll make 40-80 5×7″ sheets which you can either take home damp, pick up fully-dry at a later date, or for the cost of postage, we can ship them to you.

If you’d like to attend this workshop, please contact us as soon as possible to avoid being disappointed by finding the workshop already full.

For many years we carried two products for helping with pigment retention in handmade paper: our Retention Agent and our Scavenger. Both were cationic agents (that is, they developed positive electric charge in water), which attracted them both to the cellulose fibres and the pigments, both of which are generally anionic (developing a negative charge in water). The two products differed in their molecular weight, with the Retention Agent having a fairly low molecular weight and the Scavenger having much higher molecular weight with long single-strand molecules.

Pigment retention is such a complex subject that I really don’t have room to get into it here, except to say that opposite charges attract, so the retention agents either coat the anionic pigment particles making them cationic and thus attracted to the fibres, or the long retention agent molecules cling to both the fibre and the pigment, acting as a tiny thread helping to hold them together. That first effect is why excessive quantities of retention agent actually impair retention because both the pigments and fibres become converted to cationic behaviour.

We started to have trouble purchasing these products in suitable quantities, and being liquid limited their shelf life, so we have now discontinued both of them, replacing both with a powdered retention agent.

To use this new product, you mix some of the powder with water beforehand, which produces a slightly syrupy liquid very much like our old Scavenger in appearance, in usage, and in its chemical properties. The prepared solution has a relatively short lifetime (a few days, depending on water purity and storage conditions), but because you only mix up the amount you need, this means you have fresh solution each time.

There is of course a trade-off between the convenience of having a pre-mixed liquid product and the ease of storage and freshness for a powdered product.

The new product is available in the following sizes and prices (as of February 2020):

More carp, live ones this time, and an eagle

The other day, I was walking along Alder Creek, which runs behind our property here in New Dundee, and I happened to spot a group of around 40 carp, just swimming gently to keep up with the current. The water was unusually clear and the fish were close enough to shore that I took a short video of them and posted it to YouTube.

The eagle is the large blob surrounded by smaller blobs which are crows. Sorry for the poor photo; the window doesn’t open and the double-glazing has fogged up internally.

Two days later I saw a bald eagle perched on a tree over pretty much the same area of the creek. This is not likely to be a coincidence; one of those carp would make a tasty meal for an eagle!

The Ottawa Valley chapter of The Canadian Bookbinders and Book Artists Guild (CBBAG) will be holding their biennial(ish) Book Arts Show and Sale on Saturday, May 16th, 2020. Unlike the previous few shows, which were held at the Glebe Community Centre, this one will be held in association with Carleton University’s new Book Arts Lab—The Quad Press—located in the MacOdrum library on the campus just south of centre-town Ottawa.

We will have a couple of tables there, and will be selling our handmade paper, marbling, and supplies for the book arts.

My JD185 lawn tractor can be fitted with a snowblower attachment. The one I have has no part or model number; it is just called the “38 inch snowblower” in the manuals.

At the driver’s seat there is a crank which aims the chute from side to side through about 180 degrees, but to adjust the height and distance of the thrown snow, I have to walk to the front of the blower to loosen some nuts and set the deflector height. There aren’t even handles to loosen the nuts with; I have to use a wrench. This was generally a big nuisance.