There are times where it would be nice to be able to make my own Lanston-style display matrices to use on my Monotype Composition caster. Often I find that matrices made by other casting aficionados were made by cannibalizing a matrix from a surplus font. This has a few downsides: One is that the supply of such expendable matrices is finite; like real estate, they (Lanston) aren’t making any more. Another is that the original marking on the matrix are misleading if left in place, and sometimes do not leave enough room for new markings. Finally, such matrices can only be used for electrodepositing, not for engraving.

Making new blanks should not be rocket science. Their geometry is simple: they are ¾×1⅛″ and about 0.1″ (I don’t recall the exact dimension) thick, with two opposite corners beveled at a 30° compound angle. I can purchase brass bar stock that is already ¾″ wide, cut that into 1⅛″ pieces, and bevel the corners using a jig to hold each piece at the correct angle. If I don’t mind wasting material and I could find a milling cutter with the appropriate profile, I could use my mill’s CNC abilities to cut off a blank with the beveled corner and bevel the next corner on the end of the remaining workpiece. All I would have to do is feed the stock to a reference stop after each one.

The fly in the ointment is that this brass stock is ⅛″ thick, not 0.1″. At one point I had tried using a fly cutter on my mill to thin out a piece of this brass, but on rolled stock like this, the surface material is stressed, so cutting off one face causes the material to warp, and this means you cannot get a consistent thickness. 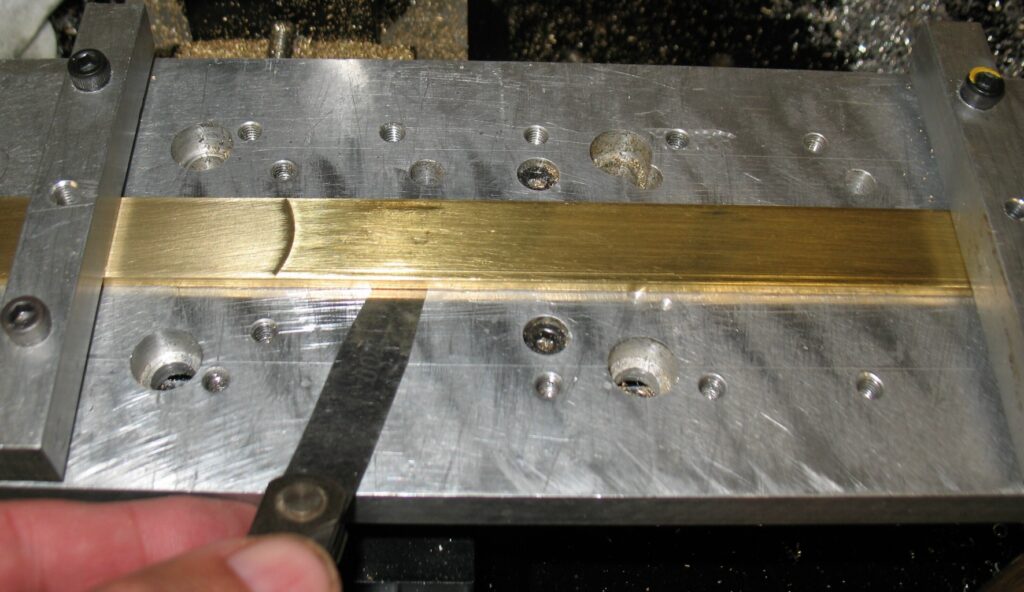 The bar to the left of the arc has been cut thinner causing the material to warp and no longer lie flat on the mill table. Trying to thin out the next section would yield an inconsistent/incorrect thickness.

It is possible to make such a cut in a single pass using climb milling, where the cutting forces press the workpiece against a backing stop, but you have to do this all in one pass, and climb milling requires a more rigid mill than the one I own.

Another option would be to cut the blanks from the stock as-is, and then thin them out as a separate step using a fixture that grips the blank the same way the matrix holder does—by those beveled corners. Such a fixture could do double duty in holding the matrix in place while using a pantograph engraver to engrave a matrix, so the effort of making the fixture is amortized over several tasks.

This, however, seems wasteful of expensive brass, so another thought I had was to use a roller mill to thin out the bar.

These are typically used for jewellery making. Generally rolling the stock in such a mill would widen it out so I would have to trim the ¾″ width again, but it is also possible to make a roller set that prevents the stock from widening, and all that happens is that it gets longer. One concern I have is whether such a tool is strong enough to work on brass that has already been work-hardened by the rolling mill at the factory. I could anneal the brass before starting to soften it, but that leads to the question: How hard are Lanston matrices anyway?

I did some tests comparing the hardness of a sacrificial matrix with that of the as-purchased and also heat-annealed brass bar. I don’t have a Rockwell hardness tester, but I have a small hand-held tester that gives approximate yield strengths of metals:

The tester consists of reference standard, a hard ball bearing and a jig for holding the ball between the test piece and the standard while allowing the stack of them to be struck with a hammer.

The tester held in place over a sample, ready for a hammer strike. You can see some dimples in the brass from previous tests.

The ball indents both the test piece and the reference standard, and using the included loupe to measure the diameters of the indentations, one can calculate the yield strength of the test piece. As you can see by all the dimples, the standard has been used many times, but it still has one entire unused face.

I unfortunately have no instructions for this tool so I have to guess that the area of the dimples would be inversely proportional to the yield strength of each material. This particular reference bar is marked with a yield strength of 68kg/mm², and multiplying that by the ratio of the squares of the dimple diameters gives the hardness of the test piece.

In any case, the upshot is that the Lanston matrices are about the same hardness as the annealed brass, and the as-purchased brass is about 50% harder, so it would seem worthwhile to anneal the brass before trying to run it through a roller mill. Annealing would also make engraving go smoother.

As a footnote, if I made the matrices ⅛″ thick I could use them in my 49A matrix holder without shims!