Improved Shim for my 49A Display Matrix Holder

Posted on 2022/02/17 by kpmartin Posted in Kevin, Monotype Composition Caster — No Comments ↓

This mould’s cavity is not in the same position (except for 12- and 36-point casting) as that of the Lanston moulds, so English Monotype has a special matrix holder, designated number 49A, for this purpose. The holder has an adjustable slide on its back, which one sets to the position appropriate for the body size of the type to offset the matrix position by the correct amount. Each time this is adjusted one also has to adjust the front draw rod on the caster so that that cone hole on the matrix holder gets rough-positioned under the centering pin.

In addition to the difference in mould cavity position, there is also a difference in the height of the face of the mould above the caster table, or perhaps this matrix holder holds the matrix a bit high. In either case, if you have the carrying frame on your caster adjusted for using Lanston matrices, moulds, matrix holders, and matrix diecases, and you try casting with an English display mould and the 49A holder, the matrix does not seat tightly to the top of the mould and the top of the body of each type is surrounded with a daisy/lion’s mane/starburst shaped squirt. If you try to continue running the caster eventually some of this gets left behind adhered to the face of the mould resulting in a much larger squirt.

To correct this, the generally accepted procedure is to place a shim behind the matrix in the holder. Up until recently I have been using two pieces of brass shim stock, one 0.010″ thick and the other 0.012″ thick, for a total of 0.022″ (0.56mm) , which seems to be enough to produce a good seal with the face of the mould. I have, however, found this to be a bit of a nuisance, as seemingly each time I change the matrix one of the shims shift out of position or sticks to the matrix. I have to store the holder with a matrix in place to prevent the shims from falling out and being lost. I have also occasionally found a matrix that needs a slightly thicker shim.

I now have an improved shim. This one is a single piece of 0.015″ shim stock, with 4 layers of adhesive-back aluminum tape for a total thickness of 0.023″ (0.58mm). I have also cut it to a shape that more accurately fits the matrix recess and also is held in, even with the holder empty, by the lugs that retain the matrix. 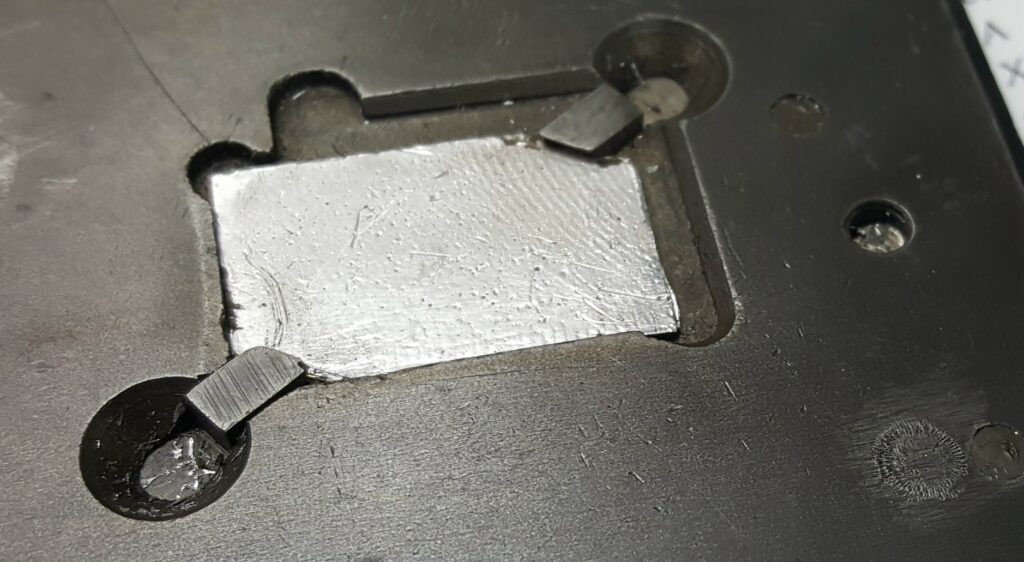 It remains to be seen how durable this is. Oil might gradually loosen the adhesive, and the aluminum itself might wear off.

One other thing to note is that there is a limit to how thick this shim can be. Clearly if it is too thick the lugs will not be able to engage the beveled corners of the matrix, but even before that point is reached, the lugs will be held open a bit extra by the raised matrix. This will cause the Slide Retaining Pin (part code a49A4) to project from the side of the matrix holder, preventing its insertion into the carrying frame. I’m not certain what the intent of this pin is. It may be to prevent insertion of the matrix holder into the carrying frame if the matrix is not seated properly, or it might be to prevent the lugs from opening when the holder is installed (dropping the matrix onto the face of the mould) if you accidentally press the release lever.

Of course, if you are running your caster adjusted for all English moulds and matrices, the carrying frame on the bridge will be set about 0.020-0.025″ lower and this holder with work fine without any shims.

I have several of these holders so I might consider a third alternative: I could mill about 0.025″ off the rails on either edge which run in slots in the carrying frame. This would allow the holder to sit that much lower, so no shims would be necessary.

Some day I’ll spend some time measuring the vertical dimensions of all my moulds and also of the various matrix diecase types and display matrix holders, to see if I can pinpoint the origin of this height discrepancy. It would also be interesting to determine if the display holders have any vertical play to ensure that the matrix is only pressed to the face on the mould when the centering pin reaches the bottom of its stroke. Although the display matrices are not moving all over the place like composition ones, the mould blade is still opening to the set-width around the time the matrix is seating. It may be that sizing is complete before the carrying frame finishes its descent so this would be a non-issue.