What was lost is now found!

Posted on 2020/07/18 by kpmartin Posted in Kevin, Monotype Composition Caster — No Comments ↓

Ever since the ATF conference in Salem MA in August 2014, I’ve been looking for the 49A matrix holder which I had brought to the conference to show around. This is a holder for using Lanston display matrices with the English display moulds. This holder was interesting insofar as it had a failed attempt, from the factory, to repair a casting defect, leaving the tip of a tap broken off in the body of the holder. 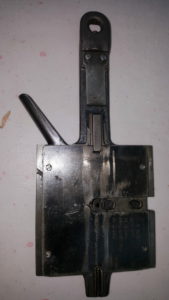 Proof positive that this is the same holder, I removed the cover and verified that the broken tap was there: 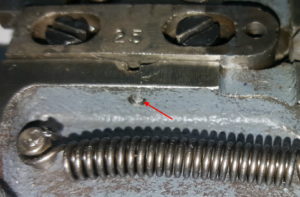 The red arrow points to the broken tap. They were attempting to repair that hole in the casting visible just above the tap. It appears that they decided that the hole was not critical and gave up repairing it.

So where has it been for the past six years? It was in a crate of keyboard spare parts! I had brought this crate along with me to the conference for the swap meet, and it seems that after showing the mat holder around it ended up in this crate when I packed up.

It turned up this week when I was rummaging through all my spare parts looking for anything related to casting strip material on the composition caster.

So far, I can’t cast strip material because the strip casting moulds use a different pump (the nozzle has a different location). The strip-casting pump I have is a Lanston pump, and my caster is an English one so the pump will not fit. The Lanston pumps are wider where the levers that operate them run. In order to use this pump (and any other Lanston pumps, of which I have several), I need Lanston versions of the pump levers with part codes 18H and 24H.

I’m also missing several pieces of the linkage that operates the mould blade for the strip moulds, but I should be able to make my own parts for this. But the pump levers are castings that I can’t reproduce easily.

In the meantime I’d received another 49A holder from Rich Hopkins, but it is always nice to have a mystery solved!