I have some display casting to do in 18 point on my Monotype Composition Caster, but I’m having a tough time finding a set of accessories that will work together to accomplish this.

My original intent was to use my 18 point display mould made by Monotype Corp. in England, and my display matrix holder for using English display moulds with American-style display matrices (part code 49A). This was my preferred route because this mould is in excellent condition. But, try as I might, I’m utterly unable to find this mat holder amongst my casting equipment. 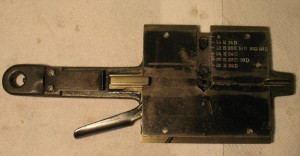 Have you seen this mat holder?

Failing that approach, one alternative would be to use my American-made display mat holder with the English mould. The problem here is that for all display sizes other than 12 and 36 point, the position of the mould cavity is different on American and English display moulds. In particular, for 18 point, the English mould cavity is 3 points lower (in terms of matrix orientation) than the American mould cavity. The American mat holder has 4 sets of interchangeable inserts to modify matrix alignment, but none of these is designed to raise the mat—they all lower the mat (typically for casting all caps on a size body smaller that the face’s size) by varying amounts.

American mat holder insert sets. This is not a full selection of all 4 sets as there is one duplicate here.

It is plausible that I might be able to modify one of these sets to raise the mat by 3 points (or, to match the motif of the genuine sets, 0.050″, about 3.6 points), but one piece, in the upper left of each set in the photo, would have to be made longer so I might have to make this from scratch. This is not something I would look forward to because this part has a fairly complex shape. Maybe the lugs underneath can be trimmed to the same effect, maybe not. But that’s not really relevant because I got up and down confused.

The third approach would be to go completely with the American system, using an American mould and American mat holder. This would seem like a sensible way to have started, but my American display moulds are in sad shape: they are dirty, heavily used, and have unknown amounts of wear.

The American moulds work with interchangeable mould blades for the various body sizes. One basic mould (type U) is used for 24 to 36 point type, while the other (type T) is used for 12 to 18 point. I have never encountered any mention of display sizes between 18 and 24 so if such exists, I don’t know whether the T or U mould is used. The type T and U moulds actually only differ in one part, the right type block, which determines the position of the nick-side of the mould cavity (to the operator’s left, defining the bottom face of the type). All other size changes are done by positioning the right type block (defining the top face of the type). The actual casting size is determined by a mould blade kit which consists of 6 parts: 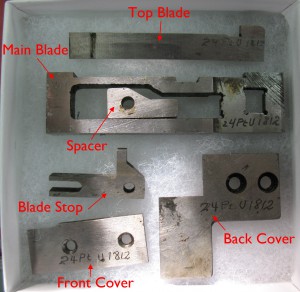 These parts are custom fitted to a particular mould, and you can see the serial number of the mould marked on the pieces. The spacer holds the left and right type blocks the correct distance apart and is the one kit part that is not tied to a particular kit or mould serial number—it is only specific to the body size. The spacer also limits how far the blade can open (to widen the type). 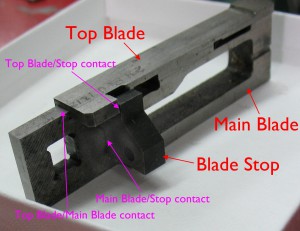 I have quite a few kits:

…but only two of these are complete and have the matching mould. Worse yet, here is my only 18-point mould blade kit: 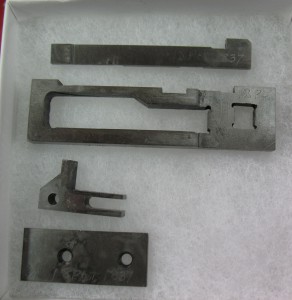 The spacer and back cover are missing! As it turns out the back cover for an 18 point T mould and 30 point U mould are almost identical. There does not appear to be any close fitting involved (in a mould assembled with no front cover the blade can be visibly shifted up and down) so in a pinch I could use the back cover from a 30-point kit. The spacer is the critical part and since this is the only 18-point kit I have I can’t borrow the spacer from another kit.

So it looks like I might be making an 18-point spacer for an American display mould. The shape of the part is fairly simple and does not require extraordinarily precise machining work, except for its thickness, which must be accurate (and the faces parallel) to 0.0001″ to get properly-sized type.

In the meantime, I can only hope that my 49A display mat holder will pop up, saving me all this trouble!

As often happens concerning the alignment of American display mats, I had my up and down reversed. The 36- and 12-point mats have the same alignment in both systems. Sizes smaller than 36 that use the Type U mould (e.g. 30 and 24) are lower in the American mould than in the English one, while sizes larger than 12 that use the Type T mould (e.g. 14 and 18) are higher in the American mould than in the English one. As a result, the 18-point mats I want to use in the American holder must be lowered by 3 points to fit the English mould. This could be accomplished by using the first replacement mat holder insert set (41A19, 20, 21) which lowers the mat by 0.050″ except that is the one set I don’t have. Even though this set is a standard accessory to the mould it would be just as much trouble to make as a custom set to raise the mat.

This still pretty much leads me into the third option.