Adjusting the Second Transfer on a Linotype

Posted on 2023/01/10 by kpmartin Posted in Equipment Acquisition, Repair, and Maintenance, Kevin, Mackenzie Printery and Newspaper Museum — No Comments ↓

Continuing my work on the Linotype line caster at the Mackenzie Printery and Newspaper Museum, this weekend I adjusted the second transfer alignment, where the matrices are transferred from the second elevator to the distributor bar.

On at least two occasions I have had matrices hang up there, preventing the second elevator from descending to pick up the next line of matrices.

Both the distributor bar and the short bar on the elevator have a V-shaped underside with grooves in them, to match the notches on the top of the matrices. Each matrix has at least one pair of teeth on the sides of this notch, which engages in the grooves of these bars, allowing the matrices to hang from the bars with no other support. The various matrices have different combinations of teeth which, combined with appropriate gaps in the grooves of the distributor bar, allow the matrices to each drop into its proper channel in the magazine.

The ends of the distributor bar and elevator bar are stepped to automatically align them in the vertical direction, but the front-to-back alignment is something that must be adjusted. Here is how the bar lined up at first: 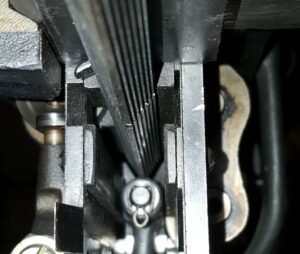 The elevator bar should be shifted towards the front of the machine (to the right in the pictures). None of the books I have detail this adjustment, other than a mention of checking if it is correct by manually sliding a wide matrix across the join, feeling for drag and rough spots.

The adjustment turns out to be two special screws on the rear of the elevator, one of these screws into the brass/bronze block just visible in the upper left of these photos. There is one of these to adjust either end of the elevator bar. In this case it is only the right end of the bar I wanted to adjust; had I also adjusted the left end of the bar I would have needed to redo the adjustment of the transfer onto the second elevator. Because I only needed a small change in adjustment I could get away with only adjusting one end.

Each adjusting screw actually consists of a brass cup which threads into the elevator body proper, and within that cup a smaller regular screw attaches the bottom of the cup to the bronze block which ultimately supports the elevator bar. By loosening the inner screw a bit with a small slot screwdriver, a larger slot screwdriver can be used to turn the cup in or out of its threaded hole, shifting the position of the bar, and you finish off by tightening the small screw again. This prevents the cup from moving and holds the bar assembly tight to the cup. In my case I wanted the bar shifted to the front so I turned the cup clockwise, adjusting for the smoothest matrix transfer.

Here is the transition after adjustment: 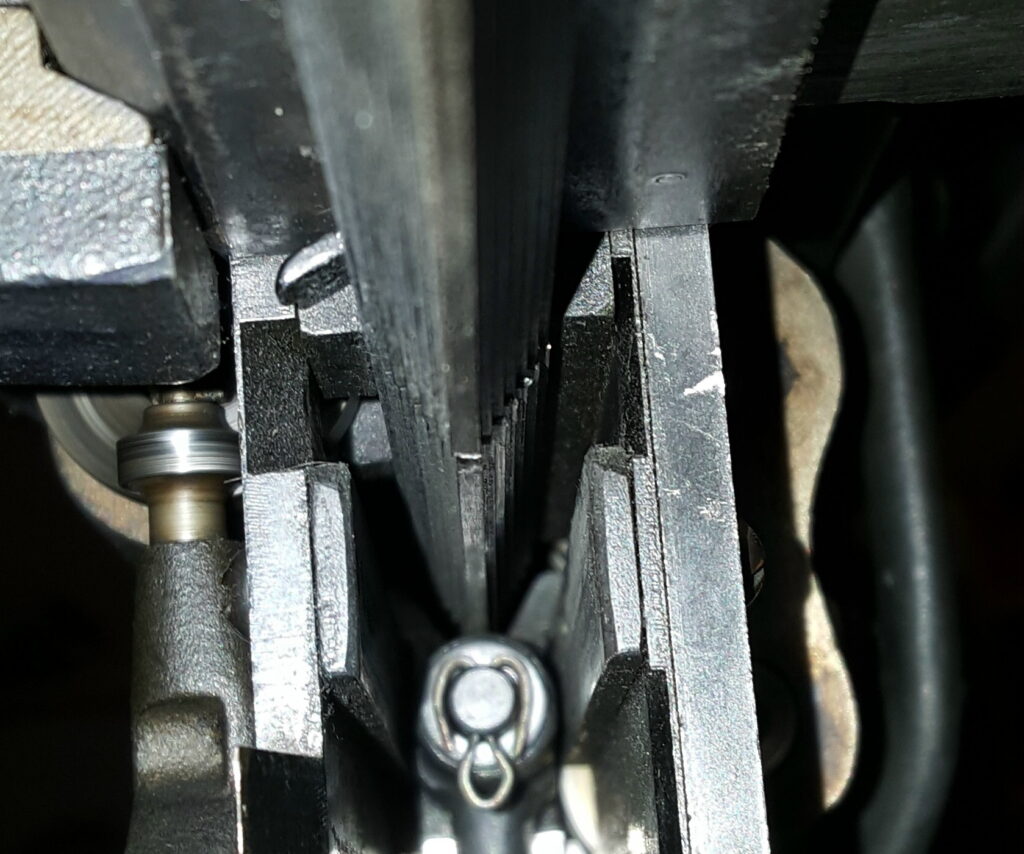 Visually it may not appear to be exactly aligned, but that may be because the end of the distributor bar has been polished only on the front side by years of misalignment. This is the position that gave the smoothest matrix transfer, which is what really matters.

I hope this cures the problem of second elevator hangs.

It is worth remembering, when tuning up a Linotype, that this adjustment should be done before any alignment adjustment of the transfer onto the second elevator, because the latter depends on the former. This is unfortunately the opposite order than would be implied by the book (which follows the mechanism in the order that the matrices go through it).