Recently while trying to cast some fonts on my Monotype Composition Caster, I have found that the galley cycles did not operate reliably, forcing me to watch the casting run like a hawk to manually trigger the galley cycle to start a new line of type.

The caster is set in “double justification” mode, meaning that a galley cycle is triggered by both justification-setting air channels (0005 and 0075) being activated together in the same cycle. Watching the caster in action, however, I saw that only the coarse (0075) one was activating. This was sufficient to correctly set the justification because it was followed by a 0005 (only) cycle that set the fine justification and re-enabled the pump. But without both channels acting together there was no galley cycle and the (supposed) new line would be combined end-to-end with the just-finished line.

I also noticed that, first thing in the day, when I applied air to this channel, it would take 5-10 seconds for the pin to raise, when it should really snap up within a fraction of a second. If I pressed it down against the force of the air and released it, it would pop up again right away, but the longer I held it down, the longer it would take to pop up again.

The pin turned out to be sticking, but not due to mechanical friction. Instead a film of oil between the flat bottom of the air pin and the flat bottom of its cylinder was delaying the rise of the pin due to suction. The longer the pin stayed down, the more complete the film became, making it harder for the pin to rise again. 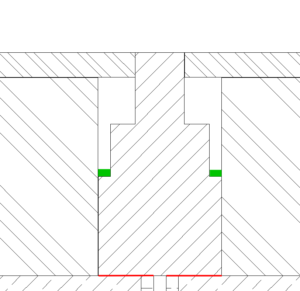 A cross-section of the pin in its lowered position. Oil can enter the cylinder and collect over the piston (green) and then as a film under the piston (red).

In order for the pin to rise, air has to enter the space below the piston, and for this to start the oil film must move laterally. Until that happens the air pressure is only being applied to the tiny diameter of the actual air pipe entering the cylinder. This feeble force must work against the viscosity of the oil to break the suction. Once the pin rises a bit, the air can get under its entire diameter and the full force is then available to raise the pin the rest of the way.

For most lubrication on my caster I have been using an oil with a property called “high tack” which allows it to remain on open surfaces (such as the jaw slides) without draining away so quickly. This property of the oil likely makes it even more prone to produce this suction effect. 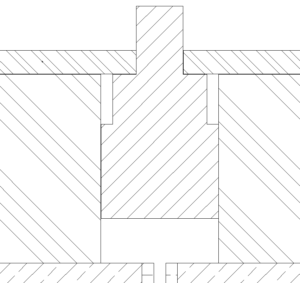 Cross-section of the air pin in its raised position

Because of the shape of the pin, when it is raised there is still a cavity that can hold oil. Had there been just a single step between the lower piston part and the upper pin, any oil above the pin would be forced out when the pin was raised.

I disassembled the justification air pin block, and cleaned all the parts. They were still coated with the primordial gunk from when I got the caster so I have them a soak in pain remover. After rinsing and drying they looked great. 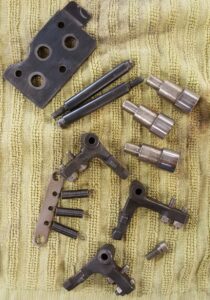 I also soaked up the oil in the bottom of the cylinder with some paper towels, but it seems inevitable that oil will accumulate there again. If the underside of the air pin were a bit concave this would give a permanent air pocket which would prevent the suction but I did not want to modify the parts if I could avoid it. Instead I made some loops out of fine wire and put these in the cylinders under the pins. 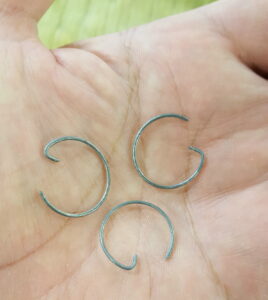 The spacer loops. The bent end is there to make it easier to grab them with pliers for later removal.

This wire raises the air pin a bit from its normal down position but it provides an air space below the pin to break the suction. 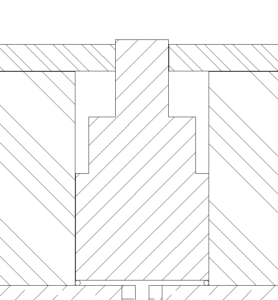 The air pin with the spacer wire providing an air gap.

The new higher “down” position of the pin is not a problem because the levers have an adjustment screw which bears against the pin. Furthermore there is enough slop in this mechanism that I did not actually have to change these adjustments. This is one of the places where I wonder why the designers of the machine bothered with any adjustment, as their precision in making the parts is far greater than the tolerances required here.

In any case this mechanism now operates crisply, and it ran through an entire ribbon file without missing any galley cycles.