A Cool-down Drool on the Monotype

I have recently taken another Monotype mould out of mothballs to use for casting a font of 6-point type. This is one of the moulds I got from Rich Hopkins’ tertiary storage, i.e. his garage. I had cleaned off the coating he had applied to prevent rust in storage, adjusted the cross-slide, and tried to cast the contents of a matcase to determine its layout. When casting type as small as 6 points, pretty much the only way to identify the matrices is to cast them, and better yet proof the cast type.

Unfortunately this mould’s cooling passages were clogged completely and with no cooling flow the type came out with fins everywhere and I gave up when I got a squirt, likely caused by a bit of fin broken off and landing between a mat and the face of the mould.

I shut down the caster and didn’t come back to it until after Christmas holidays.

Preparatory to removing the clogged mould, I cranked down the pot, now cold, and found that it would not swing out fully because a lump of type metal had solidified around the nozzle and was bumping against one of the thumbscrews that locks the galley support. 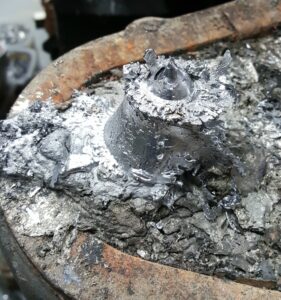 The metal had even dribbled over the edge of the pot forming a sort of metal-cicle.

This does not normally happen when the pot cools off and solidifies. I think that, with the nozzle area of the pot surrounded by the overheated caster table and mould, the metal in the pump and nozzle remained molten even as the rest of the pot solidified, forming a hard case that contracted as it further cooled. The molten metal inside would normally be sealed off and prevent this case from contracting, but in this case there was still a path for molten metal to escape, so a steady dribble of metal was coming out of the nozzle, forming this little mess.

2 comments on “A Cool-down Drool on the Monotype”