The caster was having trouble doing the first horizontal transfer from the first elevator to the second elevator. The transfer was slow, or with a long line of matrices, the transfer would not complete at all. The camshaft would stop on an interlock waiting for the finished transfer. With the clutch out, a good manual push on the end of the line of matrices would complete the transfer and the cycle would continue once the clutch was engaged again.

I manually cycled the machine to the point of this transfer by careful engagement and release of the clutch, and, with the motor off for safety and quiet, tried to manually operate the transfer. I unlinked the transfer slide from its operating arm so I could move the slide without anything else moving and making noise.

I cleaned the track the slide runs on, and relubricated it with graphite.

Even with no matrices to transfer, I could hear that something in the slide was rubbing, but only when the first elevator was up in its transfer position. After some close examination I found that the finger that pushes the matrices was rubbing against the rear vise jaw. In most Linotype manuals, this is part number 21 in chapter 17.

The finger that pushes the matrices 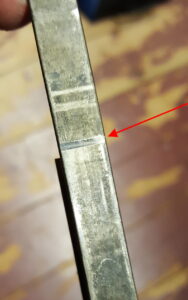 The finger had a shiny spot from the rubbing, but otherwise neither it nor the vise jaw seemed damaged. This seems to be suffering from the same problem as the transfer slide from the assembly elevator to the first elevator: The slide rails have become worn with age, and the finger drops down a bit under its own weight and also rotates a bit rearward, causing it to rub against the jaw. I gently bent the finger so the slide could operate without the finger rubbing on anything.

After fixing this finger, the slide operated smoothly and quietly as long as it had no matrices to move. Once there were matrices I could feel that the slide was binding a bit at some places. More close inspection revealed that the intermediate bar (part number 10) was pressing hard against the matrices (or, conversely, the first elevator was pressing the matrices upwards hard against the intermediate bar) causing them to bind.

See the next post for more on adjusting this alignment.