During the Linotype’s casting cycle, after the line of matrices did its transfer from the assembly elevator to the first elevator, the latter would fail to descend to casting position, and instead of returning to the right, the delivery slide would become unlinked from its operating lever. The camshaft would stop when the machine failed to detect the first elevator in proper casting position.

The source of this problem turned out to be wear in the left matrix finger and the delivery slide and track that it runs on. This is a hinged finger which stabilizes the left end of the line of matrices as it is raised by the assembly elevator and transferred to the first elevator. In most Linotype manuals, this is called the “long finger” and is part numbers 7 through 10 in figure 3-9. 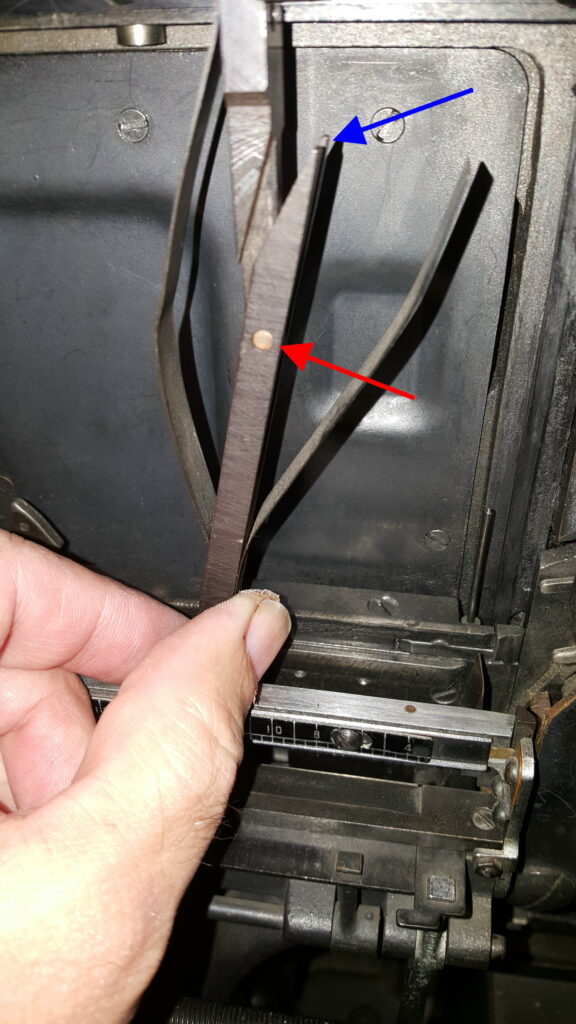 The hinge (rotating on the pin shown by the red arrow) allows it to catch matrices that have spread out a bit.

A proper solution to this problem would be to replace the finger with one having less wear in the pivot, and also doing something about the wear overall in the delivery slide. Unfortunately, parts for Linotypes are no longer generally available, and we have to work with whatever New Old Stock gets discovered. The track itself is machined directly in the frame of the machine and so cannot be replaced; instead we would need to re-machine the track slots to remove uneven wear, and fit oversize versions of all the slides (there are 3 pieces to them). That’s a lot of work and assumes unreasonable availability of parts.

The quick solution was to bevel the rear of this top point (using a fine file) so that instead of snagging the rear vise jaw, it would be gently pushed aside by the jaw as the elevator descends. Now that part of the cycle works like a charm.