Air Compressor for the Monotype Caster

I’ve been using a compact air compressor to run my Monotype Composition Caster. The machine uses pneumatics to control what matrix it casts, when to start a new line, how wide to make the adjustable-width casts, etc. Originally the caster would read its control information from a 4″-wide punched paper ribbon by applying compressed air to one side of the ribbon and detecting the holes because they don’t block the air. My caster now uses computer-controlled valves to inject air into the same holes, but even without the ribbon the machine is still controlled pneumatically.

The compressor I had been using was probably 20 years old, and it was taking it forever to build up pressure. I expect that the piston, cylinder, and/or valves have worn out. Being that old, and an off-brand, spare parts were out of the question, so last spring I bought a new compact compressor to replace it.

The noise of the old compressor was pretty loud, but its replacement seemed even louder! I can stand all the clatter the caster itself makes, but when the compressor ran I couldn’t think straight without hearing protection. 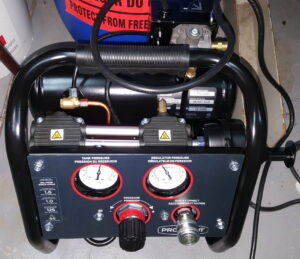 The new compressor. Note that I’ve replaced the “universal” quick disconnect with a “type A” one because I find that the former leak if you tug sideways on the hose at all.

This week I noticed that Princess Auto had on sale a compact compressor which was described as being particularly quiet, so I decided to take a chance and bought it. Wow, what a difference! This compressor is about as loud as a loud refrigerator, i.e. not loud at all. When I turned it on, Audrey’s comment was “is that it?”. With the caster running I don’t think I would hear the compressor at all.

I should point out that the caster itself can be quite noisy, especially when casting composition (text) because of the matrix case flying back and forth, so I often wear hearing protection as well. But at least now people at the other end of the room won’t jump when the compressor starts up.

This compressor also has a proper parts list, and the piston seal is a Teflon ring which could be made from scratch if the OEM part is no longer available.

The old compressor will now be relegated to the basement for occasional use with an air stapler.