During my recent casting run of 18-point Caslon Old Style I found that there were enough problems with the font that I decided to just recast it entirely. I had solved all my alignment, set-width, and substandard matrix problems, so I thought this would be smooth sailing.

Partway through the casting, just as I shut off the pump after casting the last of a particular sort, I heard a loud clang and saw something move out of the corner of my eye. It sounded like some sheet-metal cover had fallen off near the back of the caster.

I released the clutch to idle the caster, and looked around the back of the machine. It turns out the nuts had come off the end of the mould blade operating rod, and the released force of the spring had tried to shoot all the parts across the room. They were foiled in this endeavour by an adjacent metal shelf and its soft contents (plastic bags of soda ash). The clang I heard was the parts hitting the edge of the shelf.

I spent a few minutes finding all the parts, worried that I might have to interrupt the casting job to make a replacement for an irretrievable part. One nut was on the floor directly under the end of the rod. This was probably the locknut which would have just fallen off without much flourish. The spring and inner spring seat were nearby on the floor, coated in cat hair. The rest of the parts were on the shelf, nestled among the bags of soda ash. 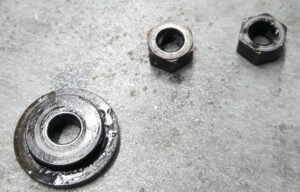 Remaining parts, with most of the cat hair removed, back in place on the end of the rod

I put the outer spring seat and nuts back on the rod, tightening the locknut extra tight (this has happened once before), and proceeded to finish the casting run. If it had not been for the soda ash, some of the parts might have careened into some black hole on the edge of the universe, never to be seen again.

Last time this happened I don’t think I had two wrenches to fit the two nuts and used an adjustable wrench on one of them, perhaps meaning they did not get as tight as they should have. This time I had two wrenches so I’m hoping they are tight enough to stay put.

Other than occasionally verifying these nuts are tight, I’m not sure what to do if they won’t stay on. I’m reluctant to use thread locker, as the pair of locked nuts should already be enough. One thought I had is that compressing the spring puts a bit of torque on the outer spring seat and so tries to unscrew the nuts a bit on each cycle of the caster. If the spring were wound in the other direction it would instead try to tighten the nuts.

Maybe there should be a castellated nut and cotter pin, but the rod is only ¼″ diameter so any such pin would have to be almost microscopic.