A novel motorcycle air filter (not!)

We’ve had a week of beautiful warm (for November) weather here and I took advantage of this to take my motorcycle (a 1987 Kawasaki EX500) out on several rides. Unfortunately on the last ride the bike decided that it wouldn’t idle unless I constantly blipped the throttle. If I released the throttle the engine would go to idle speed but then over a few seconds gradually slow down and stall. Restarting the engine required opening the throttle a bit, something I don’t normally have to do.

This is a symptom of the pilot (idle) system in the carburetor not working properly. This system supplies the fuel needed to run the engine at idle, when the throttle is completely closed. 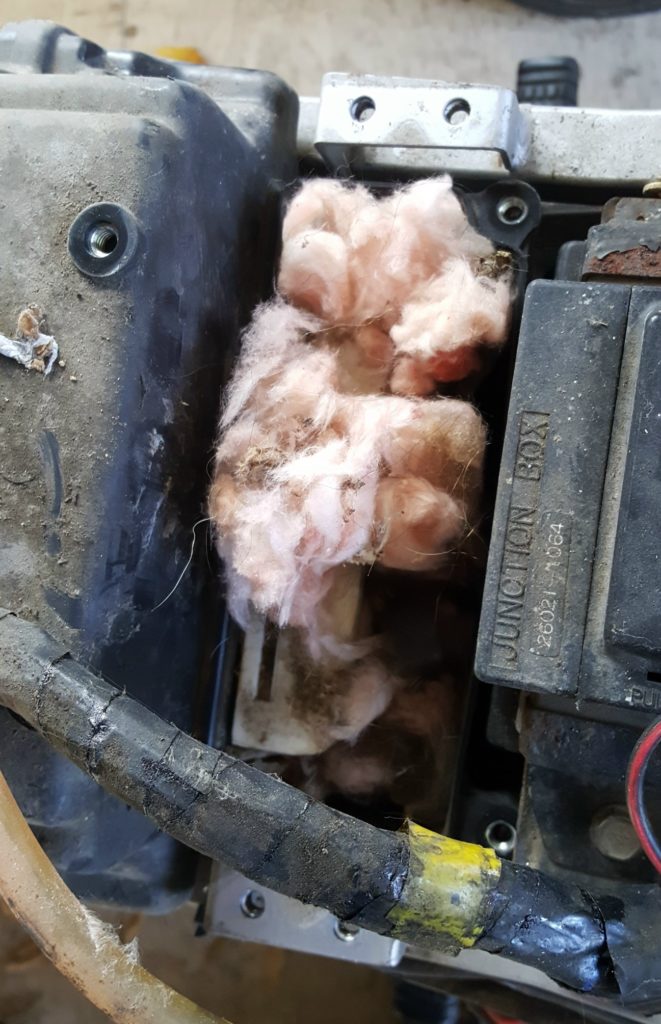 The airbox was almost completely filled with what was probably a mouse nest, containing a mix of fibreglass insulation (mice love that stuff), shredded paper, sunflower seeds, acorns, and other junk. The foam element of the air filter was completely gone.

I’m not sure how long this has been this way; it could have been fairly new, or it may have been like this for years.

To get this cleaned out I had to remove the airbox completely, disassemble it, and wash everything out.

I also removed and cleaned the carbs, and now have things partly reassembled. The engine will idle now, but only with the idle speed turned up a bit. I don’t have the replacement filter yet (it is due later this week) so that might be affecting things a bit.

As it turns out removing the air filter is one of the few things I didn’t actually have to do to remove the carbs. But I did have to remove the side covers of the airbox so it would be able to lift up a bit. Taking those off would have revealed the mouse nest as well.

But now the nice weather is coming to an end so I probably won’t ride again until spring.