Trying out the New Nozzle and Strip Mould

I installed the nozzle I just made into the special strip-casting pump. This pump is a Lanston (American Monotype) pump and my caster is an English-made one, and one of the incompatibilities between these is the pump body size. Although you can’t interchange the pumps directly, it turns out you can interchange the pumps as long as you also interchange the large levers that operate the pump.

With the new nozzle installed I placed the strip-casting pump into my Monotype caster. At first things just seemed wonky. I could not seem to crank the pot up all the way, and the pump mechanism was operating whether engaged or not. It turned out I had installed the lower pump operating lever upside down and on raising the pot this was actually lifting the pump operating rod and crossblocks. Inverting the lever allowed the pot to raise properly and the pump operated properly.

I’m working on cobbling together the linkage to operate the strip mould but it is not complete yet.

I have however been able to operate the caster manually, turning it over one cycle to fill the mould cavity, then manually ejecting the cast metal, and repeating. Here is the result of that effort: 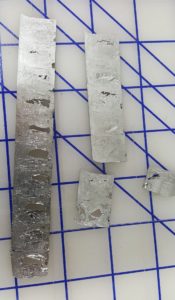 Admittedly that’s pretty rough, but then the mould was cold and the caster was stumbling along at whatever speed I could turn it over by hand, so I think that’s pretty good!