I’ve been working to get my Monotype composition caster converted to casting strip material. I have a few moulds for this, the special pump required (with a different nozzle location), the pump linkage required to run this Lanston (American) pump on my Monotype Corporation (English) caster, and other odd parts of the linkage required for the strip mould. I also have the cutting and stacking attachment, but it is a mass of rust right now. I’ve been making the missing parts from the mould operating linkage and as that job is nearing completion it was time to get the mould and pump combination working.

There is a drawing out of Monotype Corp., of which various Monotype owners have a copy. It is drawing number DB431 and shows 23 different nozzles with their specific dimensions and uses. This drawing is incomplete in a sense, though, as it only gives dimensions for the features of the nozzles that differ from one to the next. The threaded base, taper of the conical tip, and size of the little extension tip that some of the nozzles have are not dimensioned at all on this drawing. As a result I had to determine some of these dimensions myself from nozzles I already had, and take good guesses at some other not-too-critical dimensions.

This particular nozzle calls for an 18° conical flare inside the tip: 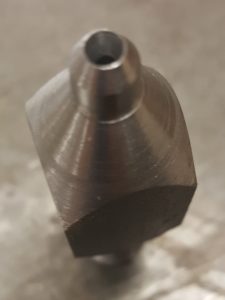 You just can’t buy 18° conical endmills, and even something close (20°) is very expensive, so I shaped the cone using a tiny boring bar mounted on the compound slide of my lathe. I made this from the broken stub of a tiny drill. I thought it was carbide, but the drill bit didn’t really grind like I would expect carbide to, so perhaps it is tool steel.

My makeshift boring tool. For reference, the shank where it goes into the collar is 1/8″ (3mm) in diameter.

The nozzle didn’t quite fit in the pump body, so I had to shorten the stem a bit and cut one turn off the end of the threads, but now it fits nicely and I’ll be modifying my drawing to match.

The next task is to test how it works.