Posted on 2015/05/15 by kpmartin Posted in Equipment Acquisition, Repair, and Maintenance, Mystery Parts, Other people — 2 Comments ↓

While I was at Don Black’s today, Don mentioned that in the process of cleaning up their warehouse (a daunting project which appears to be coming along well) he found a few boxes of what he thought were Monotype parts. One box, which I purchased, contained justification wedges (although they turned out not to be for the Composition caster).

There were also three boxes of what were obviously moulds for making rule or leading seemingly made by Monotype but also clearly not for the Composition caster. 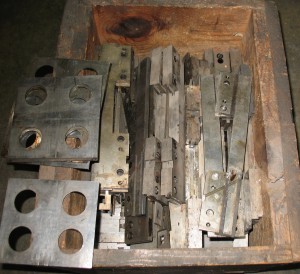 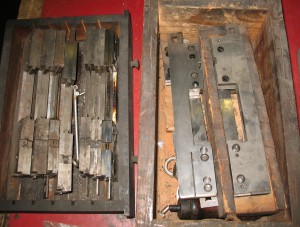 My guess is that they fit the Giant Caster, but some expert on this machine would have to verify that. I think I have a manual for this machine somewhere so I might be able to check this myself.

Don has 20 or 30 of these moulds, in sizes that appear to range from 12 point down to ½ point (try pulling that with an Elrod!). There are also several metal plates, in two sizes, with four large holes in each, perhaps some kind of spacer.

So if any of you know what these are (or even better, you want to rescue them), speak up!