I did a round of cleaning up in the shop, partly to search for my missing mat holder, and partly because I picked up more parts from Don Black.

While cleaning up, I found the box of stuff I picked up at Firefly Press after last year’s ATF conference, and at the bottom of the box, mixed in with a pile of matcase parts, were six mould blade kits for American display moulds. 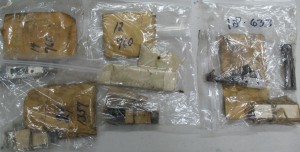 There is one kit for each size: 12, 14, 18, 24, 30, and 36 point. They are fitted for specific moulds and marked with the corresponding moulds’ serial numbers. Needless to say I don’t own any of the matching moulds, but the spacer (“Point Block”) in each of these kits can be used in any mould as they are not serial-number specific.

Had I found these a couple of months ago, I could have avoided going through the trouble of making my own Point Block for running my display mould at 18 points! Now that I have these, though, I can measure the point blocks and add the measurements to my analysis of the relationship between their nominal size and actual thickness. Although they are marked by serial number as well, I may be able to use the Mould-Blade Shield and Mould-Blade Top Guide (what I’ve been calling the Back and Front Covers) to replace missing or broken ones in the kits fitted to moulds I actually own.