Posted on 2015/05/17 by kpmartin Posted in Equipment Acquisition, Repair, and Maintenance, Kevin, Mystery Parts, Other people — No Comments ↓

I got a big lot of what appeared to be justification wedges for a Monotype composition caster from Don Black last week, many of them brand new, still in the protective plastic dip from the factory. 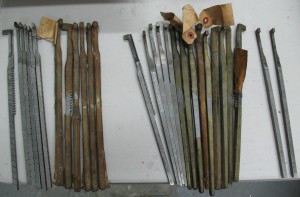 It turns out, however, that these don’t fit the comp caster. The part numbers on them are 310D and 311D rather than 10D and 11D one would expect, and they have too many notches on them for the comp caster. It turns out they are justification wedges for the Monomatic II, a machine produced to supersede the comp caster but arriving in the market too late, when hot metal was on the wane. It appears that the Monomatic’s main improvement was to replace the original paper ribbon encoding with separate encodings for the letter width and for the matcase position thus eliminating any width limitations of the original comp caster. The Monomatic could cast any matcase position to any width, so the letters were not restricted to the (up to) 15 different widths encoded in the Normal Wedge, nor would a letter width have to be fudged because the matcase row for its desired width was already full. The matcase was also enlarged to 18×18 so it could hold 324 matrices, up from the 255 of the 15×17 extended matcase or 272 of the 16×17 unit-shift matcase on the comp caster. That’s enough for two more alphabets. 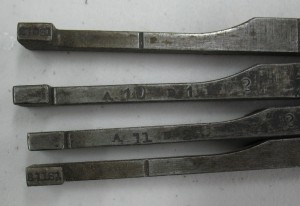 There were also three other wedges in the lot, but they aren’t justification wedges:

These have a slot cut through then, so perhaps they fit over a bolt to accomplish some adjustment. One of them is engraved “18 pt Nº177” and all three have a scale from 3 down to zero and back up to 3 again.

I also have other parts that are for the Monomatic: some racks that clearly have too many positions for the comp caster (and one of which has a part symbol of 312C18 written on it identifying it as a Monomatic II part), and two bridge carrying frames and sliding frames made for the larger matcases. 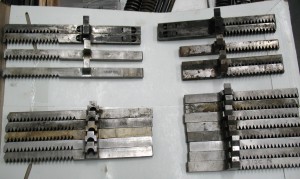 I have no reason to keep these Monomatic parts so if you own a Monomatic and want them, feel free to ask (all, what, 3 of you?)!