Posted on 2015/05/20 by kpmartin Posted in Equipment Acquisition, Repair, and Maintenance, Gorton 3U Pantograph, Kevin, Other people — 1 Comment ↓

The main reason for my visit to Don Black last Friday was to pick up a new (to me) machine. 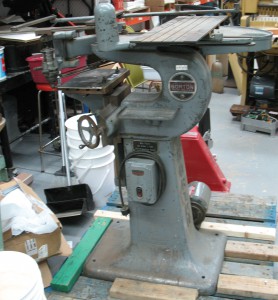 This is a Gorton 3U pantograph mill/engraver, which turned up when Don and Craig were reorganizing their stock. This machine is used to perform engraving and 2-dimensional milling following a template, and is capable of enlarging (by about 25%) or reducing (all the way down to 0%) the template image in the process.

There is a table (on the left) with 3-axis motion calibrated to 0.001″ for holding the work being cut. Above that is the engraving spindle itself which is supported by a jointed set of arms which maintain a constant height and keep the spindle vertical. There is also an arm and pulley system hidden at the back which drives the spindle from the motor just visible behind the foot of the machine. By switching the belts to different pulleys the spindle can be adjusted to eight speeds over a range from 3800 to 15,000 RPM.

The pantograph proper is a parallelogram of four arms, with pivots hanging it from the overarm (grey column near top center) and attaching it to the spindle. The enlargement or reduction is controlled by setting exactly where these two pivots are clamped to the parallelogram arms. As the tracer at the end of the long arm (top right) is moved over the template (placed on the upper ridged platform), the spindle moves in a scaled motion to match.

This machine had been sitting in Don’s warehouse long enough that neither Don nor Craig remember where they got it, so it is quite dusty. Some of the bearings in the pantograph joints need a bit of TLC, and one of the drive belts is completely missing, so a bit of work will be needed to get this into running order.

Although Don didn’t have any documents to go with this machine, we’re fortunate enough that Richard Gorton, great-grandson of George Gorton II, has scanned and posted online all the documents he could get his hands on, along with some history of the company. On this site I have found a full set of manuals for this machine, although as with most machine tools the manuals cover the features specific to the machine as the user is expected to understand machining in general on their own.

I plan on using it to cut matrices for my type caster. You can see a similar machine (but I believe it to be a Deckel rather than a Gorton) being used for making matrices by the late Jim Rimmer in the film “Making Faces“