Things from the parts heap at Firefly Press

Posted on 2014/09/07 by kpmartin Posted in Equipment Acquisition, Repair, and Maintenance, Kevin, Type Casting — No Comments ↓

These are a few of the things I scrounged from the parts heap at Firefly Press in Boston on the departure day from the recent ATF conference.

The first is a bit of an oddity. I’ve never seen it in any parts manual and I don’t know anyone who has ever seen one, but my comp caster uses it as part of its drive clutch: 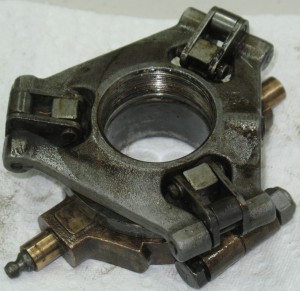 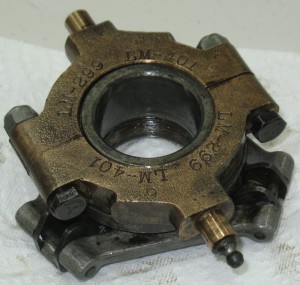 The triangular frame is attached to and rotates with the driven countershaft. The brass slip ring does not rotate but is moved along the shaft by the operating lever. At each corner of the triangle there is a lever and roller which converts the linear motion of the slip ring into pressure on a friction clutch, causing the output gear to rotate with the shaft. The output gear in turn engages with a gear on the main shaft of the caster. This part was caked with dried grease but is now moderately clean, and I will keep it as a spare for my drive clutch.

Next is a set of expansion quoins:

There are one two-inch, two three-inch, and one four-inch quoin. The three larger ones are branded Morgan & Wilcox, but the smallest one shows no brand markings. They can expand from the nominal size to almost twice that either by pulling them open or rotating the central screw using a tommy bar. These have been cleaned, de-rusted, and oiled for their photo, and will be useful for locking up our Challenge proof press against a deadbar. I will have to think about whether they can be trusted for use in our Thompson Auto Platen press, and the chases on our other presses are small enough not to need these.

The other big find was some parts for doing lead and rule casting on the Monotype composition caster: 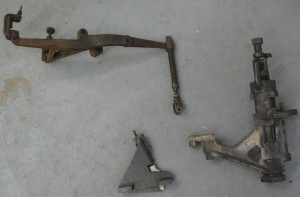 The contraption at the upper left of the photo clamps to the arm that normally drives the centering pin when type is being cast and instead opens and closes the side clamp on the lead & rule mould. This clamps tight against the end of the previously cast strip for casting then opens up a bit to allow the new section of strip to be pushed lengthwise before casting more. At the bottom of the photo is the micrometer wedge stand for strip casting which controls exactly how long a section of strip is cast at each cycle. This in turn fine-tunes the length of the cut strip material as this is always a multiple of the casting length. On the right is a special pump body (with piston) for lead and rule casting. Here is a view from the top comparing a regular pump (left) with the lead and rule pump (right): 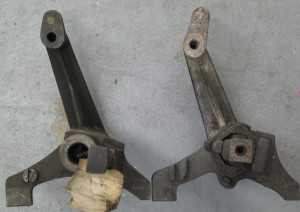 The nozzle location is different to match the location of the nozzle cone hole on the lead and rule moulds.

The micrometer wedge stand has been cleaned and oiled, but the other two parts are still in as-received condition. I am still missing the linkage which uses the type carrier cam arm to drive the lead and rule mould blade, but I’m confident that I can make my own mechanism to do this. The only crucial factors are to get the right stroke length and an appropriate strength of spring box.

In addition to the above, I found plenty of lesser goodies, including a handful of dead nozzles that I plan to refinish to spec (or as close as I can get), some sorts composition mats, and odd parts for matcases.

I’d like to thank the folks at Firefly Press for letting the ATF’ers rummage through their parts.