Posted on 2014/09/05 by kpmartin Posted in Equipment Acquisition, Repair, and Maintenance, Kevin, Other people — No Comments ↓

Over the past few months, Jason Dewinetz at Greenboathouse Press has been working on getting his Supercaster running, but he was having trouble casting 14 point type from American-style display matrices. He was finding that he had to run his caster abnormally slow for the size of the type to get consistent alignment. Type cast at higher speeds, when proofed, looked like it was dancing along the base line.

There is one spring on the caster bridge which keeps the matrix holder positioned as it lifts to release a cast type and presses down again to seal the top of the mould cavity. Jason suspects that this spring is abnormally weak on his caster, allowing the matrix to clamp to the mould out of alignment.

He sent me this spare bridge from his caster so I could try to make some stronger springs to replace the original one. The spring in question is circled in the photo. 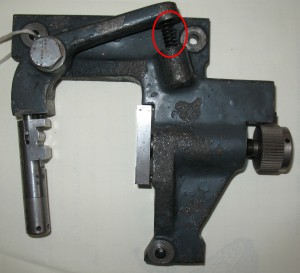 The knob on the right moves the plate in the middle of the photo right or left, moving the matrix and ultimately controlling the vertical alignment. The end of the lever on the left can be rotated to move the latch jaw up or down (in the photo, fore and aft on the actual caster) to control the horizontal alignment. The spring forces the jaw on the lever to press on the side of the matrix holder, keeping it tight against the plate.

I used a scale to measure the strength of this spring, and when the lever end is parallel to the plate, the jaw is placing about 7.5 pounds of force against the side of the matrix holder.

I removed and measured the spring, and set about to make a few springs that might be a bit stronger. Using thicker wire to make a spring will make it stiffer, but it also increases the fully-compressed length of the spring as well as the stress in the wire. If a compression spring is overstressed it will be permanently shortened. To reduce the stress, it is necessary to use more coils in the spring but this further increases the fully-compressed length. If this spring can’t compress enough, it may not be possible to open the lever enough to insert or remove the matrix holder.

After setting up the lathe for spring winding it was not too difficult to make several springs using different wire sizes and different coil counts, so I ultimately made 6 springs, which I colour-coded using paint markers for easy identification:

I measured the force at the latch jaw for each of these and found values varying between 12 and 25 pounds of force, but three of the springs prevent the latch from opening as far as it normally would and so might prevent insertion and removal of the matrix holder.

Using a stronger spring here might have some detrimental effects, for instance increasing the wear on the surfaces that slide as the matrix holder rises and drops on each casting cycle. I also have some suspicion that the cause of the misaligned type lies elsewhere since I see no reason for the matrix holder to move any way but straight up and down, but if a stronger spring here corrects the problem by counteracting any jitter, that might be the way to go. At least Jason can try out these springs to see if they make any difference, either correcting the problem, or demonstrating that the original spring is fine. 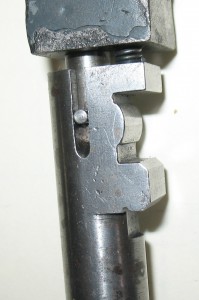