Posted on 2016/12/01 by kpmartin Posted in American Typecasting Fellowship, Conferences and Meet-ups, Kevin, Past Events — No Comments ↓

The second day of the conference was spent at Wells College, in Aurora, on the East shore of Cayuga Lake.

We started off with a hearty breakfast at the dining hall.

The dining hall, grand on the outside… 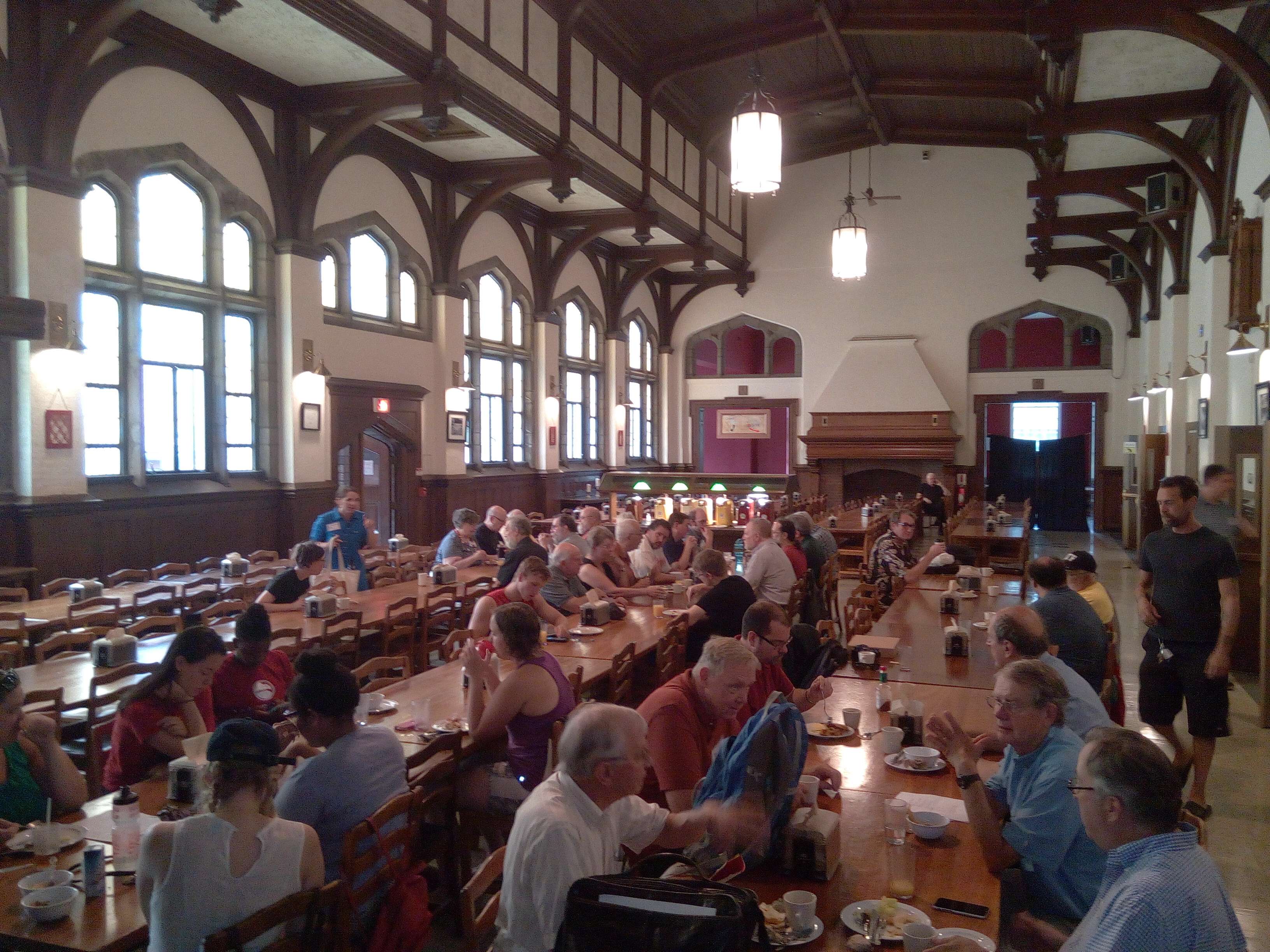 …and grand on the inside. This was actually a photo after lunch. Most of the people are ATF but in the lower left there are a handful of students around for the off-season.

It was another dreadfully hot day, and many of the buildings we were in that day had no air conditioning, including this dining hall. I used more napkins mopping sweat than wiping my mouth.

Fortunately most of the business that day took place in a lecture hall in one of the newer buildings. 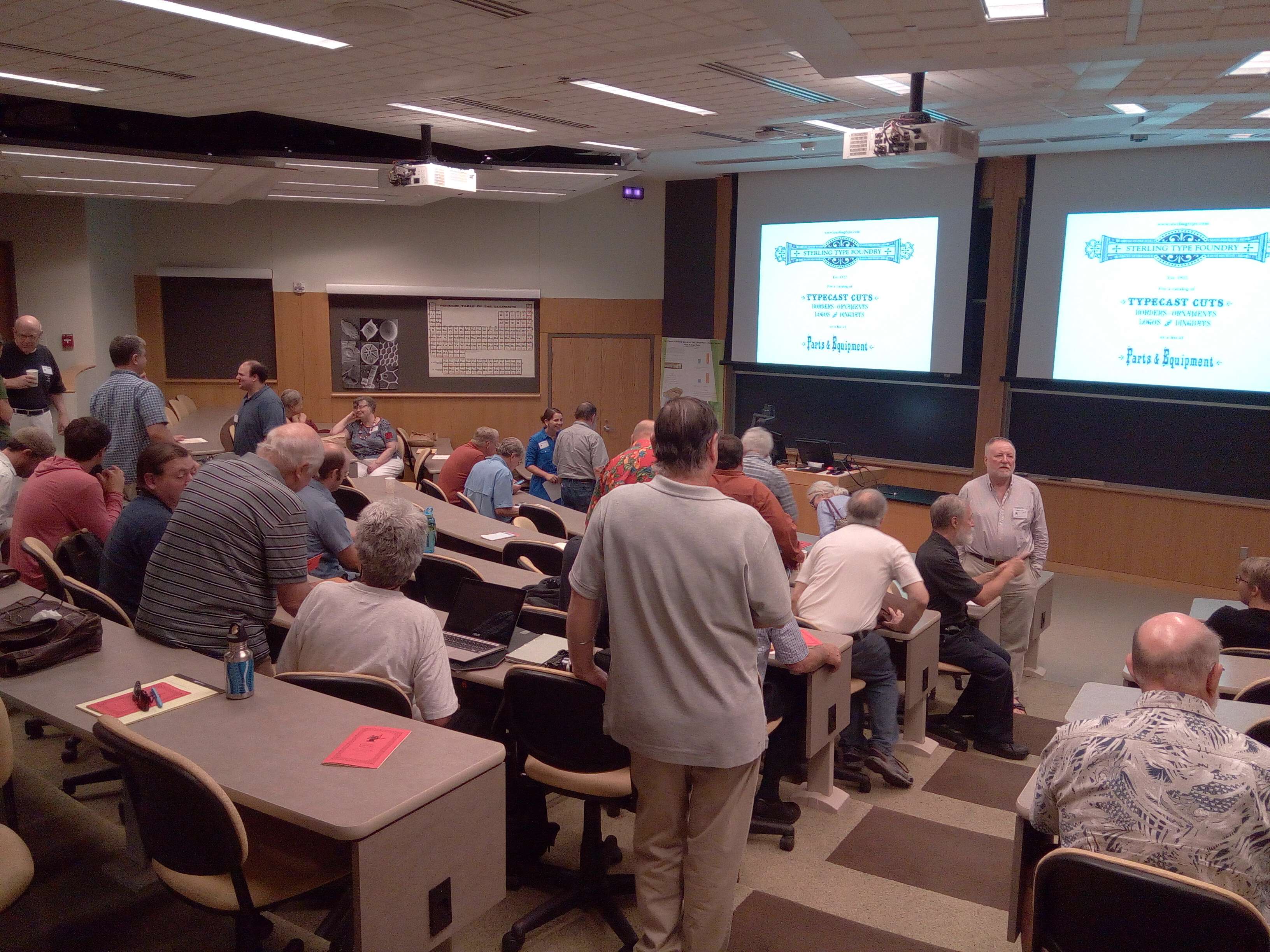 The lecture hall, just after first break, with Bob Magill preparing to talk about the Sterling Type Foundry

Our first session that morning had Greg Walters describing his adventures with his monster pivotal caster, casting 120- and 144-point type while cowering behind a shield. The machine doesn’t really deserve to be called a “pivotal” because it does not automatically close the mould as part of its cycle. The operator must close the mould, seat the matrix, and raise it up to the nozzle. Then a hydraulic cylinder pumps the type metal into the mould. Not so much the pressure, but the sheer volume the pump can produce along with the strong likelihood of leaks in the mould explain the need for the plexiglass shield.

Greg also discussed strategies to deal with the large air bubble which is trapped in the upper half of the mould cavity. Some strategies helped, others blew open the face of the type, yielding see-through type (two pieces of which were sold at the auction).

He had been using a jury-rigged clamp to hold the matrix to the mould, but while rummaging around his shop looking for something else he (or a visitor, I forget now) found the real matrix clamp sitting in the gear case of some other piece of equipment acquired on the same day as the monster pivotal. 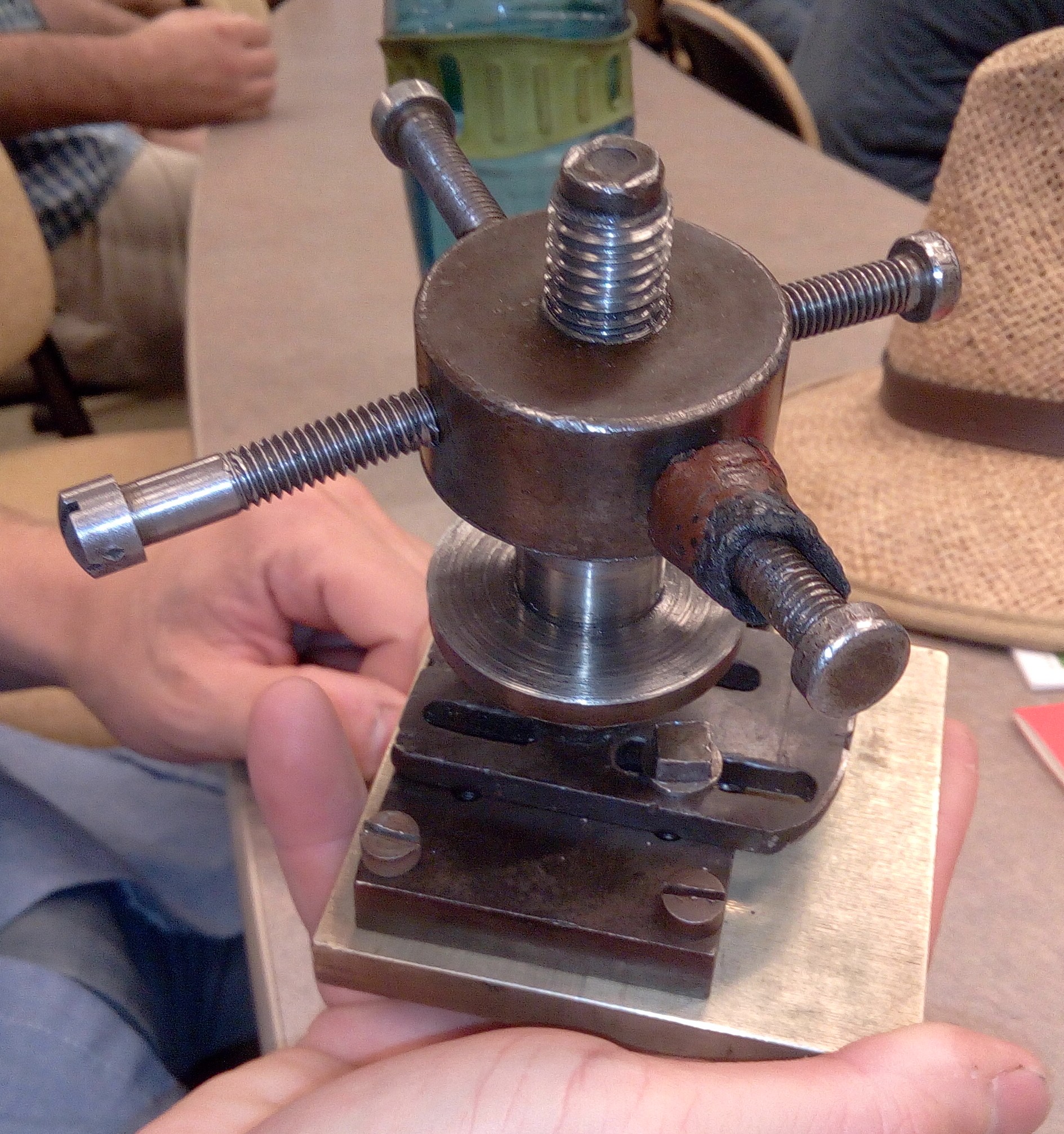 Matrix holder for Greg’s monster caster. The matrix is attached using screws to the large light-coloured adapter plate (or perhaps that is actually a matrix…). To get the matrix tight enough to the mould Greg used a pipe on the capstan “handle” bolts to get enough torque. Similar force was needed to extract the matrix from type that included built-in kerns.

The next presenter was Ed Rayher (of Swamp Press), with An Archeology of Type. The archeology aspect came up in various ways. He presented some lettering from the tomb of Eurysaces the Baker in Rome, and also a project of his producing a revival of the Doves Type typeface. He also mentioned his work with Barbara Henry in developing an asemic (free of semantics, i.e. meaningless) font, where the printed result looks like lines of text but in fact do not contain any known letters, in effect going beyond Lorem Ipsum.

David MacMillan told us about the Nuernberger-Rettig Type-Maker, a slightly-improved pivotal caster. There are only five of these known to still exist: One is in storage at the Henry Ford Museum, and the other four at at Skyline Type Foundry. The improvements over a standard pivotal include a transmission that allows casting speed adjustment suitable to a wide range of type sizes, and a patented mould jet which leaves the jet attachment point inset into the foot of the type, eliminating the need to plow a foot groove to clean off the scar left from snapping off the jet. The type still had to be stacked by hand and dressed, however, just as with most pivotals. David’s presentation slides are available online.

After a short break, Bob Magill presented Dingbats and Ornaments: Is there a Future for Sterling Type Foundry? The Sterling Type Foundry was until recently run by Dave Churchman, who passed away earlier this year. Dave’s son, Andrew Churchman, has apparently taken on the task of (slowly) selling the contents of Dave’s (in)famous “Boutique de Junque” but it was not at first clear what would happen to the type foundry. Bob has come to the rescue, and will be continuing to run the foundry into the indefinite future.

The last presentation of the morning was from Stan Nelson, with the extremely long title Sorting Oneself Out, The Great ‘Tugalong’, A Fan of Heavy Metal, or Pulling One’s Weight; or Exploring the Fine Art of Shoehorning Too Much Stuff Into Too Little Space. He chronicled the construction of his new shop and the adventures and decisions involved in moving into it.

The group then returned to the sauna/dining hall for lunch and rehydration.

After lunch we were back in the comfort of the lecture hall for two more presentations. The first, by Bill Welliver, was A Retro Approach to Automated Type Casting. Type casting is pretty retro on its own, but this talk was about the retro nature of the automation. Bill presented several products from Monotype intended to stave off the death of hot metal due to the introduction of processes such as phototypesetting and computer-based composition systems. Although they were state-of-the-art at the time, they are certainly retro compared to modern systems. These systems and similar ones for linecasters to make them photoset text only added a few years to their lifetime.

The final presentation of the day was Saving the Dale Guild Typefoundry Artifacts from Dispersion: A Story of Distance in Time and Space, by Patrick Goossens, which chronicled how all the equipment from the Dale Guild typefoundry came into his possession. The Dale Guild foundry was created by Theo Rehak with equipment purchased from the auction at the closing of American Type Founders in 1992. After a few years, Dan Morris and Micah Currier purchased the foundry, keeping Theo on to mentor them in all aspects of type founding. Later Micah bought out Dan’s interest in the foundry and in 2013 decided to move it to his original stomping grounds in Salt Lake City. At that time some of the surplus equipment was sold to Patrick, and the remaining equipment was stored in a shipping container where it remained while Micah considered his options. In 2014 he decided to give up on the foundry and sold the whole container of equipment to Patrick. As a result all the Dale Guild equipment now resides in Patrick’s hands in Antwerp, Belgium.

The swap meet was next, in another of the non-air-conditioned buildings, but at least it was directly upstairs from the slightly cooler bar, The Well. I bought a few odd items, including a box of Monotype cellular sorts matrices. 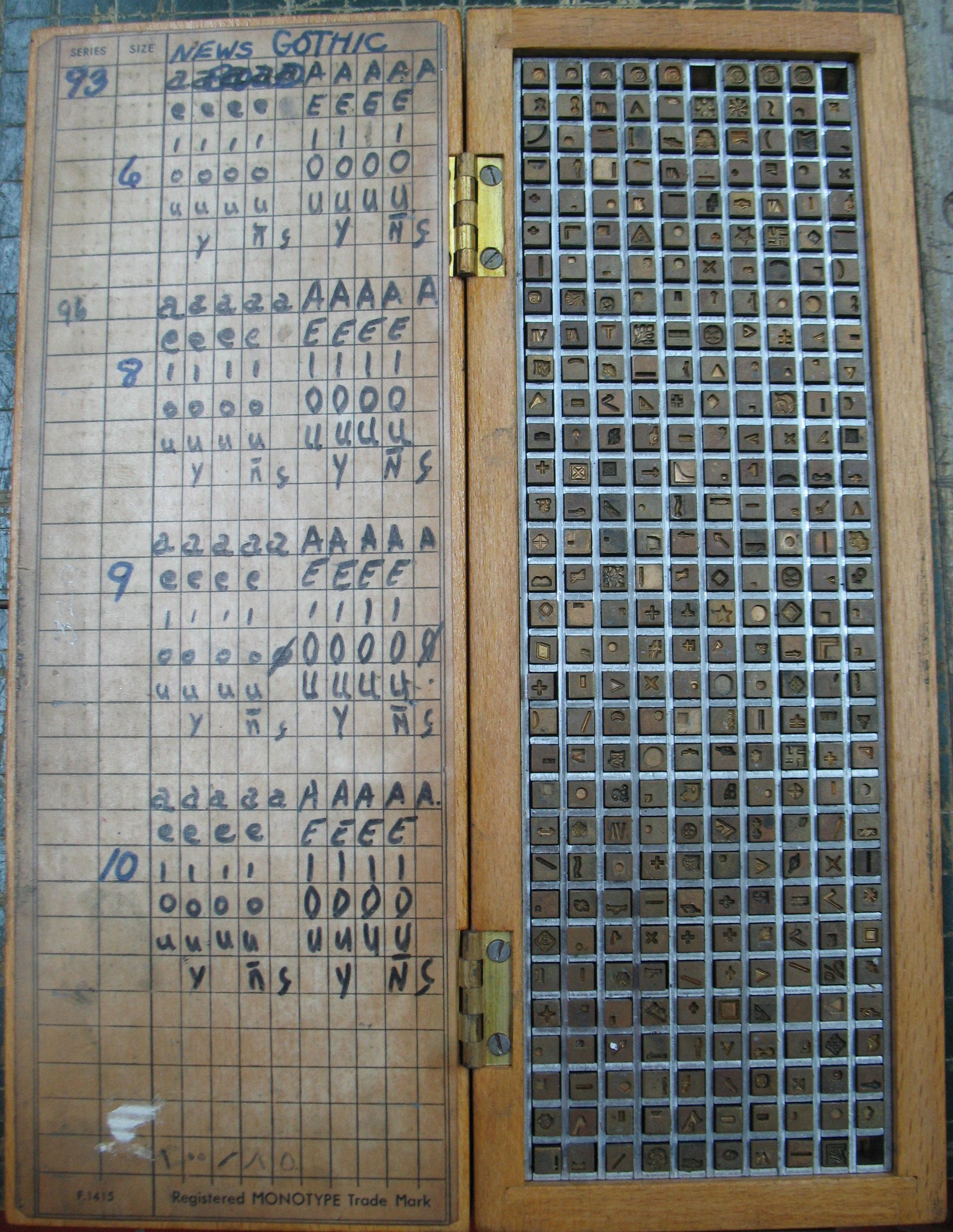 An assortment of symbol and ornament mats in a nice box. The annotations inside the cover are completely irrelevant. The only mats I’ve sorted out so far are the @ signs in the top row.

The swap meet didn’t really take two hours so I took some time to wander about the campus a bit. I found their papermaking studio located in an ex-greenhouse attached to one of the buildings. 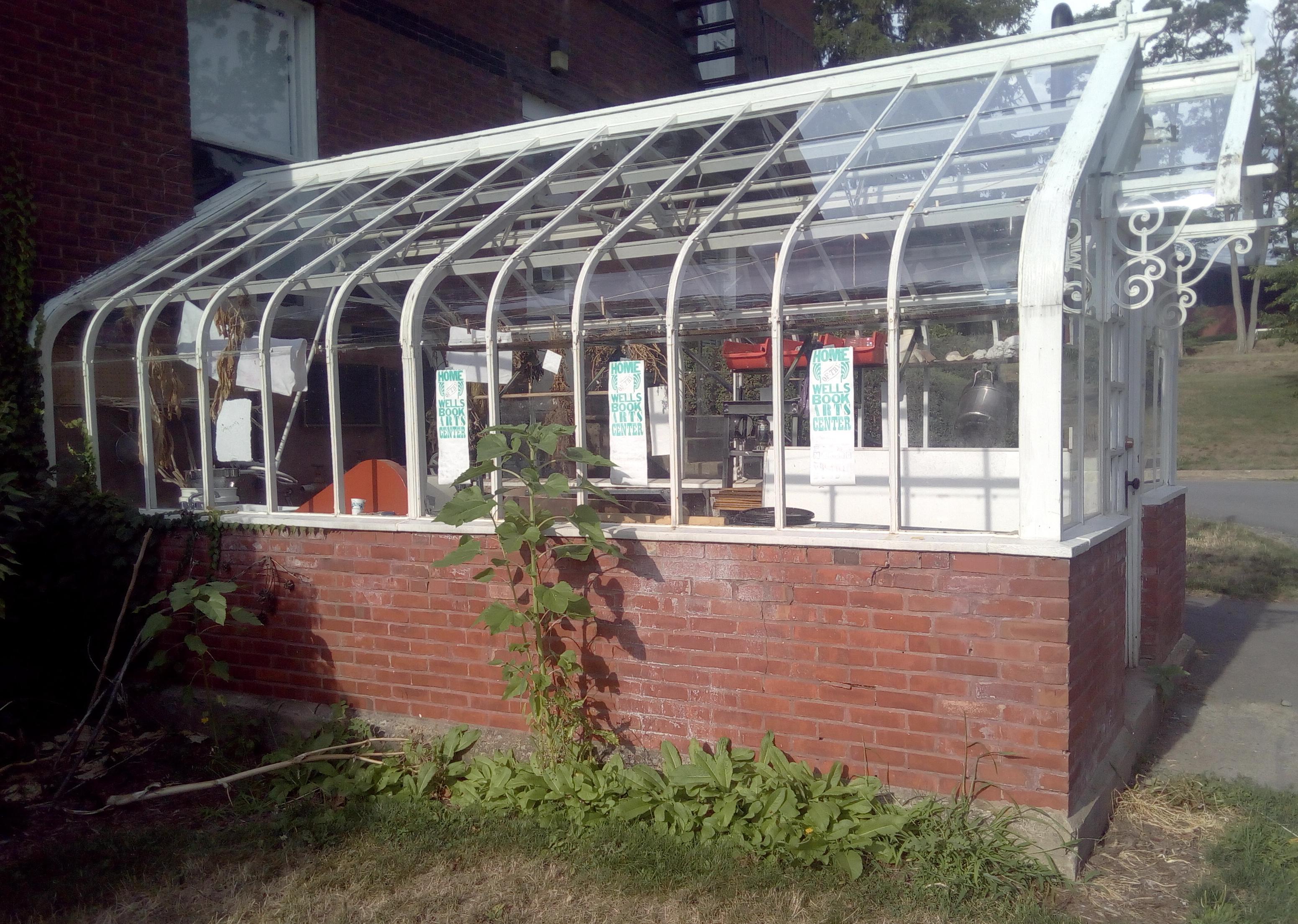 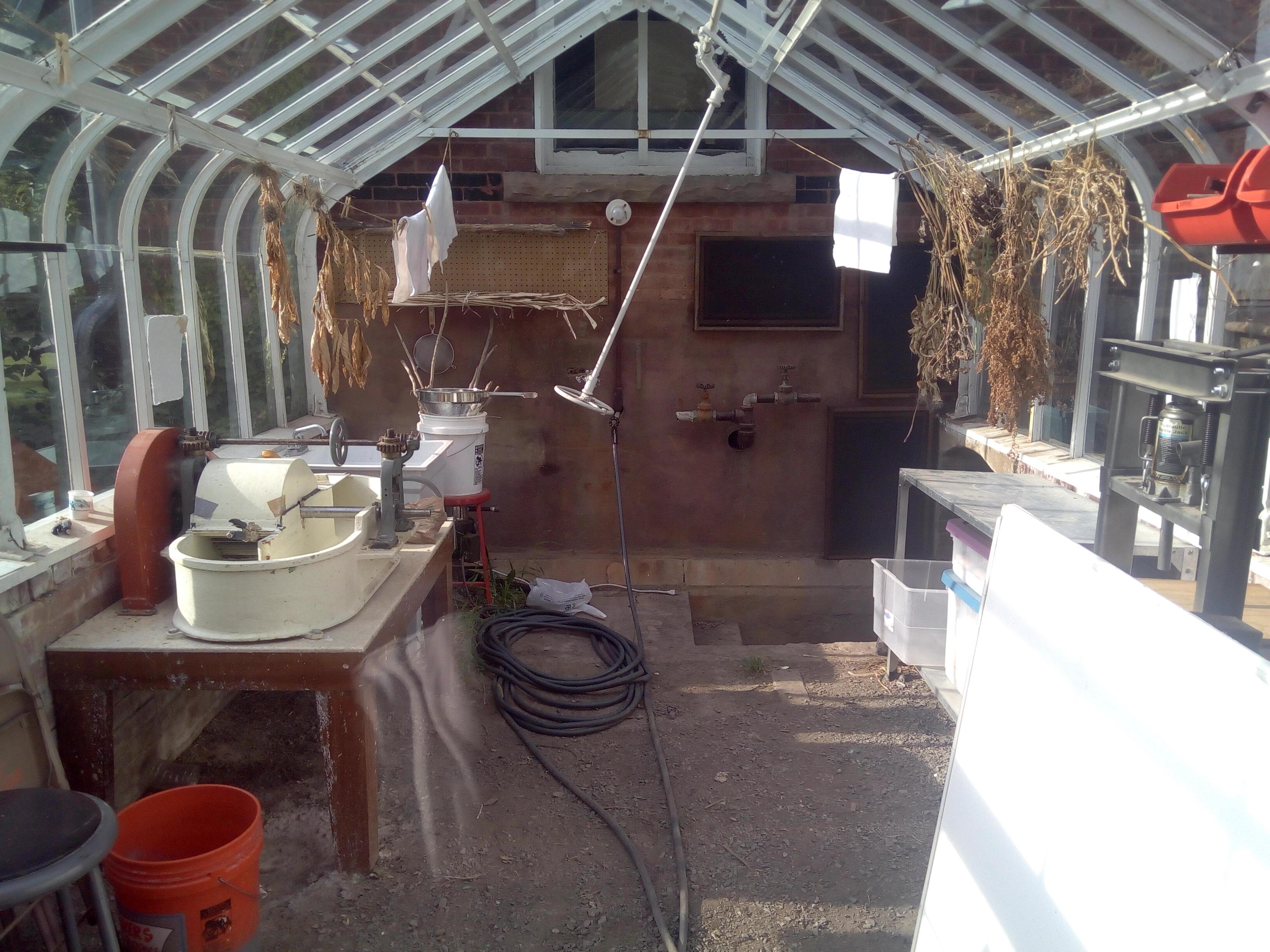 Needless to say, it was not in use during this hot weather.

At the end of the swap meet we returned to the lecture hall for the ATF auction.

The afternoon ended with a visit to the Long Library to see a selection of Victor Hammer‘s punches and matrices. Victor is known, among other things, for producing the typeface American Uncial while he was teaching at Wells College during the 1940’s. 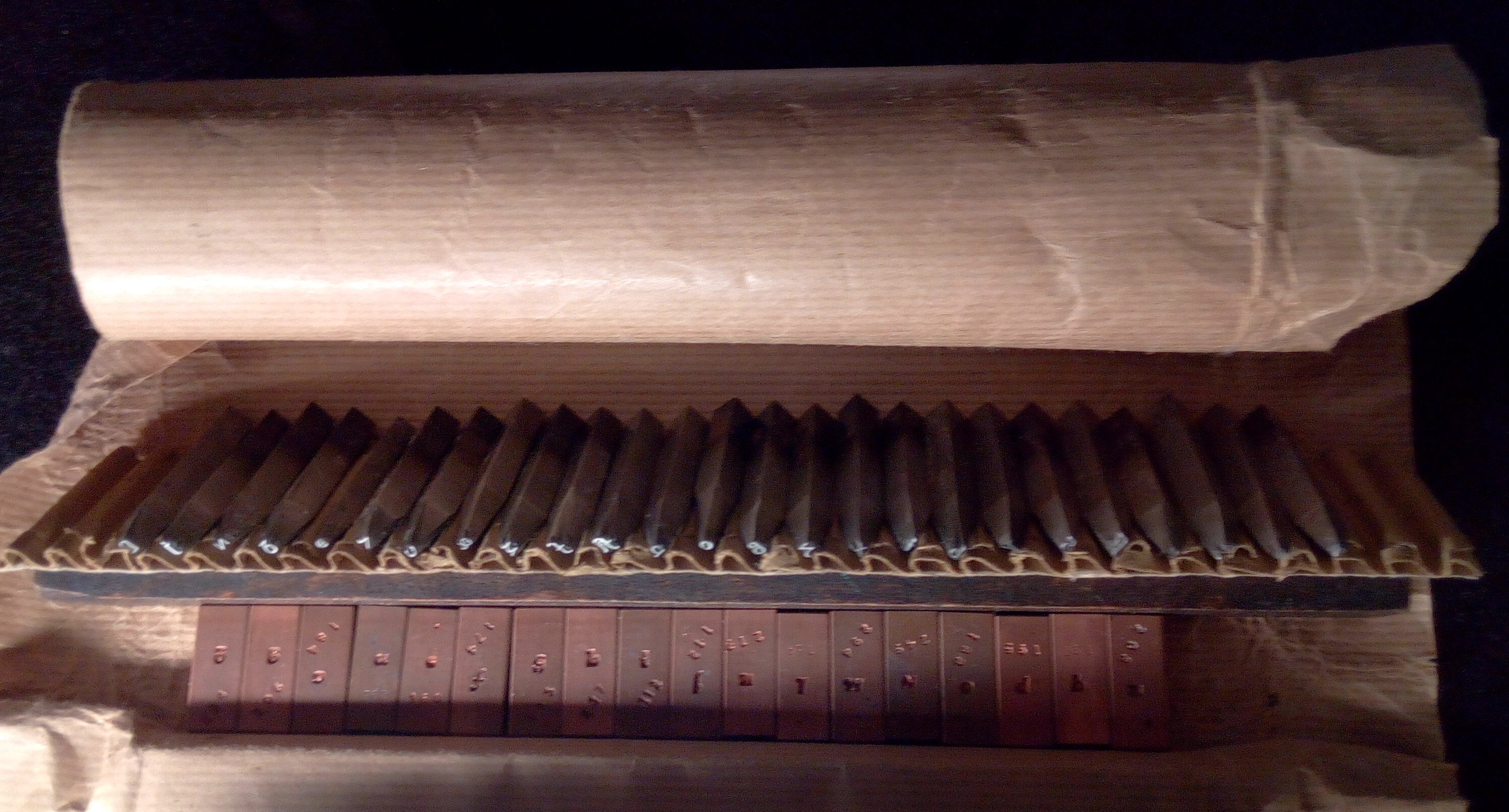 Some of Victor Hammer’s punches and matrices. They were unfortunately behind glass and dimly lit, making for difficult photography.

After a buffet dinner at the dining hall, we had a tour of the Wells Book Arts Center. Most of the rooms were cramped preventing a single group tour so many people went ahead of the tour or stayed behind in some of the rooms that held items of particular interest.

As evening neared, people headed down to the lakeshore near the College boathouse where some took the opportunity to cool off with a swim in Cayuga Lake. We ended the day with a view of the sun setting across the lake.

Swimmers in the lake. Hot as I was, I’m not a strong swimmer so I stayed on the dock. 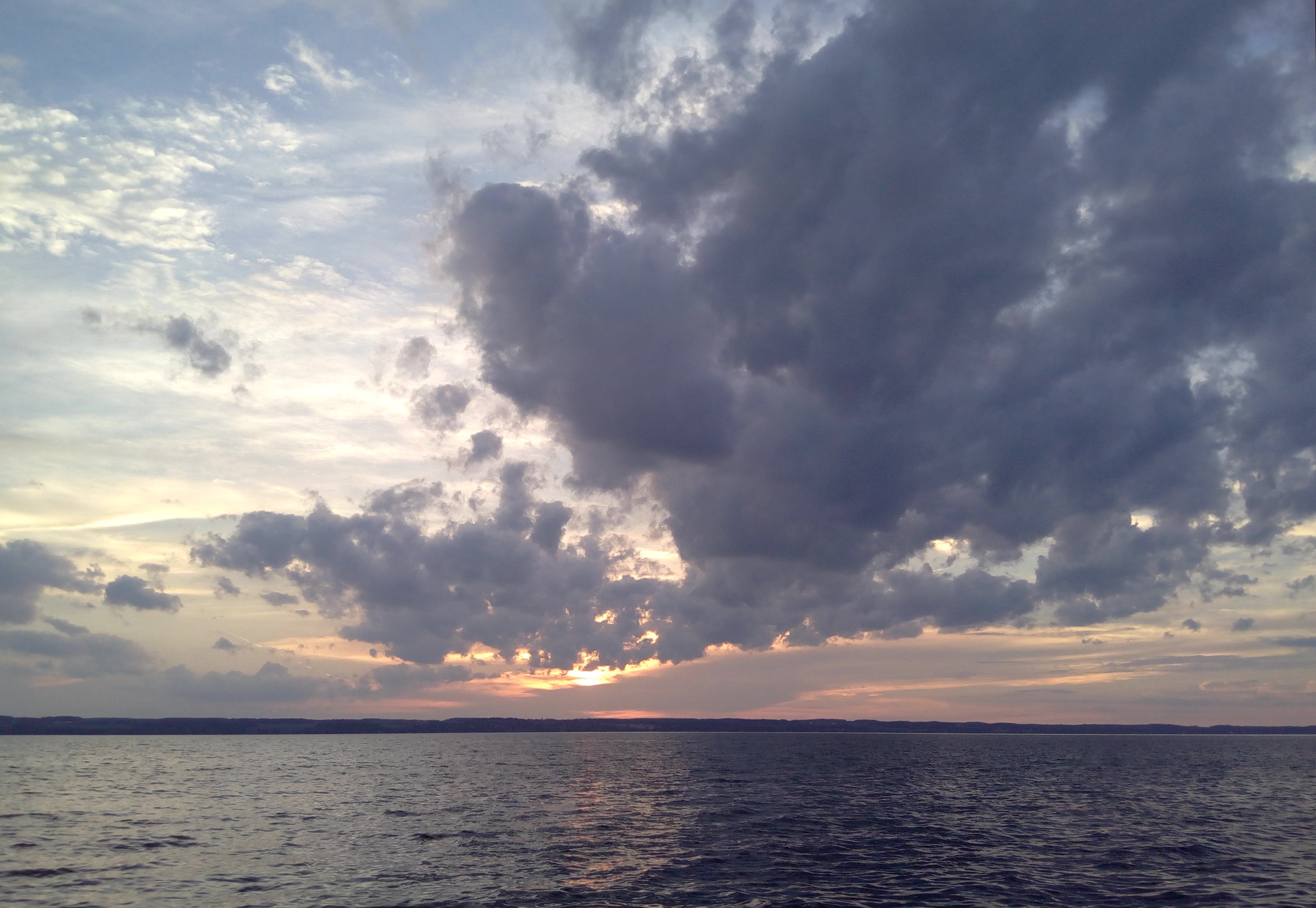 Dramatic clouds made for a photogenic sunset. The sunset was actually listed in the conference program and Richard Kegler was a bit concerned that it might be spoiled by overcast skies.

As I’m writing this three months after the event, I hope I didn’t get too many details wrong!