I recently ran a series of pigment strength tests to compare our current stock with a sample from a supplier, and as I was preparing each sample I noticed that I could see the retention effect of our liquid sizing at work.

Because I’m just comparing one pigment to another at various dosages, I don’t use any retention agent for these tests, but instead rely on the mild retention effect supplied by our liquid internal sizing. This product is an emulsion of droplets of a waxy material in water, and these droplets are deliberately made cationic (with a positive surface charge) so they bind well to the paper fibres which are anionic (with a negative surface charge). A side effect of this is that the emulsion droplets also bind to the pigment (also anionic) and so acts as a bridging retention agent.

The effect can be seen by the appearance of the pulp sample before and after stirring in the sizing. 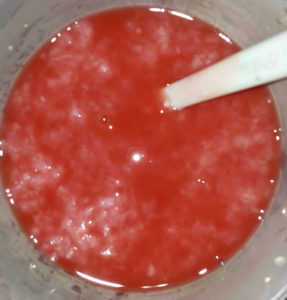 Before sizing was added

Note how the pulp that is right at the surface appears very white, while the liquid is quite cloudy with pigment. You can really only see the pulp fibres that are very near the surface. 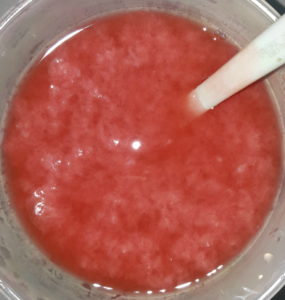 After stirring in the sizing

Once the sizing has been added you can see two effects: One is that the pulp fibres themselves have taken on the pigment and are no longer so white. The other is that the liquid is much clearer than it was: you can actually see pulp fibres through the deeper water.

This is by no means perfect retention; if it were, the water would be completely clear. However, this does illustrate the effect of retention on the pigments. Clear water in the pulp indicates good retention.