The Monotype caster type carrier not only catches the type as it ejects from the mould and carries it to the type channel for final delivery, but it also moves the mould crossblock between its casting position and its jet-eject position.

A coupling hook on the crossblock provides the linkage between the crossblock and the end of the type carrier. The carrier itself operates in one of three positions: The standard position is for type up to 12 (13? 14?) point to be delivered in lines to the galley via the straight type channel. The second position is for casting loose display type: It offsets the type carrier about 12 points to the right so it can receive the wider type as it ejects from the mould, but it also delivers the type about 12 points to the right at the type channel so it must be used with the curved display type channel. The third position is for large composition and has increase stroke so the right end of the motion can accommodate the wider type while the left position still aligns with the straight type channel for galley delivery.

This third position can also be used with the display moulds (as opposed to large comp moulds) except for one problem: To account for the offset second position of the type carrier, display moulds have a slightly shorter crossblock. If you try to use them with the third position of the type carrier, the machine will cast type but you’ll have quality problems because the jet, where the molten metal enters the mould cavity, will not be aligned with the pump nozzle and so there will be a lot of turbulence filling the mould.

To address this problem Monotype produced a special display mould coupling hook, part code 50B1, which shifts the mould crossblock a bit so the jet is properly positioned. These parts seem to be impossible to find so after several years of looking, I finally made myself a couple of them: 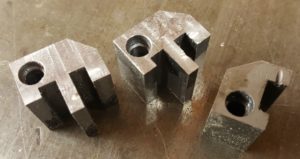 Here are the two hooks installed in display moulds along with a third mould fitted with the standard hook (left):

Even though I had carefully measured the standard hook and extrapolated the shape of the display hook, the parts I made still did not quite fit onto the moulds. It turns out there is some sample-to-sample variation in the standard hooks and the one I had started with was at the large end of the range of variability, so I had to adjust my parts a bit. Even the standard hooks are not 100% interchangeable between moulds.

I made these from an offcut of D2 tool steel I had kicking around. If I wanted to I could have these heat-treated to harden them, but the steel even in its annealed state is still pretty tough and should be able to last through what little use it may see. The steel piece I started with was just barely big enough so the underside of one of the hooks actually has a dimple in it from a drill hole that I couldn’t quite machine out.

My caster is currently partially fitted for strip casting so I haven’t been able to try these hooks in action yet.