I just found these photos from a papermaking session from the summer of 2019 and thought I might post them.

We had recently emptied a mini-keg of red 112 aqueous pigment, and we were left with a dirty keg. We decided to put a batch of pulp into the keg and swish it around to use up the pigment stuck to the sides.

It turned out there was way more pigment than we expected, and we ended up with a batch of really red paper. With that much pigment, getting 100% retention is nearly impossible, so there was red everywhere. The shop looked like a murder scene (and Audrey was “caught red-handed”)! 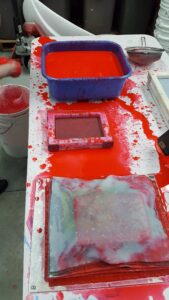 The paper ended up being a nice saturated Christmas-y red (photos would not do it justice).

We actually used the drain water and vat water to pigment another batch of paper which ended up almost as red.

Now, after several re-uses and rinses, we can finally use the felts without getting some pink staining in the paper.