I was recently casting some 14-point Caslon Old Style on my Monotype Composition Caster and I was finding that after casting a long run of some wider letters, the type was coming out with an interesting distortion: 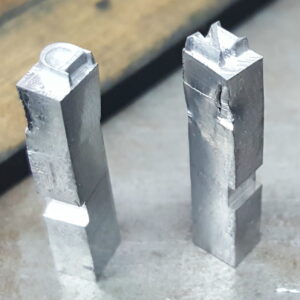 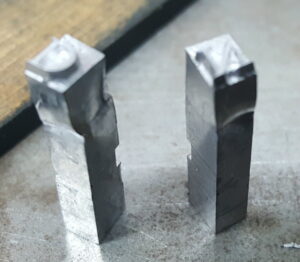 However, the main cause is the type coming out of the mould too hot. This was using Monotype medium alloy, which has a fairly wide temperature range over which the metal is no longer fluid, but has a pasty consistency and almost no strength. It would seem the metal was still pasty as it was ejected from the type clamp, making it easy to damage. This would also explain why it only happened for the more frequent letters in the font. After casting each letter, there would be a pause while I changed the matrix and possibly adjusted the width, giving some time for the mould to cool off a bit. As a result infrequent letters like Z would not have any problem. But for letters such as D and N which require dozens to be cast the mould would heat up as the casting proceeded, eventually ejecting too-hot type. There was no problem for narrower letters because the rate of metal injection would be lower, leading to less mould heating.

I solved the problem by lowering the pot temperature a bit and making sure I had sufficient cooling water running through the mould. I was already running the caster at the recommended speed for this size so, although slowing the caster down would have helped too, I did not do that.

This was a different problem from the usual bulging sides and/or bleeding feet that normally result from type ejecting too hot.