Posted on 2021/11/20 by kpmartin Posted in Equipment Acquisition, Repair, and Maintenance, Kevin, Printing presses — No Comments ↓ 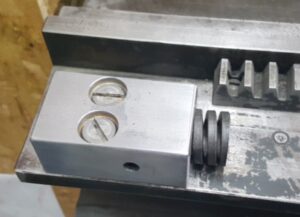 As part of getting a Vandercook 320 proof press into working condition, I had to make a carriage stop/bumper block. One of the original ones was missing from the press. Another of the stops was held on with only one screw, the other having snapped off.

I have posted a video of making this on YouTube.

Since installing the carriage stops, I have also adjusted the timing of the impression drum. On this press this can be done by rolling the carriage completely off one end of the press, having removed the stops and arranged for something to catch the carriage, which weighs perhaps 2-300 lbs (100-150kg), and rolling it back on engaging the drum gear in a new position.

I chose to use the other method available: I removed the two pins that the print drum bearing plates pivot on when shifting from trip to print position. This allowed me to use a piece of wood as a lever to raise the drum to clear the gear racks and lower it down again at a new position.

The next job is to re-install the inking mechanism on the carriage, and also the inkplate and headbar on the press bed.