Last Saturday was the inaugural Howard Iron Works Print Expo & Fair, where we had a table selling our paper and second-hand books on topics relating to the book arts. The show was hosted by Howard Iron Works, a restorer and museum of old printing equipment affiliated with Howard Graphics.

The tables for the fair were set up in the workshop, which had just undergone two days of cleaning and was spotless. I guess we aren’t the only people who are motivated to clean by the threat of company coming! 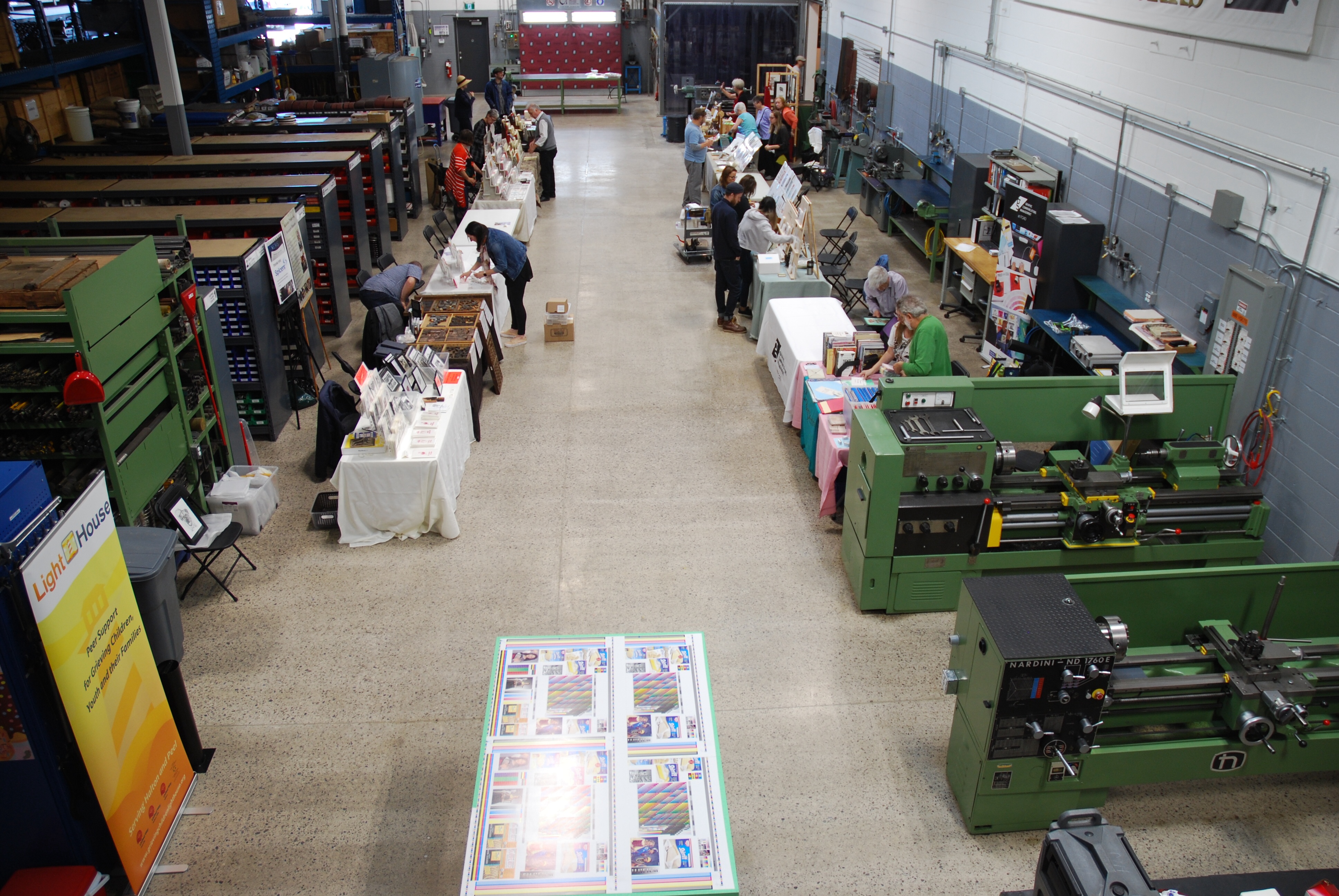 Setup time in the workshop before the fair. Our table is the first on the right, just behind the green lathe. Photo by Liana Howard. 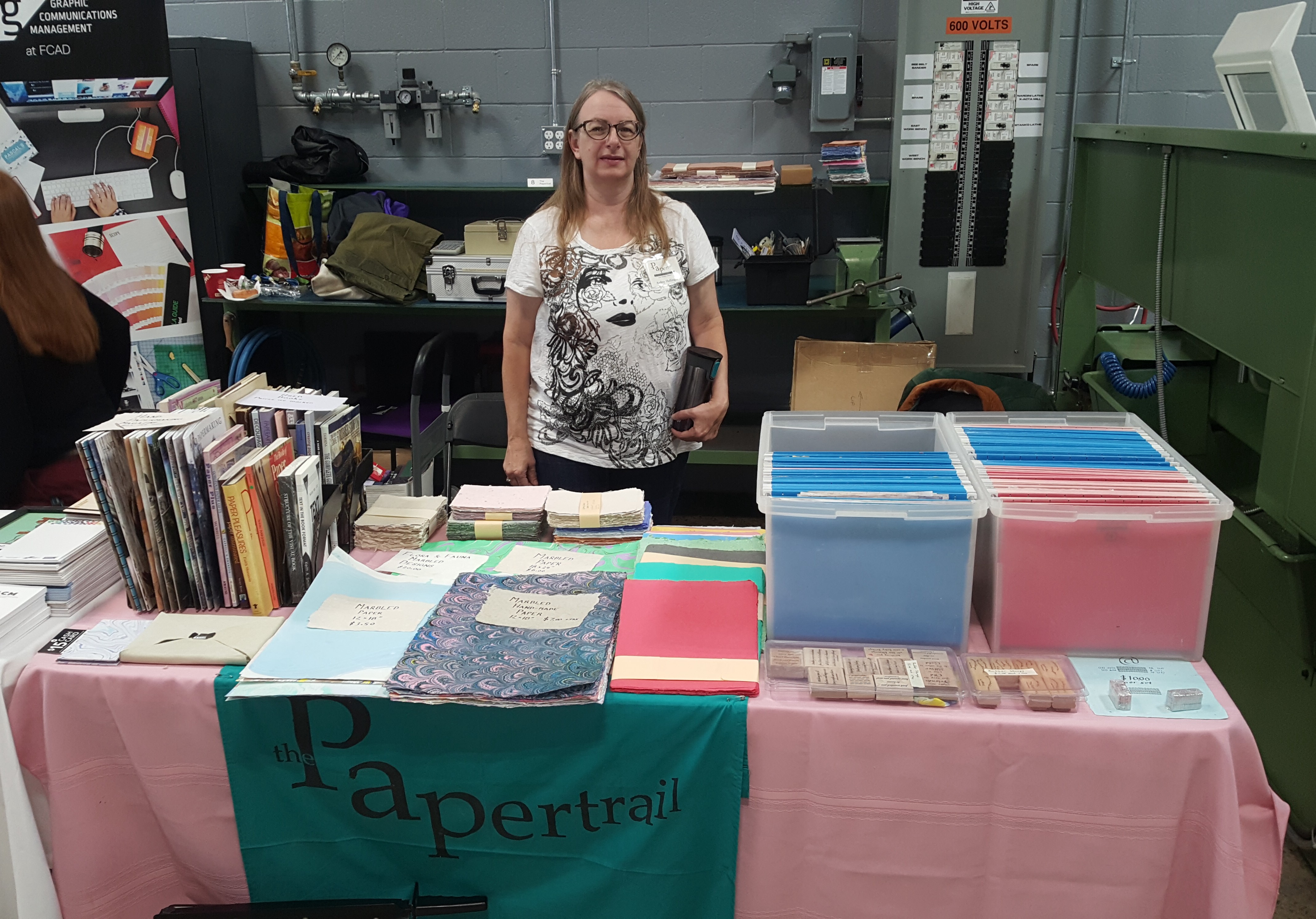 Audrey minding our table and her mug of tea

The museum itself is amazing! The front room contains the best showpieces: There were eight or so iron presses including a Hoe Washington, a Colombian, and an Alexandra, and a few platen presses including a Pearl and a Curtis & Mitchell. There was also a cylinder press, an etching press, and many other smaller press-related items. 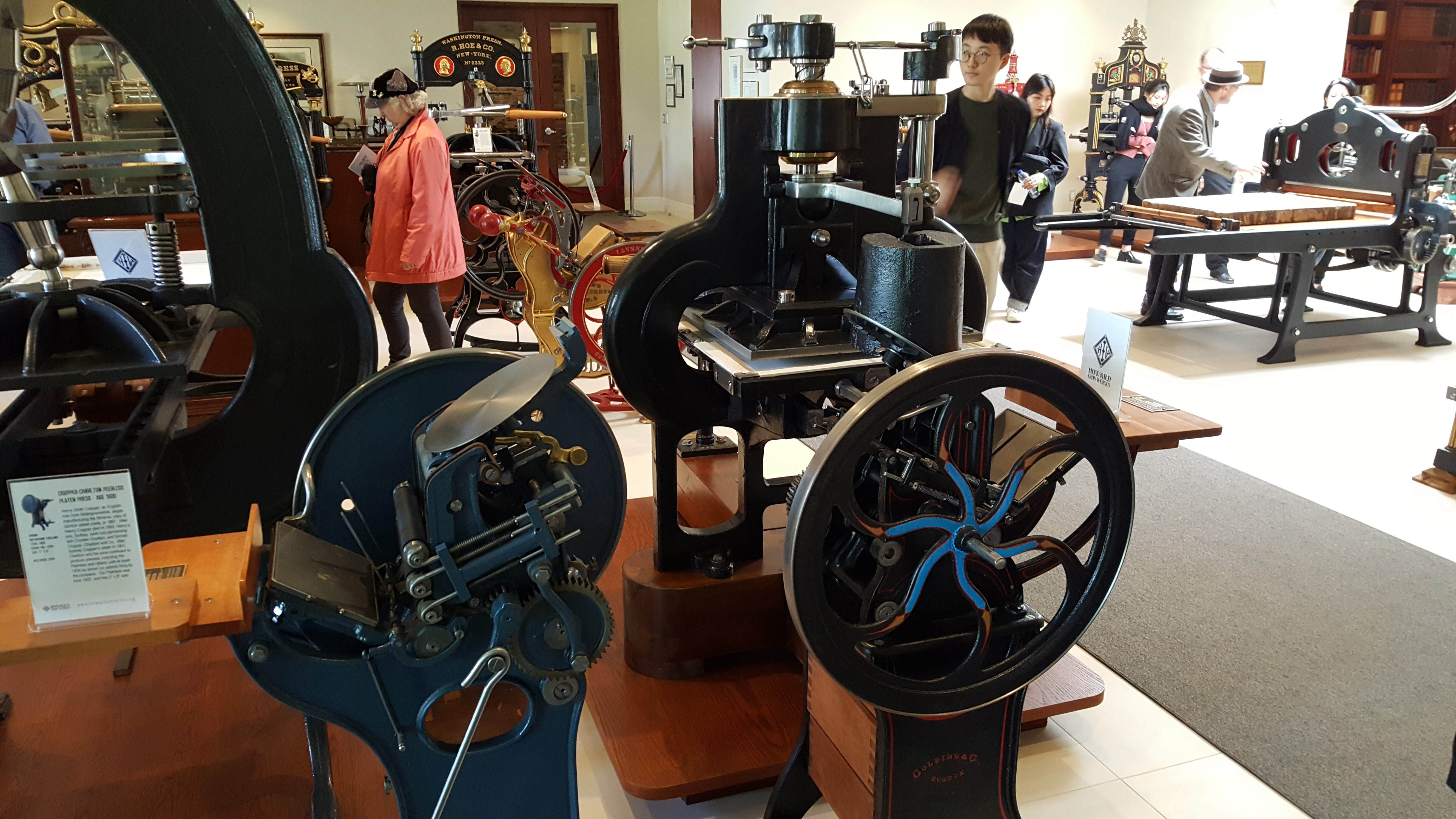 Some of the presses in the front room 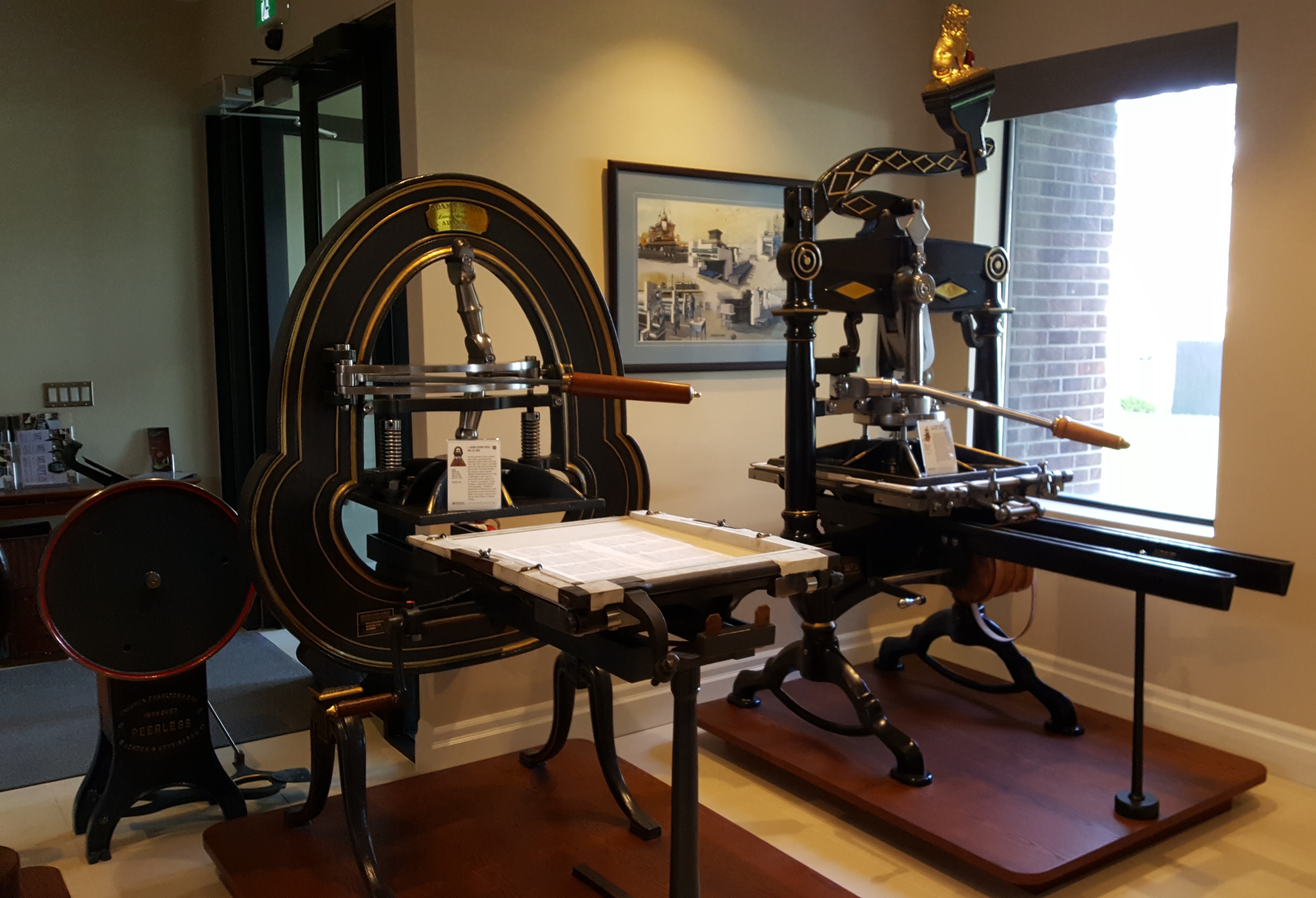 More iron presses, and a Peerless platen to meet you at the door

The back room had much plainer decor, but was also much larger, and contained easily a hundred presses and related machines. The room was divided into perhaps six bays, and here are some of the machines on display in two of them: 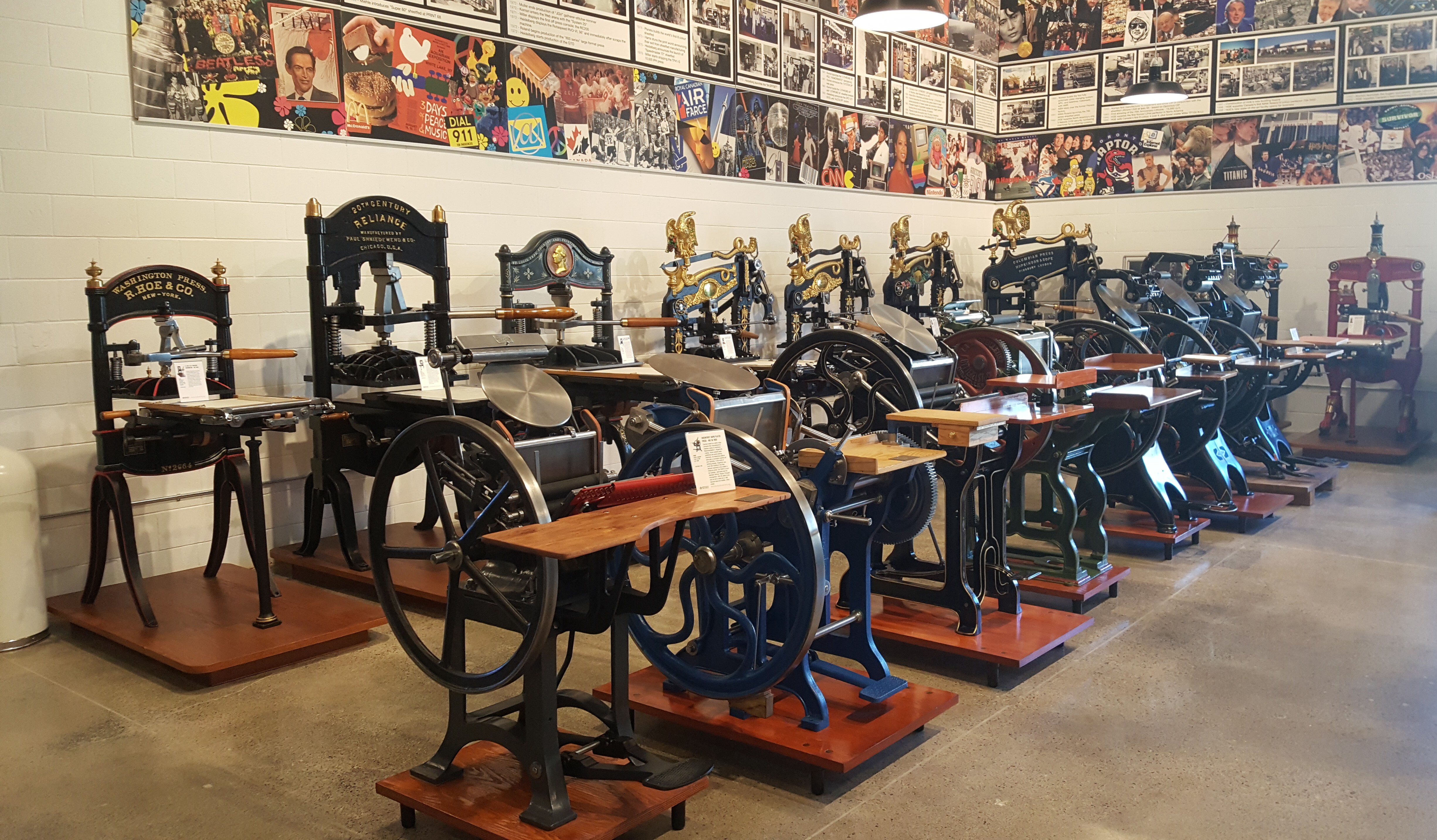 One bay in the back room, filled with iron presses and platen presses

Another bay, containing guillotines, bookbinding presses, a rotary pin perforator, and in the foreground, a very compact and photogenic sheet-fed rotary press.

The show had a good turnout, especially considering that this is the first year of what we hope will be an annual event. This was done in coordination with the local Doors Open event, so it is hard to tell how many people came for Doors Open and stayed for the fair, and how many actually came for the fair itself.