Posted on 2013/05/17 by kpmartin Posted in Book Arts Guild of Richmond Hill, Equipment Acquisition, Repair, and Maintenance, Kevin — No Comments ↓

The Vandercook SP-15 proof press at the Book Arts Guild of Richmond Hill is equipped with a washup unit. This is essentially a blade that wipes the ink off one of the rollers in the ink train and a tray to catch the ink that comes off. The original blade on this washup unit was badly chipped and as a result did not work effectively, so a couple of years ago I replaced it. The old blade was a fairly stiff plastic (I suspect it was nylon) and I could not find 1/16″-thick nylon anywhere so I had to use PTFE (“Teflon”) instead. I cut a bevel on the edge of the strip and put in place of the original one. It worked a lot better but still not as well as it should so this week I took another look at the situation: 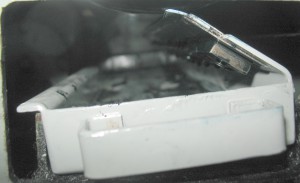 The first photo shows the washup unit in its idle position below the powered ink drum. The blade (white) is not quite touching the drum. Engaging the washup unit (second photo) raises the right side of the tray causing the blade to press against the drum and wipe off its ink film. Ink on the rest of the ink train gradually transfers to this drum so eventually all the ink should be wiped off. If you look closely, however you can see that the PTFE blade is flexing so much that its edge is not contacting the drum; instead the heel of the bevel is on the drum. This makes the wiping much less effective and causes some of the wiped ink to run off the upper side of the blade and thus not get caught in the tray.

I took out the washup unit and cleaned most of the dried ink off it, and tried the simplest solution: I reversed the PTFE blade so the bevel would face down. This would mean the blade would have to flex quite a bit more before its edge was lifted off the drum surface. Here are the same photos after reversing the blade: 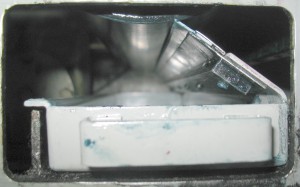 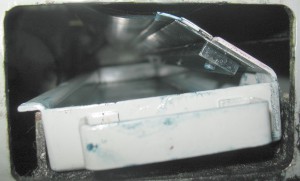 The blade is still flexing when engaged, but now at least its edge is still the part doing the wiping. This has improved its effectiveness but it is still not ideal. I would like to increase its pressure against the drum by raising the tray more but this would only flex the blade more.

My next try will be to make the PTFE blade narrower and adjust its metal holder up to compensate. This will reduce the width of the unsupported PTFE and thus reduce the flexing. If this still fails to give good results I may try a brass blade instead.