Posted on 2013/05/17 by kpmartin Posted in Moulds and Deckles, Other people, Sheet forming, Us, Vats, Yahoo Papermaking Gatherings — No Comments ↓

Back in June 2010, we all headed out to Prince Edward Island for the first East Coast Gathering of members of the Yahoo Papermaking group. Our gracious hostess was Linda McCausland who runs Heron Cove rental vacation house, where the Gathering was held.

One thing I did was make a batch of washi using traditional techniques. Because the weather was a bit unreliable, I set things up in a garden shed. 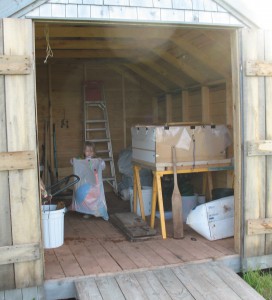 This is the interior of the shed, with Lily having just discovered a bag of beach toys. 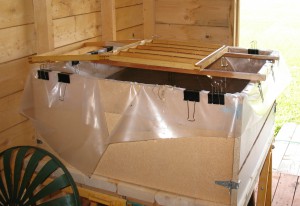 This is the knock-down vat I had brought along. The four sides are held together by loose-pin hinges and sit on a base of 2×6 planks on sawhorses. A liner of 6 mil polyethylene with neatly-folded corners is held on by bulldog clips. The clips also act as stops for the two support sticks both for pushing them apart to form a sheet and also for pushing them together to support the sugeta. The sugeta itself consists of a home-made keta (frame) and a su (screen) from Magnolia Editions. 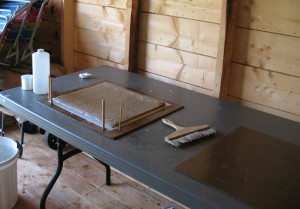 This is the post of formed sheets. There are no felts separating them, but fishing line is run between the sheets along the near edge to help separate them after pressing.

After poor results using the plain bamboo su on the previous day, this time there was a layer of fine screening attached to the su, and as a result I got reliable couching of the sheets. We had made a run into town to a sporting goods store to buy a fine mesh bug jacket, which was then cut up and pieces distributed to attendees as needed. I used a large piece from the back of the jacket cut to match the size of the su, and attached it with the sort of bright red tape that is used in construction to seal vapour barrier and insulation board seams. It was only attached to the near edge of the su, and surface tension kept the rest of it in place.

Audrey took the following short video of me making a couple of sheets, with Lily (3 years old at the time) adding some background sound effects and music.

Although the paper couched fine, after pressing I was unable to separate individual sheets so instead I peeled off double sheets. Although I didn’t get the nice fine paper I was hoping for I still consider this a success since it was only my second or third try at making washi.