Cleaning the “Scissors” on a Monotype Display Mould

While waiting for other things to resolve themselves, I set out to clean the display mould that I has last used on my Monotype caster. This particular mould is an English-style display mould, which uses replaceable inserts to change body size. 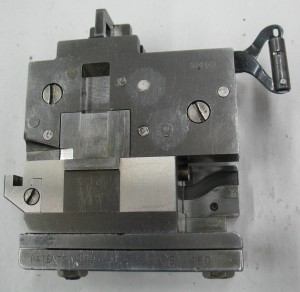 Both these and the American-style display moulds use a pair of levers which vaguely resemble a pair of scissors to control the upper mould blade. In normal usage, a spring box is positioned between the “handles” of the scissors to push them apart, which forces the upper mould blade to open in unison with the lower blade, for casting normal type. For casting low quads, the spring box is swung around to press against the mould oiler fitting, thus forcing the upper blade closed at all times.

The spring box on this mould had become seized, with the plunger stuck in and no spring action, so I disassembled it to clean and lube it. A rivet holds this together, so I had to carefully file the head and peened end so the rivet could be driven out.

The rivet and arm were now out but the plunger was still stuck. Fortunately there was just enough of the plunger showing through the arm slots that I could grip it gently with a pair of wire end-cutters and work it out. The spring then came out as well, with a cake of oily rust covering about two of its turns. 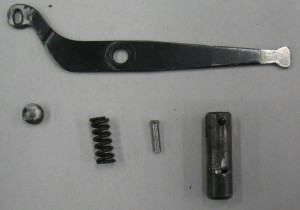 The plunger, spring, home-made rivet, and tube, all shown below one of the arms.

I cleaned the parts first with solvent, then with a soak in Evapo-Rust. I also felt that it should be possible to oil these properly so I added an oil hole to the tube. Either this is very hard steel or I had the misfortune to try the two dullest drill bits in my shop, but I was unable to drill a hole. Instead I used an abrasive cutting disk on my Dremel to cut a groove that penetrated to the inside of the tube.

I made a replacement rivet on my lathe, reassembled everything, and finished putting the cleaned mould together. The photo of the mould, above, is actually an “after” photo where the oil hole I added can be seen. 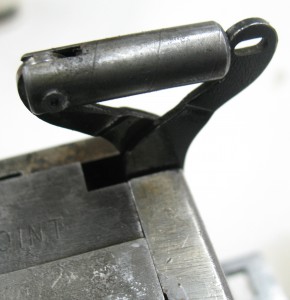 The spring box and lever arm ends viewed from the underside of the mould. This shows the peened end of the rivet.

2 comments on “Cleaning the “Scissors” on a Monotype Display Mould”