Posted on 2014/02/01 by kpmartin Posted in Equipment Acquisition, Repair, and Maintenance, Kevin, Monotype Composition Caster, Other people — No Comments ↓

After installing my refurbished 10-point mould on my caster I tested the cooling water flow and found that the flow through the mould itself (rather than just the cooling passages in the table) was inadequate.

I know from when I had the mould in pieces that the water passages had been plugged completely with rust. I managed to clear them at least somewhat using a piece of stiff wire—the end left by the wire cutters proved to be good for drilling through the rust. However, not all the passages in the squaring plate could be cleared this way since they were not straight, and the plugs sealing off each straight section could not be removed. 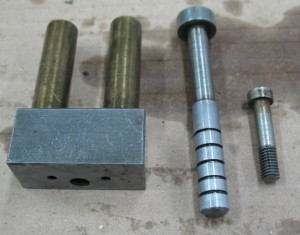 It turns out there is a tool for clearing these water passages by forcing fluid through them with much more pressure that the cooling piping supplies. This tool is bolted to the underside of the mould and connects the two coolant ports on the mould to the two open brass tubes on the tool.

The piston (at the center of the picture) is a close fit in the brass tubes and can be used to force fluid through the cooling passages of the mould.

This particular version seems to have been mass-produced, as I know Rich Hopkins has several of them (I got mine from him). However, I also have a much cruder one which appears to be someone’s attempt to make their own. 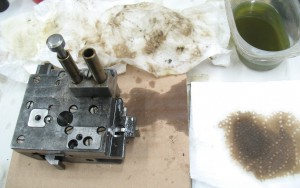 The second photo shows the tool mounted on the mould. The mould itself is upside down on a piece of triple-wall corrugated cardboard to protect its top surface.

The paper towels in the photo show some of the dirt and rust I extracted.

The first fluid I used was some Evapo-Rust, which would to some extent dissolve the rust and loosen more of it. This seemed to flow fairly well, but it was still clearly loosening some rust.

After draining the Evapo-Rust I switched to heavy lubricating oil, which could generate more internal drag to break away more rust.

After a couple of passes with oil, I did two more passes with odourless paint thinner to clear out the rust-laden oil.

I re-installed the mould on the caster and tested the water flow again. I was still having trouble getting flow through the mould. Thinking the piping might be blocked somewhere, I removed one of the plug screws from the water fitting on the side of the table. The screw I removed was the one closest to the front of the machine, which lines up with the outlet of the mould cooling loop. A couple of seconds after removing this screw, water started to flow from its hole, so I put the screw back in place.

I now had water flowing through the mould. Perhaps the narrow oily water passages were sufficiently hydrophobic to prevent the water flow from starting. Essentially the water was being held back by its own surface tension.

So I think I have everything ready to go now. Except that the handle has fallen off the ball valve I installed on the water line…