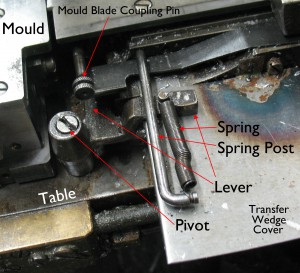 The Monotype caster has a small lever which is used to control the opening of the upper mould blade to produce low spaces. This lever is actuated by an arm that descends from the bridge, which in turn is controlled by the presence of a mat with a shallow cone hole.

An alternative version of this lever is straight, and is used with an English bridge and American moulds.

I had been trying for ages to get this lever off my caster (as evidenced by the mangled screw head on its pivot) but with no success.

As I found out on last summer from looking at Rich Hopkins’ casters at Mono U 8 this pivot pin has no head. The lever should just lift off it!

So a few weeks ago when I had a bit of time to spare, I tried once again to remove it. With its spring, spring post, and the mould removed the lever should be clear to lift off. The damage to the top of the pin from by previous removal attempts might cause a bit of trouble, though.

I sprayed some solvent onto the pivot pin, and gradually managed to work it up, first getting a putty knife under it, then a small screwdriver, followed by larger ones. Finally the arm popped off, and it appears that it was just dirt and hardened oil that was holding it on. Once I cleaned the lever and post and re-oiled things it slipped on and off easily, although it is necessary to turn it to just the right position partway up to clear other parts. It also turns easier now.

While I was working on this I also closed up the loops at the ends of the spring so it would not accidentally fall off and end up on the floor. This happened to me once here and also happened to us several times at Mono U.

The pivot pin itself is still seized in the table, but that should not be a moving part anyway.

This puts me one step closer to using my English bridge should I choose to do so.