Posted on 2016/11/27 by kpmartin Posted in American Typecasting Fellowship, Conferences and Meet-ups, Kevin, Past Events — 1 Comment ↓

I opted to attend the two technical sessions at the Bixler foundry.

Michael and Winifred Bixler run their foundry and private press in a beautiful old building on the northern outskirts of Skaneatales. 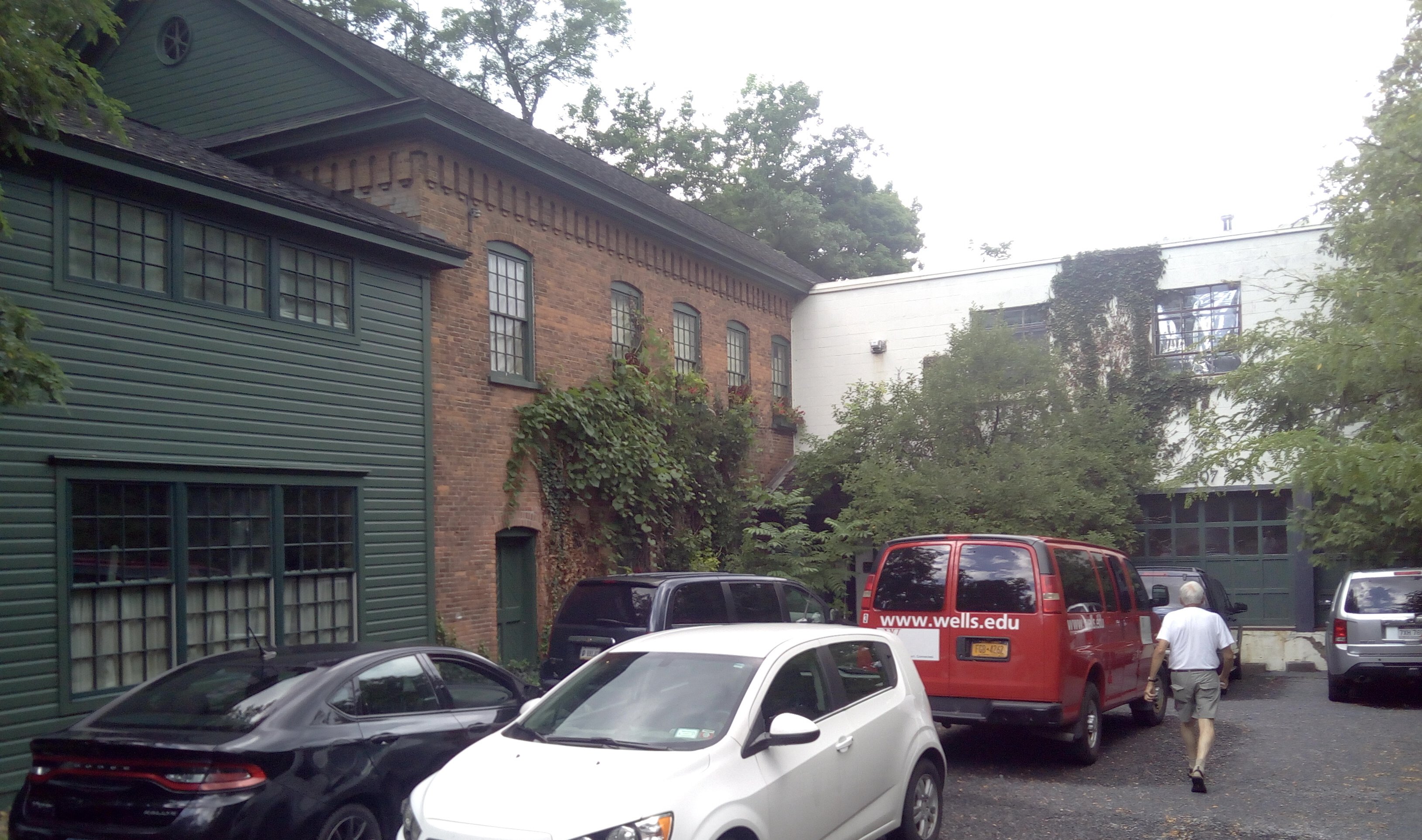 The number of participants in these sessions was limited, and pretty much the same people signed up for both sessions, so the workshops were combined into a single day-long event. The schedule for the day was altered a bit, starting with Mike describing his casting equipment and his approach to using and maintaining the machines. 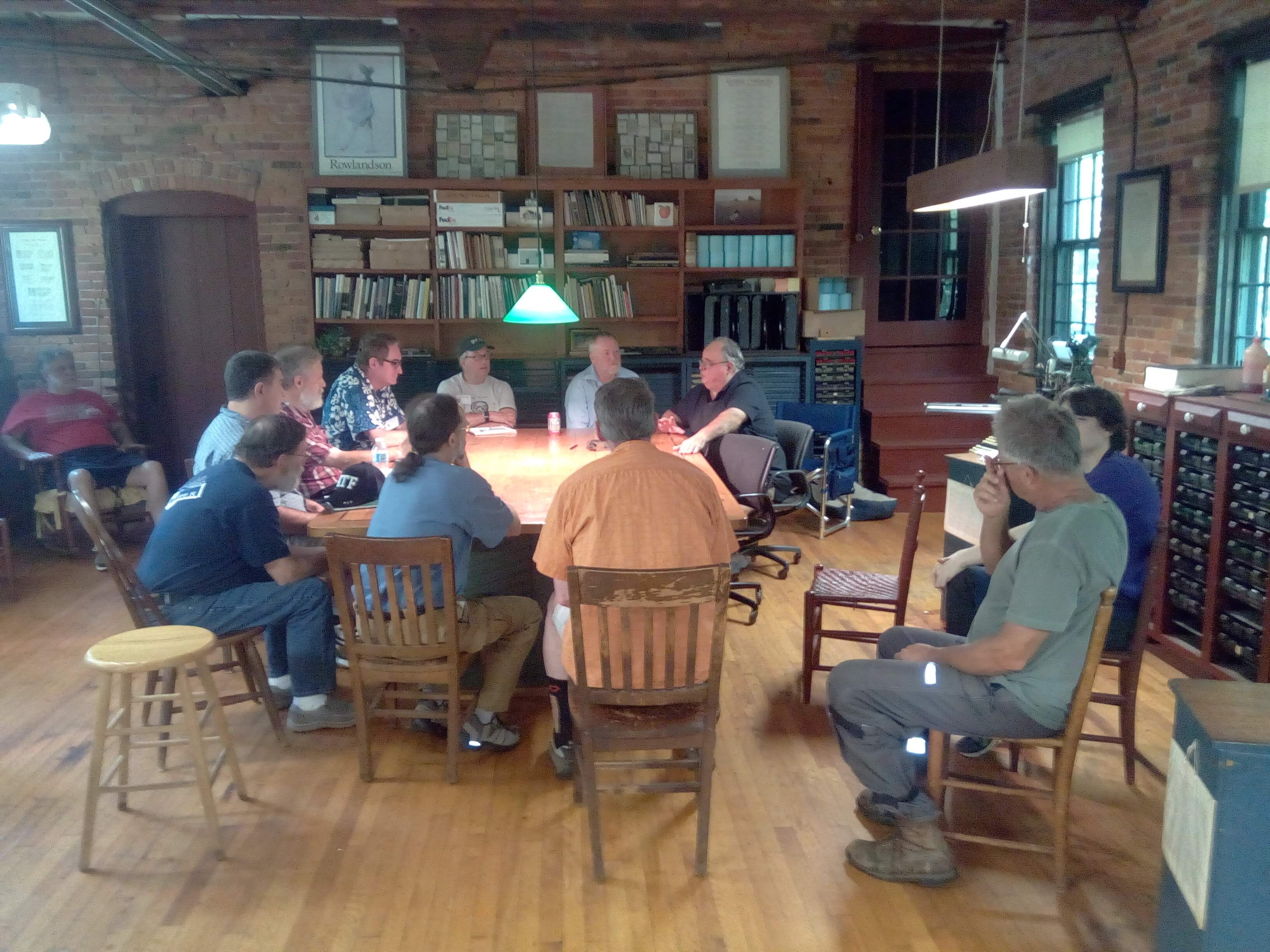 Talking about running casting equipment. That’s Mike in the dark shirt at the far end of the right side of the table.

After this we took a break to stretch our legs, maybe grab a quick lunch in town, and visit the rest of the foundry: 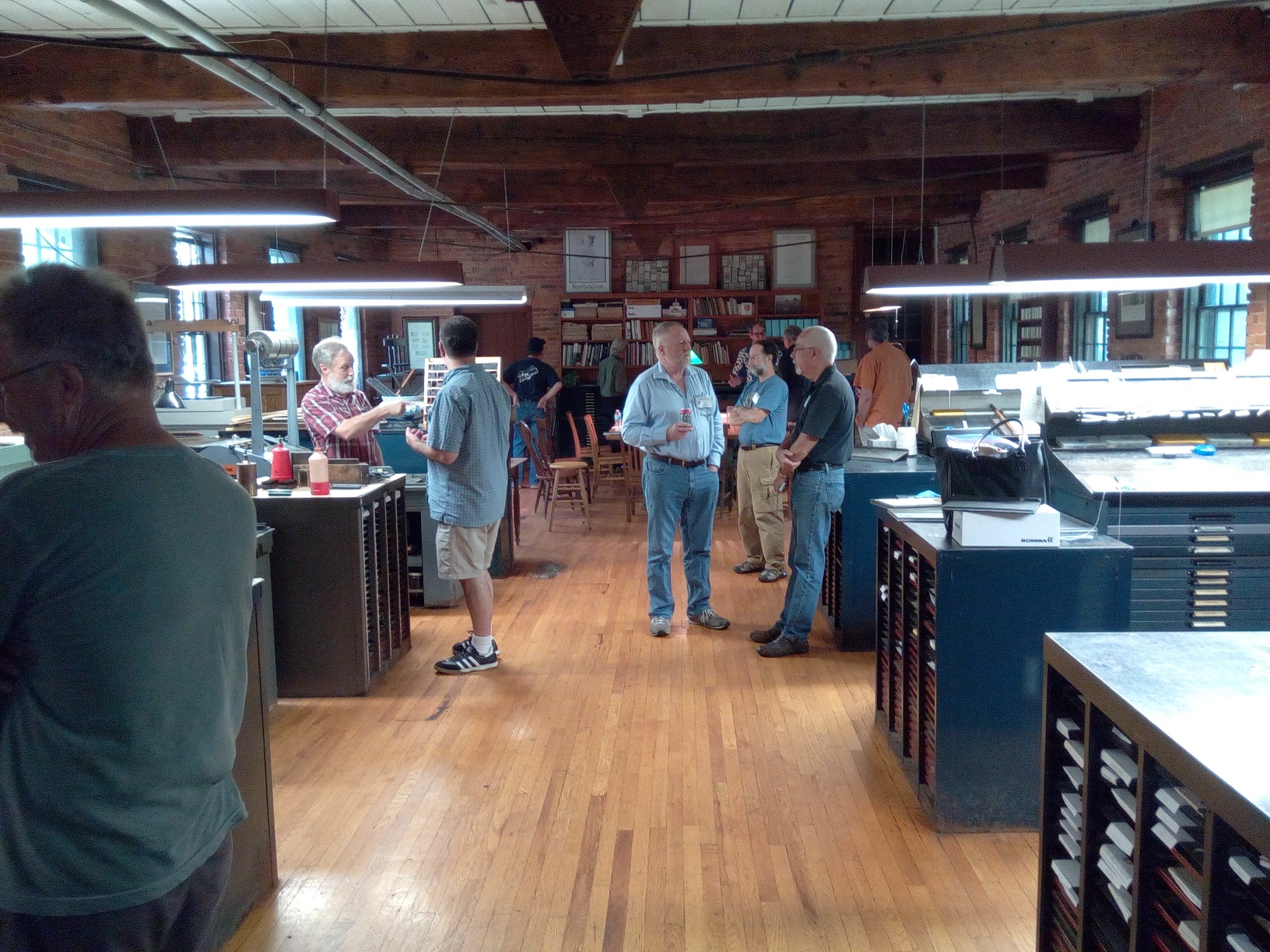 The other end of the room contains a proof press, Monotype Keyboard, and storage for galleys, keybars, keybanks, and type. 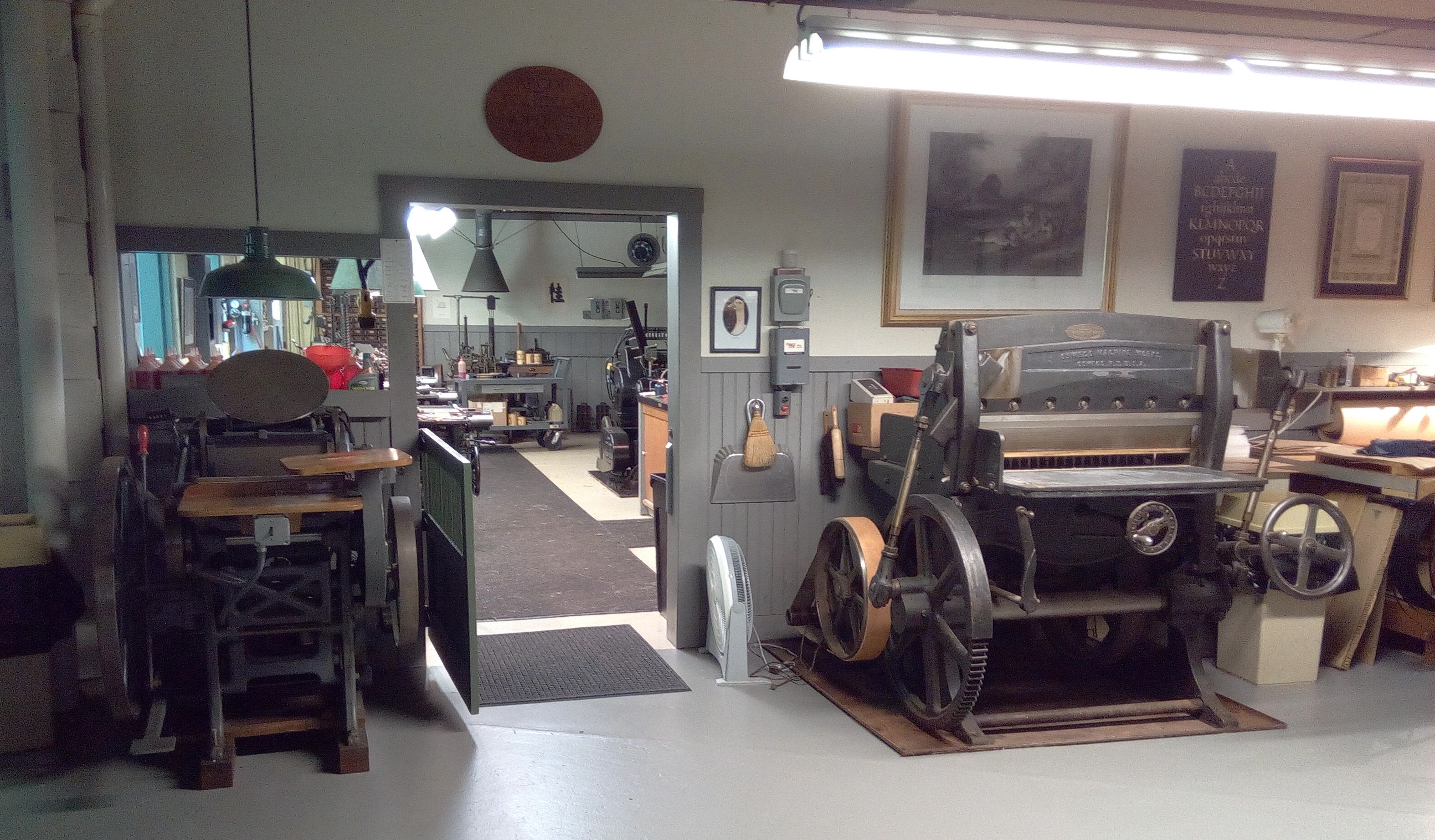 A wedge-shaped room connects the old building and newer addition, and holds a clamshell press, guillotine, and shipping facilities. The caster room is visible through the doorway. 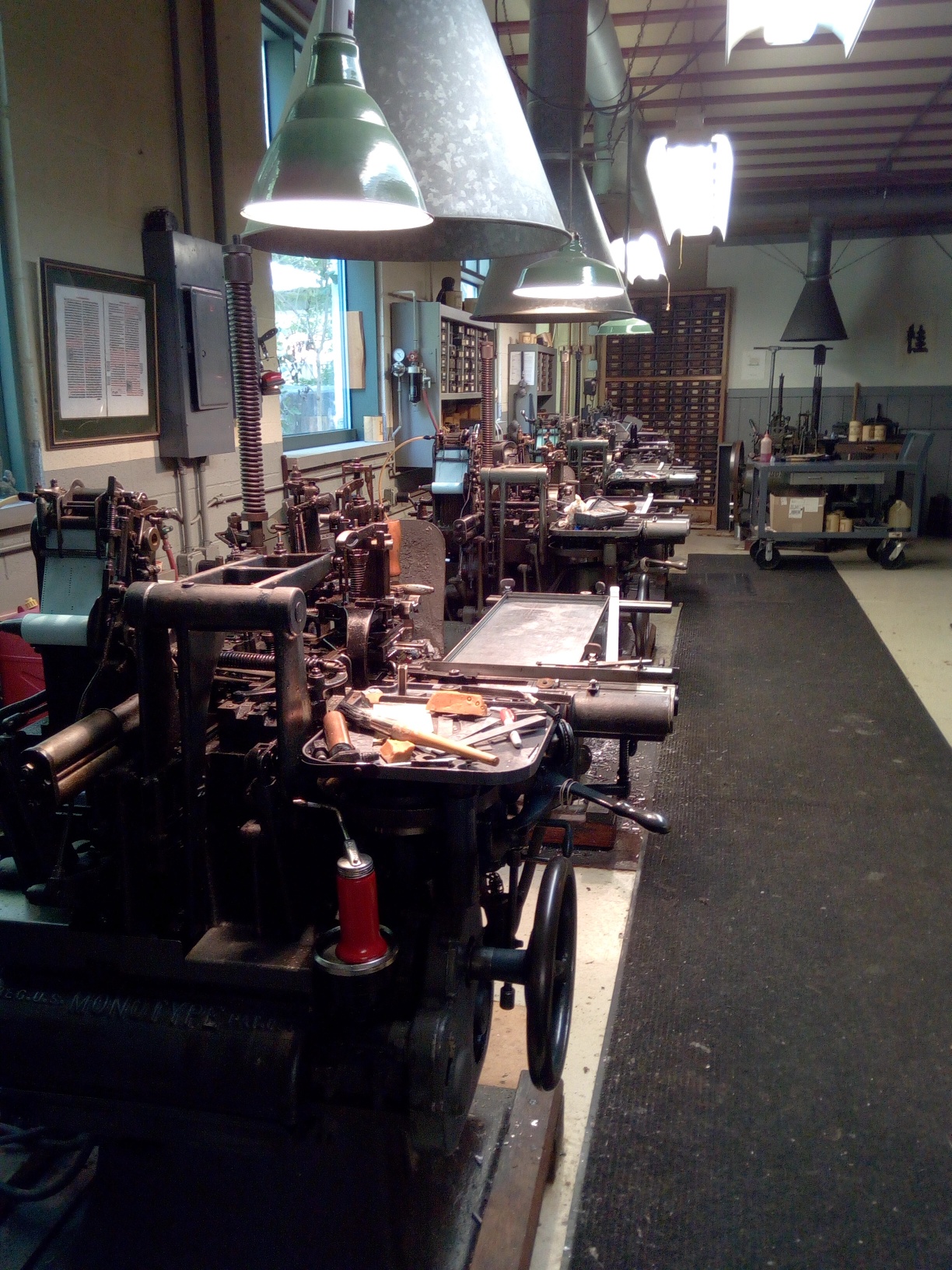 Along the left wall, three Comp Casters and a Super Caster. Behind the cart against the far wall might be a Material Maker but I’m not sure. 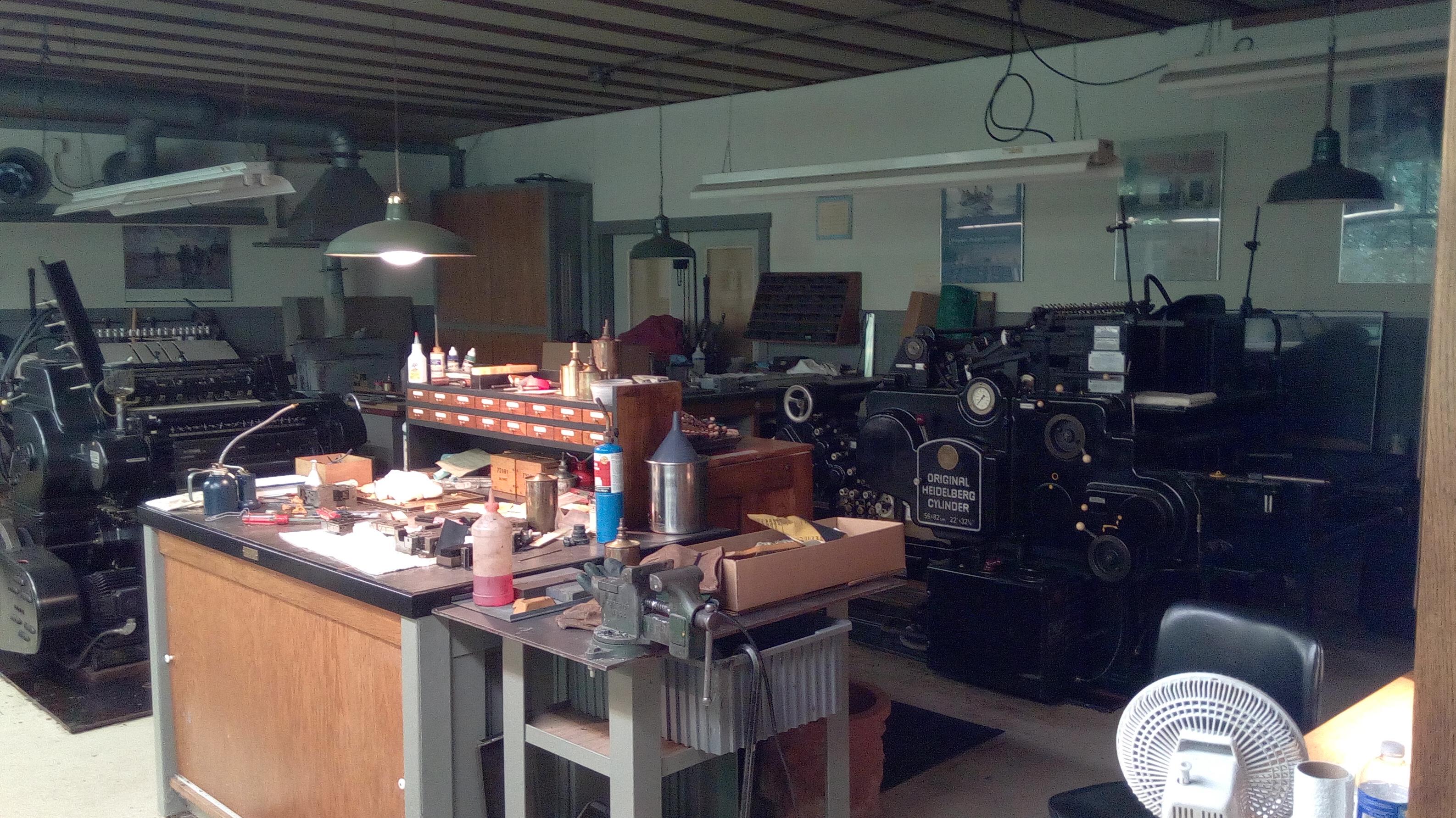 The remainder of the casting room dominated by two large presses, with what looks like a remelt furnace hiding towards the left in the back.

In addition there was one more large room, behind the two overhead doors visible in the outside photo, where things were set up for Friday’s lunch, and somewhere there is also a residence and a place for Mike to do his woodworking.

Then it was on with running the casters. We started with the Comp Caster. Two of Mike’s Comp Casters are Lanston (American-made) models, but they are fitted with English-style bridges, while the third is an English-made caster. Mike likes to stick to English fonts as well but uses Lanston moulds adapted to the 0.050″ drive depth of the English composition mats. 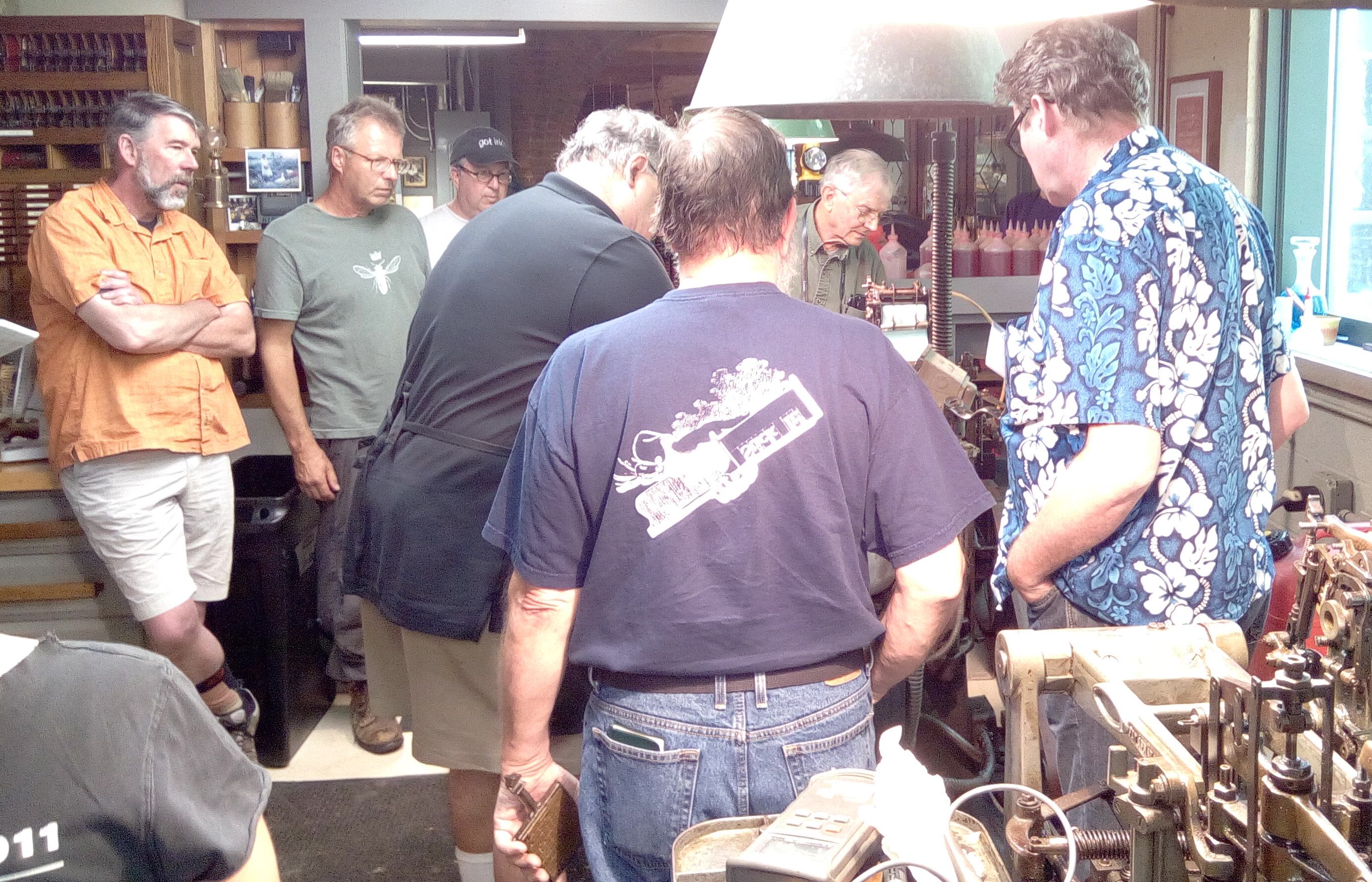 Workshop group clustered around the Comp Caster, working on casting from a short ribbon

The workshop was essentially the usual setup for running a comp caster, but in some cases, Mike has his own way of doing things. Although he sets the quad size using a micrometer, he does alignment mostly by eye and by feel (feeling for overhanging beards). While setting the quad size and alignment, rather than using the pump operating handle and the galley trip handle to manually control the pump and galley feed, he reaches to the pull-up rods on the two justification airpins to engage them in the centering pin arm. Engaging just the 0075 rod would stop the pump, the 0005 would start the pump, and both together would start a galley cycle (and stop the pump). This really only works if you don’t care where the justification wedges are positioned, but that’s fine for doing setup when you cast just a few types and want to eject them to measure them.

Later in the afternoon we moved on to the Super Caster. The basic work to be done was to change the machine over from its current setup so it could cast 72-point ornaments. This proved to be a bit of an adventure, partly because there were too many cooks. The new setup required changing the mould and setting a myriad of adjustments to suit the new casting size. This in turn requires removing the head, including uncoupling a cam arm from the rod that lifts and lowers the mat. The rod and arm are coupled by a pin which Mike, out of habit, replaced into the fork on the end of the rod so it would not be misplaced. During reassembly, none of the many cooks thought to reconnect this linkage; instead the pin and fork rested against the face of the cam arm.

A picture worth a thousand words. This is a schematic sketch looking from the right end of the caster showing the parts in their proper configuration and, in red, the rod in its jammed position with the pin pressing hard against the face of the cam arm.

When the caster was cycled, the cam arm moved inward (to the right in the sketch), pushing on the rod, but the rod ran out of motion and the cam arm jammed against the coupling pin, stopping the caster. The arc of motion of the end of the rod precluded raising it, and it was leaning against the base of the head so it couldn’t be lowered either to release the pressure. We loosened the push rod adjusting nuts and set it to its shortest length to try to loosen things, but it did not seem to make much difference. We suggested manually turning the machine back but the jam was hard, and Mike did not want to turn the handwheel too hard, being worried about damage caused by reverse operation. The head could not be loosened or removed because the push rod blocked access to one of the screws. One group set about to remove the head side cover (where the rod enters), while another group tried to hammer out the link pin using a drift. Removing the bridge side cover did not help (I don’t remember why), but eventually the pin was pounded out, being destroyed in the process.

Fortunately, Mike managed to scare up a spare pin and we got the caster going. After adjusting set size and alignment, we had it casting some nice thistle ornaments. The alignment wasn’t perfect but the machine was casting so the group started to disperse to look at the rest of Mike’s shop. A couple of us stayed at the caster and finished setting the alignment, and since the machine was all set up now I cast a dozen of so of the ornament. 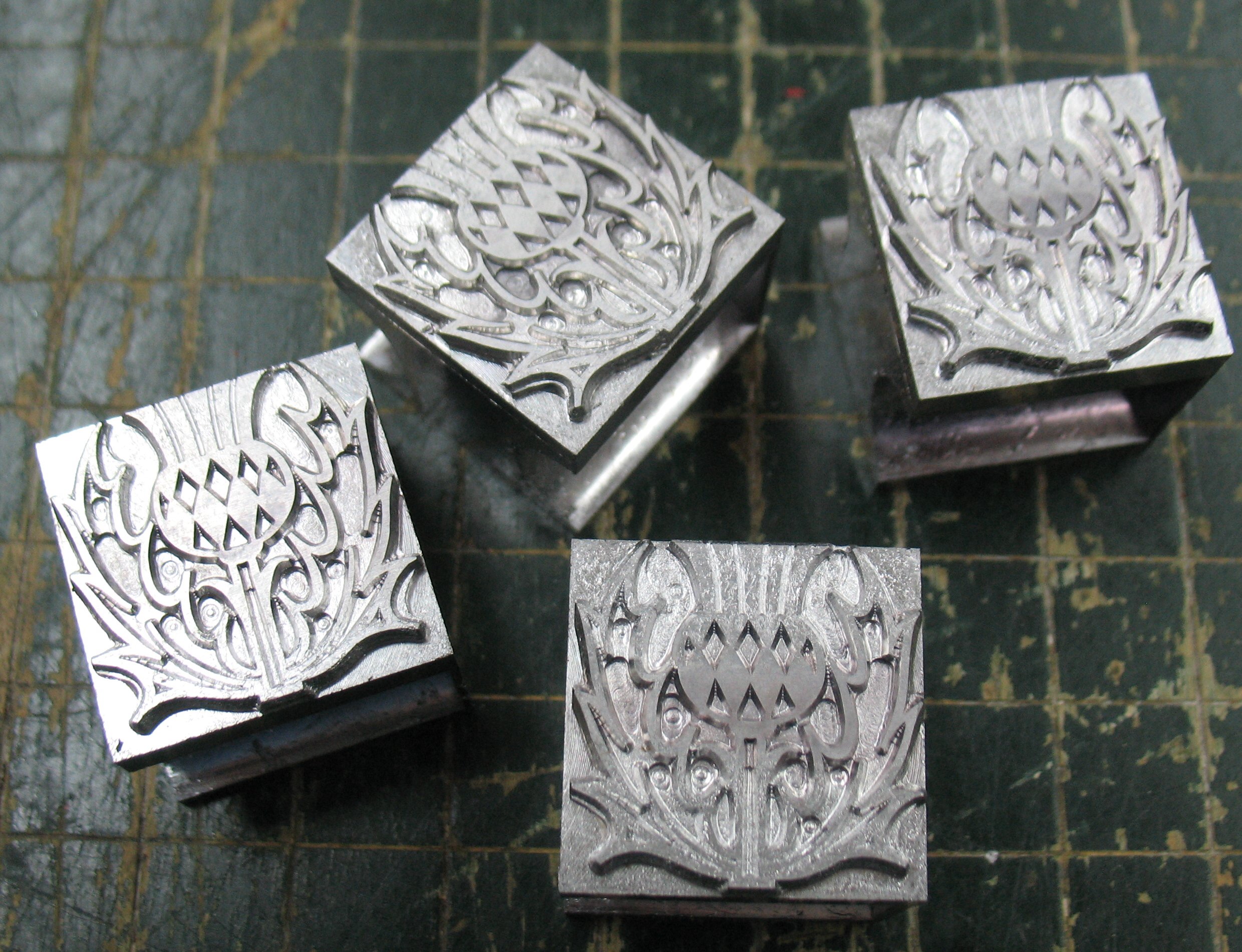 As the group broke up to head back to Auburn, a few took an ornament as keepsakes, and I passed out a few more when we got back to the hotel. I kept four for myself and put a couple in the auction the next day.

In retrospect, it would seem that storing the pin in the end of the cam arm rather than in the forked end of the rod would have avoided this problem. On the other hand it would have quickly resulted in a nasty squirt!