Some Pix from Gaspereau

Posted on 2015/11/15 by kpmartin Posted in Audrey, Kevin, Letterpress, Other people, Past Events — No Comments ↓

So here it is three weeks later and I’m finally posting some of my photos from my visit to the Gaspereau Press Wayzgoose.

With Hallowe’en coming up many of the yards in Kentville were decorated with Pumpkin People. These are the ones in the yard of the B&B where I stayed: 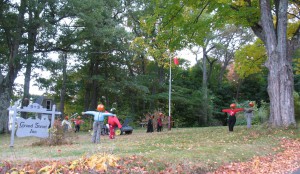 Having driven all that way (mostly in the rain) it would have been a shame not to do at least a bit of touristing. Friday was sunny but a bit cool and windy, so I spent the morning in Halifax, where I visited the Citadel, taking a guided tour included a loud and smoky firearms demonstration. For both this and the noon gun firing the guide pointed out that the best time to click the camera shutter was also as the best time to cover your ears, leaving one short two hands! I opted to take the photo and tolerate the noise; strangely I found the noon gun (a cannon with a 2-pound charge of black powder) to be less noisy than the rifle, probably because there was no stone wall to reflect the sound right back to me. 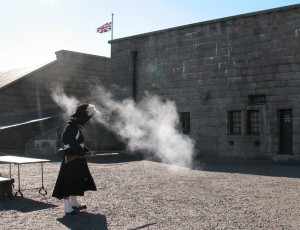 I hit the shutter a bit late so he had already lowered the rifle from his shoulder, but there was still plenty of smoke from the black powder.

It is a shame that all the high-rise development in downtown Halifax is slowly blocking off the amazing view of the harbour entrance that made the Citadel and its associated fortifications so impregnable.

After the Citadel I stopped for lunch at one of Audrey’s old hangouts from her days as a Lexx groupie attending their “uncon(vention)s.” 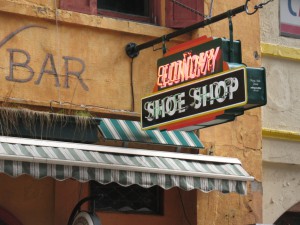 No shoes for sale, just good food and drink. Apparently the place got its name from the sign they found collecting dust in some storage room.

Friday afternoon was spent at Gaspereau helping a bit with the setup, poking around in the dark corners, and generally avoiding being in the way of the real work. I had a quick look at their mothballed Monotype caster (an American Composition Caster not fully equipped for display casting) and scored a partial can of genuine Monotype Mould oil. There were several partial cans there and I told Gary Dunfield that if he repackaged it into, say, 1L (about 1 quart) cans her could probably sell it on eBay or at an ATF conference.

Saturday was busy enough that I ended up missing the talks and spent the day in the letterpress shop. For a while I was helping George Walker diagnose a skipping gear on the form rollers of the Vandercook he was using. Ultimately the problem seemed to be caused by the very tacky ink he was using. I didn’t really get a chance for photos until it was cleanup time, so you don’t see the crowds in the photo, but at least you get to see some of the featured guests. 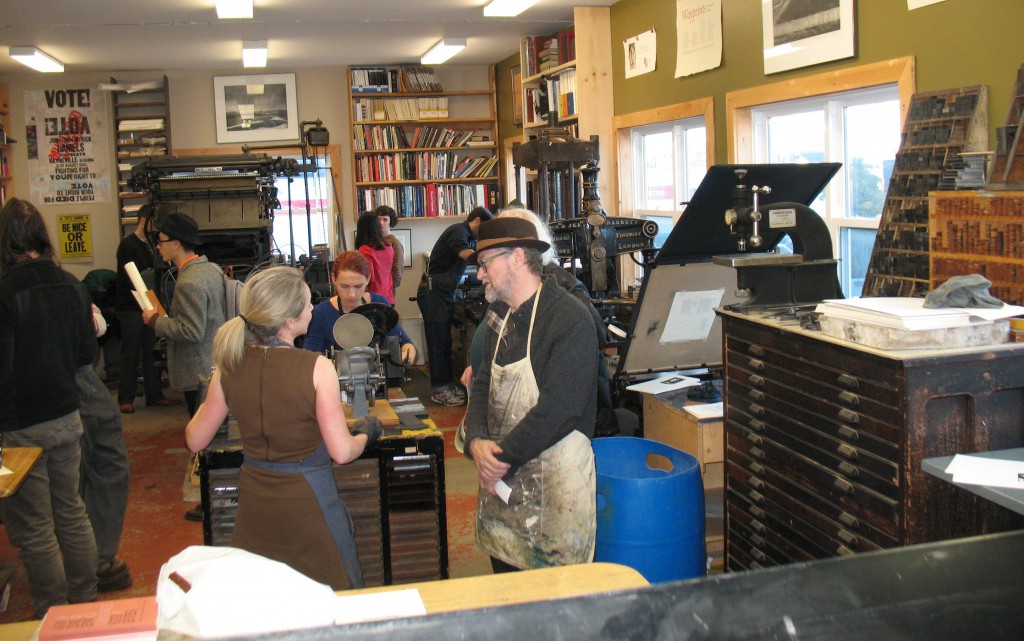 In the foreground (wearing the hat) we have George Walker speaking with Monica Kidd. Behind them all, at the far end of the room, Nick Kennedy and Christine from Trip/Print Press in Toronto are finishing their cleanup. I unfortunately can’t recall the names of anyone else in the photo; some of them are of course the last of the visitors, but there are at least two other featured guests at least partly visible.

There is also an excellent video taken by some unnamed member of Nova Scotia Printmakers which includes some of the cleanup and a wonderful recitation of Jabberwocky by George Walker.