Posted on 2013/10/04 by kpmartin Posted in Book Arts Guild of Richmond Hill, Equipment Acquisition, Repair, and Maintenance, Kevin, Other people — No Comments ↓

Stephen Sword, a friend from the Book Arts Guild of Richmond Hill, has a platen press at home fitted with a safety curtain. A metal frame rises above the edge of the platen as the press closes to push the operator’s hand away from the platen to avoid hand injuries. The frame is also fitted with a cloth curtain so the operator can’t put their hand through the frame when it is up (which would cause injury as the frame drops after impression).

The frame slides in two guides on either upper corner of the back of the platen, but being sliding parts they are subject to wear. On this particular press both guides have worn out and the right-hand guide has been replaced by a bent strap of sheet metal which looks rather makeshift and out of place on this old press. 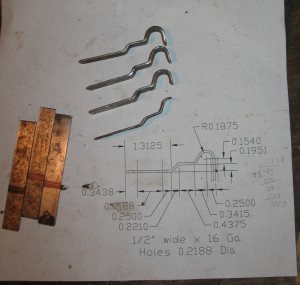 Three replacement guides with the original worn-out one below them, and three strips waiting to be bent, all sitting on the drawing.

He asked if I could make some replacement guides that looked more contemporary and less home-made. I’ve been sitting on the task for months but this week I finally started working on them. All I really had as a model was the broken piece of one of the original guides, so I had to guess somewhat at the dimensions. From the shape of the old part it looks to me like the same guide was to be used with frames made of either round rod or ¾×⅛″ flat stock.

I clamped a guide to my metal-cutting bandsaw so I could reliably cut strips ½″ wide from 16 gauge steel sheet. I smoothed off the edges with a file, and cut each strip in three lengthwise. Using a hammer, a vise, and a short piece of ⅜″ rod I formed the strips to match the actual-size printout of the drawing I had made. As it turned out I had not cut the first strip exactly in 3 so two of the guides are a bit short and the third had to be trimmed. The second strap was cut more evenly and I should be able to get 3 complete guides from it.

All that is left is to drill the mounting holes, and give the parts an old look by heating them with the torch to blacken them, and rubbing some oil into the surface to prevent rust. And then hope they fit properly.