Although most of my work on the pump on my Monotype caster seems to be on making a new extended-stroke piston rod, I am also working on cleaning and refurbishing the pump latch mechanism that Rich Hopkins sent me.

After disassembling and cleaning the parts I found that there were two broken-off screw stubs in one of the parts. The shape of the part and small size of the screws made removal of the broken stubs almost impossible. Even trying to drill them out failed because the drill bit would wander off the broken screw into the comparatively soft cast iron part it was embedded in.

I eventually found that I could use a 4″ long endmill to reach the screws and mill them out. Unlike a drill, an endmill has a flat face and does not tend to drift so much from hardness variations. Unfortunately the mill was also 3/8″ diameter and so left large holes to be filled. 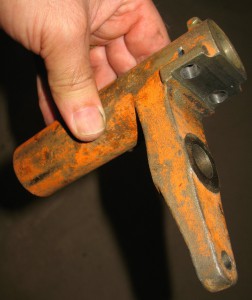 This is the latch part with the broken screws milled out. Note the arm close to the holes which requires long-reach tools. 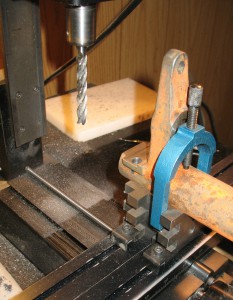 This was the milling setup for removing the broken screws. Note the extra-long endmill which was able to reach the required location.

I made some steel plugs the required diameter to fill the holes and brazed them in place, milled off the excess metal and finally finished the surface with a file. 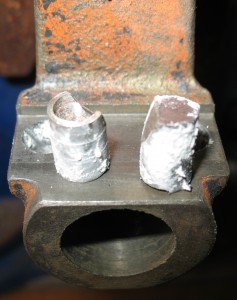 These are the plugs, coated with flux and ready to install. A corner was taken off each plug so they would not interfere with the large hole visible at the bottom of the photo. 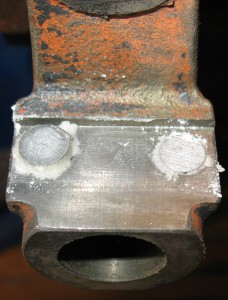 The plugs have been placed in their holes and are ready for brazing. 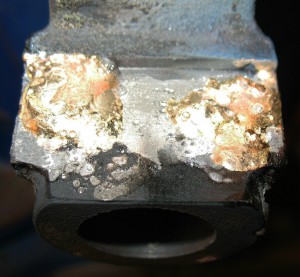 The plugs have been brazed in place. The photo is a bit overexposed due to glare so the brazing looks whiter than it really is.

The rough removal of excess brazing and plugs was done with the same mill setup as for milling out the broken screws. The final cleanup was done with the mill head turned horizontal so it could reach right into the ledge. 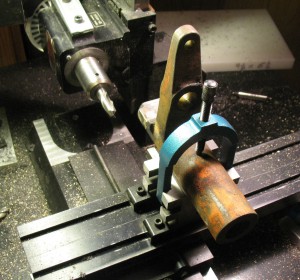 This is the mill setup for final cleanup of the brazing and plugs. 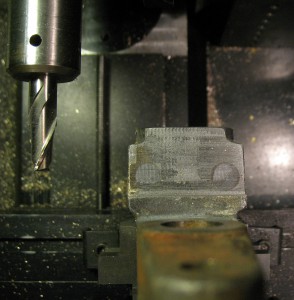 The face has been cleaned up with the mill and some final finishing with a flat file.

The next steps will be to mark the proper hole locations, drill and tap them. I will have to make an extension for the drill bit and another for the tap wrench to get this done.