My rhubarb is once again growing amazingly large. This plant has a long history. I first met it in the back yard of the house I grew up in. When it was there it benefited from annual feeding in the form of manure from an abandoned stable on our cottage property. When I eventually bought my own house in Waterloo, I dug up a football-sized hunk of the root and planted at my new house, where it continued to thrive. Three years ago, when we moved to New Dundee, I dug up a bunch of pieces of the root and replanted them in New Dundee, and as you can see in the photo they continue to thrive despite having grown in three rather different soil types. 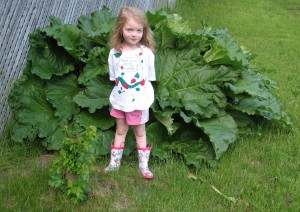 Watch out, Lily! It’s going to eat you!

In front of Lily in the photo is my mulberry plant. The main trunk is now about 1′ tall since I cut half of it off this spring. By then the buds were already opening, and this plant has seemed so vigourous that I just planted the cut-off part in the ground and plan to keep it well-watered and pruned during the summer. This was done a couple of weeks ago and the new foliage, although a bit smaller than on the parent plant, is still growing. Time will tell whether it will survive but I think if it lasts the year it should be fine. 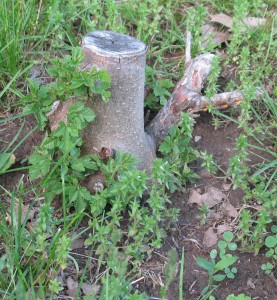 This is the piece cut off the trunk of my original plant, rather crudely planted. We’ve had plenty of rain lately and so far, so good.