Proof from the March 2nd Casting

My post on this weekend’s casting adventures did not include a proof of the imperfect but useable forme cast in the early evening, so here it is: 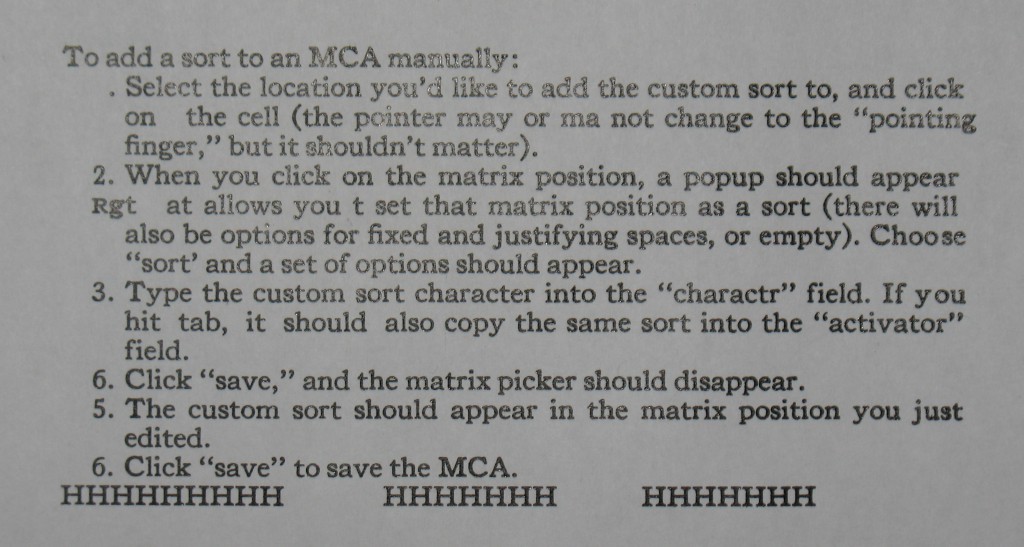 This was done with rubber based ink, and the gloss of the ink caught the camera flash making the jet black printing appear gray and porous. There are ten corrections to make, and I cast a few sorts today for this purpose. The corrections are in now, but I have not filled the lines yet to make everything lock up tight.

Having looked at this proof I also see something wonky about the spacing of the second line in item 3: The first four spaces are clearly wider than the remaining ones, yet the line length seems to have come out correctly. The mixed space widths could perhaps be due to the S punch being not recognized in part of the line, making the spaces have their natural width, but that doesn’t explain why the line length is correct. This also did not happen in the Sunday afternoon casting, so I’ll be taking a closer look at the ribbon to try to find an explanation.

A look at the spreadsheet I used to verify the justification codes reveals that this line in fact contains only 4 S punches, and has a wide justification adjustment of 8/3, meaning about 2½ points of justification are being added to just four of the spaces. The previous casting would have been before I corrected the justification. If all 11 spaces had S punches, the justification code would be 5/3, adding only about one point to all of the spaces. It will also be interesting to see what the original justification codes were on that line. I believe that the keyboard has a lever to control whether the space bars produce adjustable or fixed spaces. It would appear that partway through keying that line the lever was moved to the fixed-space position, and reset at the end of the line when I noticed there were only 4 justifying spaces. So I may fire up the caster again to cast the correct width of spaces for this line to produce even spacing.

Oh, yes… that row of cap H’s at the bottom is for checking the matrix alignment and will of course be removed from the final proof!