New (to me) Monotype documents

Late last week I picked up a pile of Monotype manuals and other publications from Don Black. These were generally duplicates to ones he already has.

Many of these documents are ones I already have as well, although some are in better condition that my current copy. A stack of Monotype Recorder and Monotype Technical Bulletins fill many of the gaps in my own collection. A couple of the new documents were real gems too. 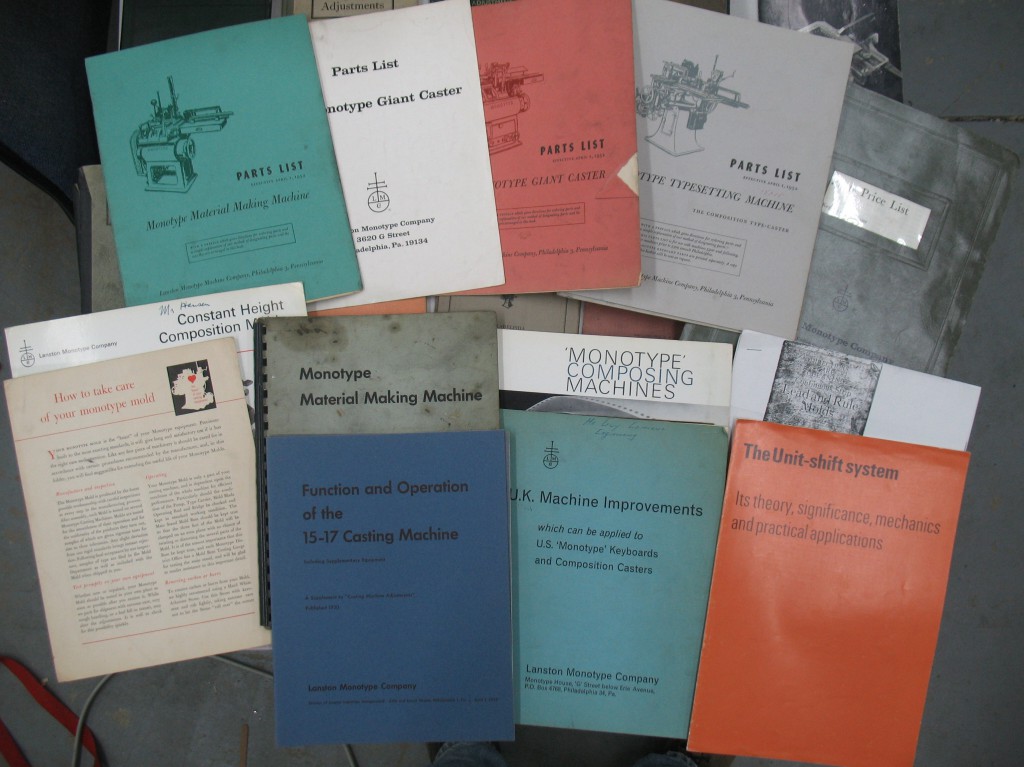 Stapled books in 8½×11 format. The dark blue one at bottom center was particularly interesting to me. 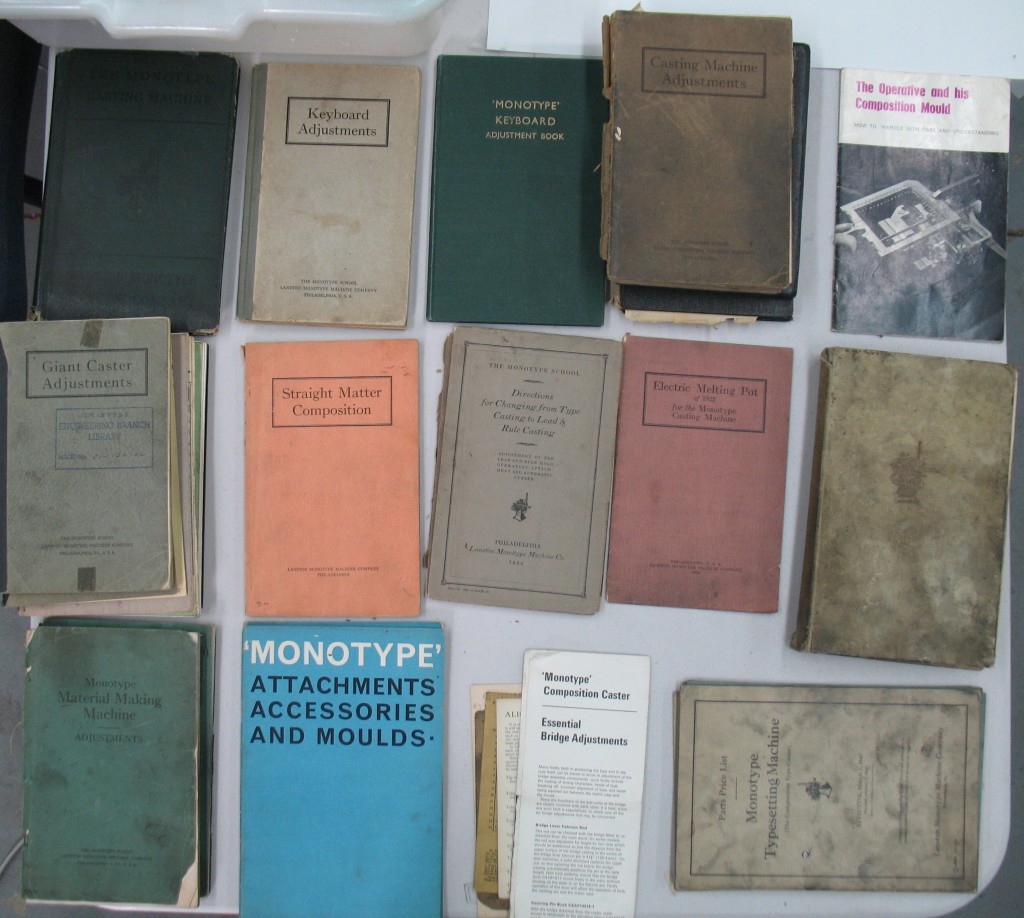 Books in 5×7 format or thereabouts. 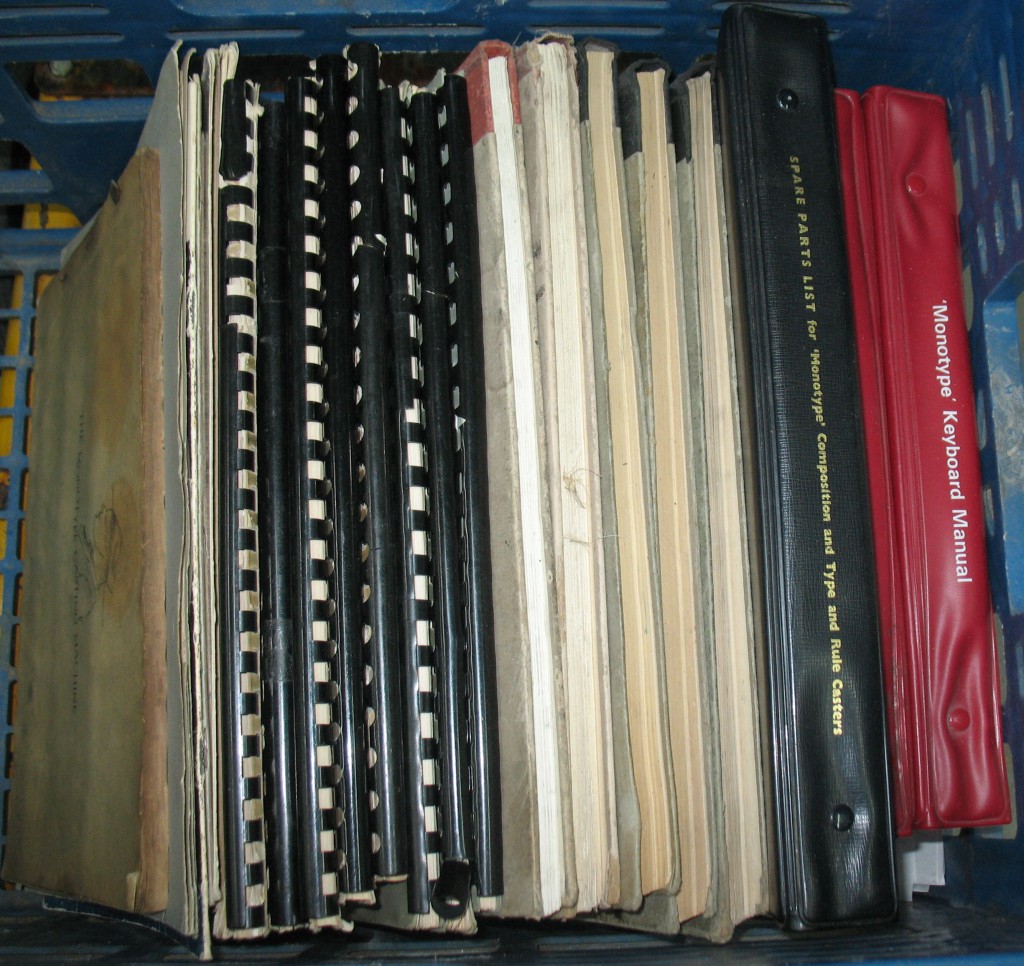 Multiple copies of various parts books such as Lanston’s 1955 Plate Book and other manuals. 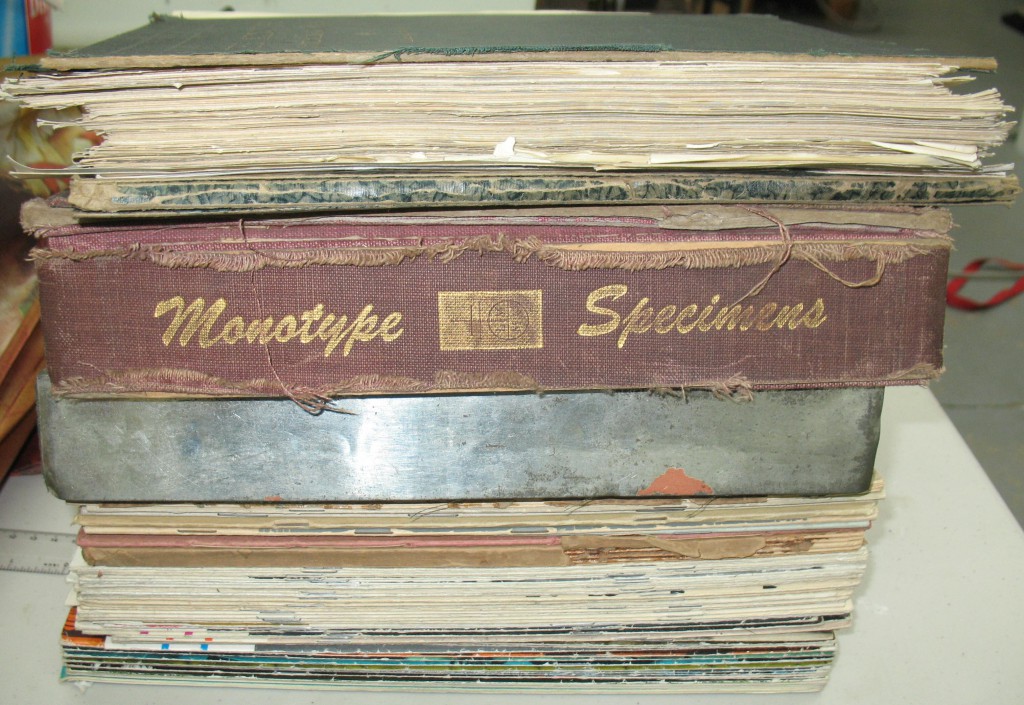 Two or three specimen books, plus a stack of periodicals. The metal-backed binding holds an extensive specimen set of specials such as braces, figures, symbols, and borders.

The dark blue book in the first photo, entitled Function and Operation of the 15-17 Casting Machine is also subtitled A Supplement to “Casting Machine Adjustments” Published 1930 and covers topics other than just the 15×17 matcase.

It also describes the ribbon-driven low-quad control used on American casters. This is recognized by the presence of a pneumatic control box on the caster table, near the middle of the rear edge next to the specialized lower jaw tongs bellcrank, and is illustrated on pages 70 and 71 of the 1955 Plate Book. In this description it is called the Patton Spacing attachment, named after its developer Wade Hampton Patton, who began working for Lanston in 1946. There is a good description of its operation, where it uses the J+H combination punch to signal the mould and force a low quad. There is no direct equivalent for English casters, but it appears to me that it can be accomplished using the Duplex Mould/Dual Type valving with a standard mould installed. In this case the combination punch N+0.0075 (or perhaps its absence) would signal the mould for a low quad.

The other gem in this book is the description of what they call the Rockford Clutch drive system, named after the company which produced the actual clutch part. This is the drive system on my caster, which up until now I have seen nowhere else! The standard drive engagement system shifts a flat drive belt from a loose pulley to one that is fast on the caster’s drive shaft. The Rockford mechanism instead uses a friction clutch activated by axial pressure on a countershaft.

Other books that will be useful to me include the ones concerning lead and rule casting. These include Directions for Changing from Type Casting to Lead & Rule Casting and a very rough but still legible detailed description of the actual mould and its parts and maintenance.

‘Monotype’ Attachments, Accessories, and Moulds’ is useful in giving some correspondence between serial numbers and features for the English casters.

It will take a while, but once I have these integrated into my library I should have a list of spares if anyone else is interested in any of them.

3 comments on “New (to me) Monotype documents”