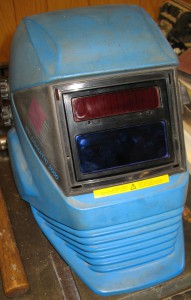 My Nederman Weldomatic 2000 welding helmet, with the front bezel and protective cover removed.

Many years ago I bought an auto-darkening welding helmet. This was back when they cost several hundred dollars and were only sold by serious welding shops. They hadn’t hit the hobby market yet. Nowadays similar helmets (but with much larger viewing area) can be got for under $100.

After four years in mothballs (since we moved to New Dundee) I got my MIG welder working again, at least for light welding work, but I found that this helmet wasn’t working. The lens would darken a bit but nowhere near dark enough for arc welding.

This helmet contains internal batteries to power it, and also a solar cell to reduce the battery load. I would expect that when welding, the arc flash on the solar cell provides more than enough power to run the circuitry. The batteries serve to provide power at other times.

The helmet was well beyond warranty and I knew what a replacement would cost, so I decided to try to fix this one. Some Google searching revealed that the likely culprit was dead internal batteries. 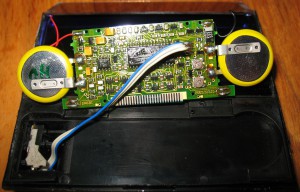 Inside the cartridge. The circuit board has been flipped onto the lens, and the solar cell (connected by the red and black wires) moved back. The ribbon cable runs to the shade control.

I stripped down the helmet to remove the actual lens cartridge, and split open the plastic case for the cartridge, which appeared to be held closed by a combination of catches around the edge and two pegs along the centre divider. Within the case were two resilient spacers with cavities to hold the lens, solar cell, and circuit board.

For power, two BR-2330/VCN lithium coin cells were soldered in, one on each end of the circuit board. The voltage they were producing was around 1V, well below both their nominal 3V output and their rated end-of-life voltage. The soldering job did not appear to be factory-original, which reminded that a few years after buying this helmet I had sent it in for repair of essentially the same problem. It would seem that the factory repair entailed replacing the batteries!

I unsoldered the two cells, and formed the leads on the replacements to the same shape before soldering them in. A quick check by holding the unit up to a fluorescent lamp seemed to indicate that it was darkening much more than previously.

I reassembled the cartridge, using a bit of superglue to hold it together since some of the catches did not survive the disassembly. I reassembled the helmet and tried it again against a fluorescent lamp. This was when I noticed that the darkening of the lens was patchy. Some areas seemed to darken fine and others stayed much lighter. While I was doing this test I had not installed the protective clear covers yet and at some point I pressed on the lens and noticed that pressure caused the darkened areas to move about in the field of view.

It would appear that the lens has an internal layer, probably containing liquid crystal, which must be of a very specific thickness to work properly. My thoughts at this point are that during disassembly, repair, and reassembly, I applied some pressure to the lens causing permanent distortion of the internal layer, so this unit is now toast.

One misunderstanding commonly encountered with these “solar-powered” helmets is that the solar cell can recharge the internal batteries. However, these lithium cells are not rechargeable. At best one could hope that with daily usage the solar cells could top up the lithium cell charge consumed overnight, when the helmet is stored in darkness. But a helmet used only infrequently would not benefit from such frequent charging and the lithium cells would die from the small idle current consumed by the circuit (there is no on/off switch).

So now I’m shopping for a new helmet. I’m hoping I can find one where the cells can actually be replaced when they die.