My tomato plants are dying (again)

I’m finding that the tomato plants in my vegetable garden, which have been growing so well up until now, are doing the same thing they’ve done for the past three or four years: They suddenly wilt, sicken, and die. What few tomatoes are on them right now may grow a bit and eventually ripen but I don’t get the great crop that early season growth had promised.

The wilt hits the plants one at a time, somewhat  randomly through the patch, and generally starts at the top of the plant. The plant will be fine one day, then start showing droopiness the next day. The wilt gradually works down the stem and eventually up the other branches.

There is plenty of moisture in the soil so I’m at a loss as to what to do about this. This year I moved the tomatoes to a completely different part of the garden so it is not a soil-borne disease being carried from year to year, nor is it some effect from the (now distant) black walnut tree in the schoolyard. 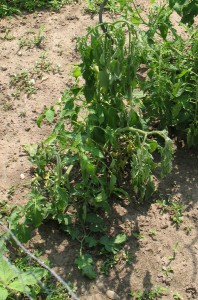 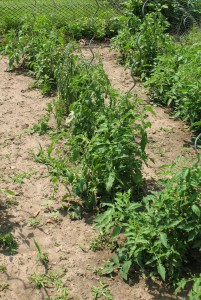 A row of plants, most healthy, but third from the rear is showing a lot of wilt.