Posted on 2013/05/21 by kpmartin Posted in Equipment Acquisition, Repair, and Maintenance, For Sale, Type Casting — No Comments ↓

As part of fitting the pump latch mechanism onto my Monotype caster, there are a couple of missing parts that I might have to make. Making them should be easy since they are geometrically very simple, but I would have to do some estimating on some of the dimensions. Before going down that road I thought I should check my stock of parts to see if some previously unrecognized part turned out to be one of the ones I need.

I keep my parts stock in wooden crates I made special for the purpose from 7/16″ chipboard, and I keep them stacked on a pallet. The bottom of each crate is set into a dado in the sides so heavy loads won’t cave them in. There are two crate sizes, one exactly twice the height of the other. 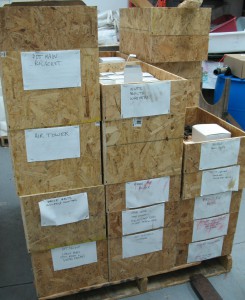 The parts are roughly organized based on the functional group of the machine, and also on size so I don’t have a deep crate containing a big heavy casting along with a few small parts rattling around in the bottom. Sufficiently small parts are put in cardboard boxes and labelled on the box. Here are some sample bin contents:

This is the bin labelled “Pump & support & lift mechanism” and most of the parts appear to be the pump support mechanism, although you can also see some pump parts (a hat valve and an American-style piston) 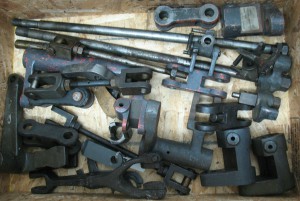 This is the “pump operating mechanism” bin. This contains several lower crossblocks, some parts for the levers that actually move the pump piston, and linkage parts all the way back to the catch that enables or disables pump operation. There are also a couple of release mechanisms for the pump latch. 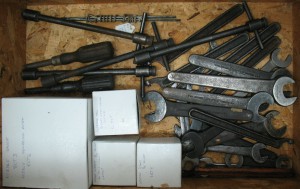 This is the “Tools” bin which contains an assortment of Monotype (and other brand) tools for working on the caster. Some of the smaller tools in in the boxes labelled with their part numbers.

Unfortunately I did not find either of the parts I was looking for, but I did stumble across some parts in the “unknown” bin that turned out to be the eye at the bottom of the piston spring rod (a20H2).

That’s just a sampling of the bin contents, so if you’re looking for a part check with me. I might just have one (possibly brand new) in one of these bins. I even have some keyboard and Giant Caster parts even though I own neither.