We bought this handsheet former several years ago as part of a lot of commercial papermaking laboratory equipment and it is time we tried to sell it. This unit is for making standardized test sheets following TAPPI (The American Pulp and Paper Institute) procedure T205 “Forming handsheets for physical tests of pulp.” 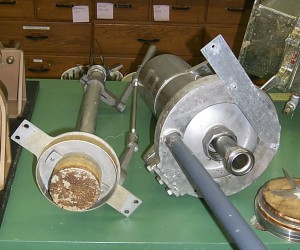 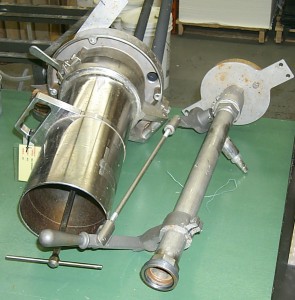 Unfortunately I don’t have a photo of it set up for use but a drawing can be seen as Figure 2 in the above reference. The near end of the pipe/valve seen on the right side of the second photo attaches to the drain of the cylindrical tank, which can be seen on the right side of the first photo, and the whole assembly stands upright with the base of the cylinder on a stand (not included) over a drain sump. The cylinder can be unlatched at its base and tipped open to reveal a removable round screen, on which the sheet is formed. The sheet formed is 158.8mm diameter. A trough around the base of the cylinder catches spilled water and sends it down the gray plastic drain pipe visible in the first photo.

To use it, the unit is filled with water to a certain level in the cylinder, also filling the long drain pipe. A specific amount of pulp is added to the cylinder and stirred a specific number of times using the included dasher (which is then removed). Pushing down on the lever opens a valve at the foot of the tall drain pipe, and the water spills from the bottom of the pipe; the height of the column of water generates a considerable suction, drawing the pulp against the screen to form a sheet. The idea is the emulate the suction applied to the mould screen (“wire”) in papermaking machines.

The cylinder is again unclamped and tipped open, the screen is removed and the sheet is couched off onto standardized absorbent blotters and placed in  a standardized press to press out the water, thence to a (what else?) standardized drying stack. The finished sheet is cut up into pieces destined for a suite of other standardized tests. 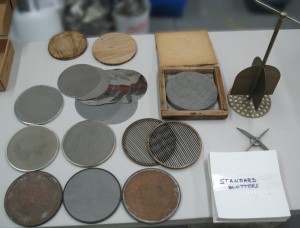 There are a few accessories included:

We are asking $1000 for the sheet former and accessories, HST and shipping extra.