One thing I have wanted to try for a while was the duplication of a Lanston Monotype display matrix. It it probably not worth the trouble to copy an entire font of mats, but it would be useful for replacing the odd missing mat, assuming you can borrow the mat to be copied.

The idea is to use some sort of mould-making compound to take a cast of the original mat, then to electroform copper onto that cast.

The first step it to make this cast. 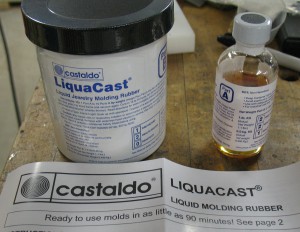 I purchased this molding rubber from a jeweler’s supply store (Lacy & Co.) in Toronto a couple of years ago for this purpose, then the project was shelved for lack of time. On review, the instructions turn out to be almost paranoid about avoiding the introduction of any moisture into the liquid resin, including directions not to use wooden stirring tools because of the moisture they could contain. They also seemed to imply that I had stored the compound beyond its shelf life (again, due to moisture leaking into the containers). Despite this I found that the product was still fine for use and produced good casts. It probably helped that this was stored in my basement, which has a very stable temperature and is reasonably dry. 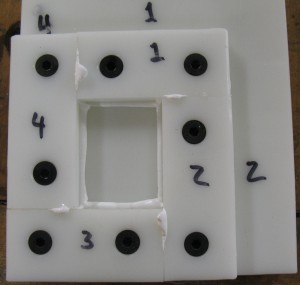 As a container for making the cast, I built a small form out of rigid HDPE (polyethylene). The base is ¾″ thick (scraps from making our moulds and deckles) and the sides are strips of ⅜″ thick plastic (scraps from making the ribs for our ribbed moulds). The cavity is 1¼×1⅝″ which will give a ¼″ margin all around the matrix.

The form is held together with countersunk #10-32 machine screws leaving a flat top surface. I assembled the pieces with silicone cement in all the joints so there would be no leakage. I had never used this molding compound before and was unsure as to how runny it would be. The photo was taken before the excess silicone cement was cleaned off.

A smear of the silicone cement was also used to hold the mat in position, face-up, in the center of the cavity.

The instructions insist on measuring out the two components by weight, so using the measurements of the cavity and the information on the sheet I calculated that I should start with about 27g of part B (the large jar) and one tenth of that amount of part A. Part B had settled a bit and needed stirring. I measured out the correct amounts, mixed them, and filled the cavity. The mixed resin started out about as thick as pancake syrup but gradually thickened, and was pink like calamine lotion. 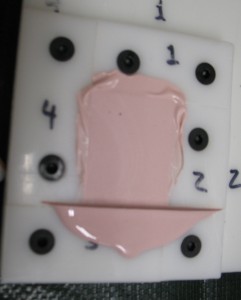 I used another piece of ¾″ HDPE to slide onto the top of the cavity and a weight to hold it down so my finished cast would have a flat back.

I allowed the resin to set for 24 hours (it can be set in as little as 90 minutes by warming it up).

When I removed the top plate this is what I found. A thin layer of resin had worked its way between the top plate and the sides leaving a flap that could easily be torn off. The excess resin at the bottom had to be cut off. I had positioned the top plate not completely cover the cavity so the excess could run back in if there was any shrinkage. After this first test I don’t think this precaution is required as there is no evidence of shrinkage.

After removing the cavity sides, the casting peeled off fairly easily and came cleanly off the mat (pulling a lot of dirt off it in the process). 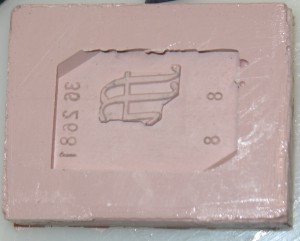 This is the casting with most of the edges cleaned up. A bit of resin had leaked under the mat leaving that thin flap visible along the top edge.

The mould was rubbery and fairly soft, softer that a pencil eraser. By having a flat back, though, I could arrange that the mould was not distorted during the electroforming step.

The mould unfortunately contained a flaw caused by an air bubble. The two bubble cavities on the edge of the mat are a minor nuisance as the metal formed there could be filed off the mat. The real problem was the bubble at the lower end of the first ‘f’: 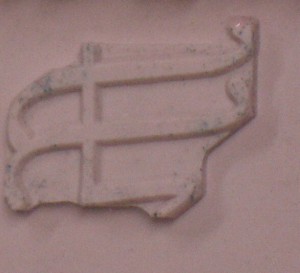 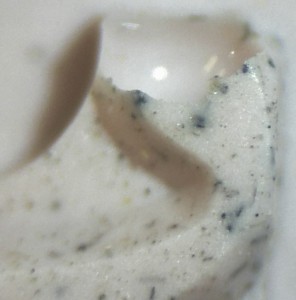 This flaw would be pretty much impossible to repair. In my next post I will show the results of a second attempt at making the mould.