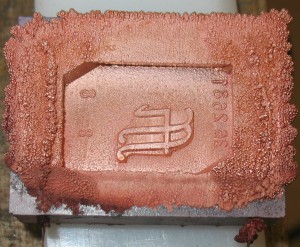 My last post on this subject showed the initial copper plating almost covering the graphite. An hour or two of further plating produced a nice bright copper layer over the entire surface of the rubber mould.

The plating was fairly smooth and seemed to be filling corners well. At that point I wanted to stop, or at least slow down, plating beyond the edges of the mat itself. 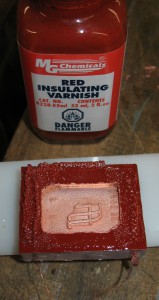 I coated the outside area with insulating varnish. This is an acetone-based varnish normally used when winding transformer and electromagnet coils to keep the wires from shifting and also for additional insulation.

Unfortunately this varnish turned out to have small pores in it. These were perhaps caused by residual water or electrolyte crystals on the copper when the varnish was applied.

In any case, further plating resulted in the growth of copper nodules (sometimes called “flowers”). I occasionally took the mould out of the plating bath and broke off the nodules, and even at one point tried another coat of varnish.

The actual mat seemed to be growing a layer of copper, but the inside corners were not plating well and were getting close to being closed in by the nodules growing along the upper edge of the mould cavity. This would leave water-filled cavities trapped within the copper. Because of this I stopped any further plating until I could get better control of the process. 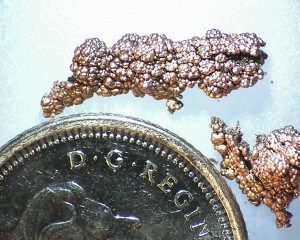 Although they are a nuisance when plating, the flowers have a very fine nodular structure.These are some of the initial flowers shown alongside a dime. 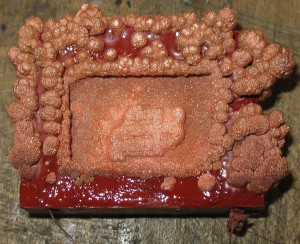 This is how the plating looks now. The excessive growth along the edges of the cavity, as evidenced by the dark shadow along its top edge, threatens to trap water in cavities in the copper.

I have done some research on plating, and although it seems to be a somewhat black art, where every problem seems to be potentially cured by every fix, I have found four things to correct before trying to plate again:

So my plans generally are to keep the bath covered most of the time to reduce evaporation, get some appropriately pure copper for the anode, put the anode in a cloth bag to confine the copper oxide that flakes off, and try using a small pump to spray the electrolyte directly against the face of the mat.

But for now I’m putting all that away so I can use the workshop to make some cases to contain all my new composition matcases.