That’s ‘pyc’ sounding like an ice ‘pick,’ ‘n’ as you would expect, and the rest rhymes with ‘barometer’ with the ‘nom’ being the stressed syllable.

This is a fancy name for a container which can be filled to a very reproducible volume of liquid (there are also pycnometers for powder). Even though the actual volume is only roughly known, and varies from one pycnometer to another apparently identical one, the fixed volume is still sufficient to measure the specific gravity of liquids. 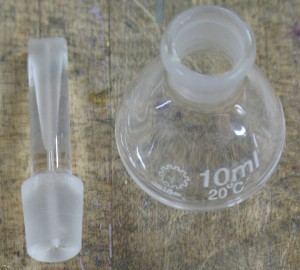 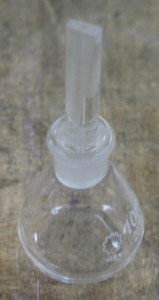 This used one I bought holds about 10ml (⅓ of a fluid ounce). The stopper has a fine hole drilled through it up to the top. You fill the bottle to the brim, and insert the stopper. As the ground glass joint of the stopper seats, the last bit of excess liquid is forced out through the hole, leaving you with exactly the same volume of liquid in the bottle each time. Of course you have to clean and dry the outside of the bottle before weighing it.

Essentially, you weigh the empty pycnometer, weigh it filled with a reference liquid (almost always pure water), and weight it a third time filled with the liquid whose relative density you want to determine. A fairly simple calculation, which includes the current atmospheric pressure since the buoyancy from the air affects the apparent weight, yields the relative density of the tested liquid as compared to the reference liquid. When the reference liquid is pure water, this relative density is called the specific gravity. Because the result is actually the ratio of two densities, the facts that the volume of the pycnometer is not known accurately, and that the local gravitational force might not be known exactly (it varies from location to location) don’t affect the result. Details on the calculations can be found in this Wikipedia article.

One liquid I want to test with this is the glycerin we sell. Glycerin almost invariably contains at least some water since it is so hygroscopic, but the stuff we sell is not labelled as to water content. It would be useful to know this information, not only to keep our customers informed, but also since this can affect the recipe used for making composition (a rubbery material made of gelatin+glycerin+sugar+water) rollers for printing presses. Given the specific gravity of a mixture of glycerin and water, the fraction of water can be determined by consulting the appropriate reference table.

I’m just fixing up the precision weigh scale I have (which weighs to the tenth of a milligram), and once that it ready I can test our glycerin.