A Pump Stroke Counter for the Monotype Caster

I recently installed a pump stroke counter on my Monotype Composition caster, which will prove very useful when casting spacing and fonts of display type (fonts of composition type can be produced using the paper ribbon or computer interface). 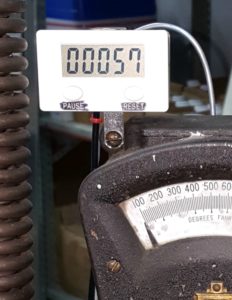 The counter is an inexpensive import which was given to me by Stephen Quick at Weathervane Press in Orleans, Ontario.

I used an indelible felt-tip marker to improve the readability of the markings on the case.

I bent the included mounting bracket so I could attach it to the cover screw of the Partlow temperature controller. This gave it a convenient spot where it was visible while still being out of the way and away from the heat of the pot.

The counter draws very little current so the single AA battery should last a long time, but there is no power switch, so if you notice the display has gone blank, you should remove the dead battery before it leaks. The battery in it when I received it was dead and had, in fact, leaked a bit. 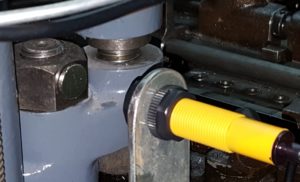 Although you can use any sort of switch to run the counter, this one came with a magnetic pickup. I drilled a strip of steel to hold it, and this strip was screwed to existing tapped holes on the rear of the caster near the pump body spring rod. I added some spacers between the strip and the caster frame to raise the strip to clear an obstacle.

To operate the switch, I just put a disc-shaped neodymium magnet on the side of the nut that holds the pump body spring rod crosshead to the pump body spring rod. It was a bit of a lucky fluke that this nut faced the right way, but on adjusting the spacing between the magnet and sensor, it looks like there is plenty of magnetic field strength and it would have worked regardless of the position of the nut.

By adjusting the distance between the sensor and the magnet I got the counter to work reliably regardless of the number of spacer plates used at the bottom of the pump body spring rod to adjust the pump stroke timing. 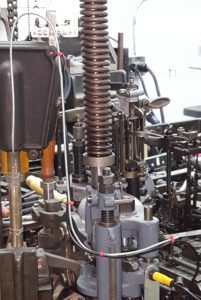 This left me with the counter on the pot swing frame and the sensor on the main caster body, and a length of not particularly heat-resistant wire lead connecting them. To allow for the motion of swinging the pot out and to keep the lead away from hot surfaces, I added a steel wire bail to support the sensor lead. I hammered the end of the wire to flatten it so the bail would not swing around, and attached it to the temperature controller’s mounting rod with some wire ties using a ClampTite Tool I purchased from lee Valley Tools. From the attachment point, the wire bail goes up to the counter itself, loops back down to the near the height of the sensor, then across to the position of the sensor. The sensor lead was zip-tied to the bail in several places, with the excess wire left in a loop near the sensor. The flexibility of the bail and the extra loop of wire provide plenty of mobility for swinging the pot open.

Monotype actually offered a mechanical pump stroke counter (part code 80CU1) as an option, which triggered on the motion of the pump operating rod upper crosshead.

This electronic counter should prove to be a valuable addition to my caster and I would like to thank Stephen for giving it to me.

One comment on “A Pump Stroke Counter for the Monotype Caster”