It was a bit late, but I finally got around to harvesting the stems off my mulberry plant for fibre. Over the summer we had been pulling off suckers so the stems grow long and thick with little side branching.

I think this has paid off well, since this year’s crop has very long stems, and the total raw weight (wood included) is almost twice last year’s harvest. Of course, some of that could also be the plant still recovering from its move in 2009. 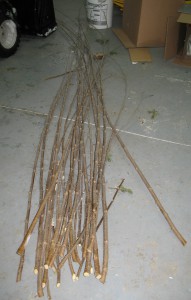 This was somewhat late for harvesting these. There has been snow on the ground for over a month, and hungry critters have started to gnaw at the lower stems for food. I’m not sure what animal in particular, but because the damage was at ground level, I suspect a raccoon or an opossum (which have started moving into our area in the past few years). Two years ago the plant was devastated over the early summer by what I eventually concluded was deer, but they work from the top down.

As with last year, I have cut the stems to fit our steamer pot and tied them in a bundle. The total weight of the green stems is 4.56kg (almost exactly 10 pounds), nearly twice last year’s harvest of 2.6kg. Again, as with last year I hope to steam off the bark while these are still green, even though last year’s crop is still waiting to be steamed.

Damage from animals feeding on the bark. They also cut right through the wood in a couple of spots.

The branches, cut to length for the steamer and bundled.