The one ribbon I have to test out composition casting on my Monotype was in rather sad shape. It had several kill lines which cause casting problems by allowing the mould to chill too much, and it had also been damaged quite a bit during my attempts to adjust the ribbon feed on my air tower.

I used PVA (white glue) for the repairs, but in retrospect this seems to leave very stiff areas in the ribbon so a glue that sets softer (perhaps starch paste) would have been preferable.

The main job I undertook was to cut out the kill lines and splice the remaining ribbon together.

The kill lines removed from the ribbon. Some have been scavenged for repairing torn tractor holes. 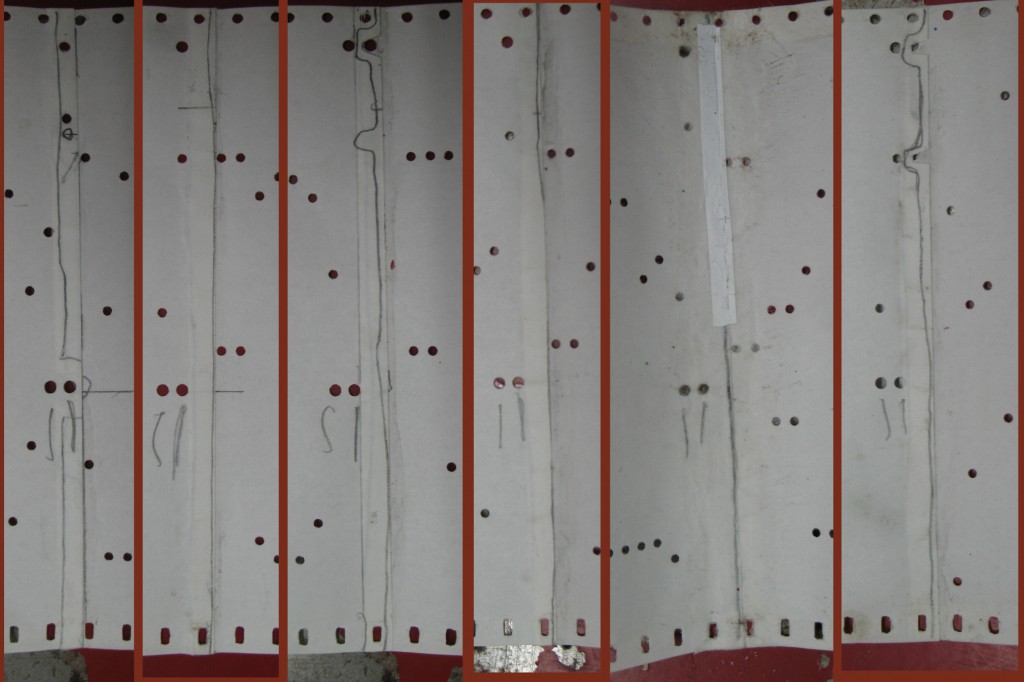 Most of the splices were lap joints, although in the fifth joint I cut the ribbon wrong and had to butt the two ends together then join them with tissue. The gap in the butt joint was air-sealed using correction tape. Because of the width of the tissue this joint has a particularly long stiff section from the glue.

In the third and sixth joints the killed line had an odd length, so I had to keep the line-kill punch to make the tractor holes come out even.

Several of the punch holes should be cleaned up so they pass air properly, and the roughness from the lap joints may cause excessive air leakage around the air bar. I have already re-adjusted the air bar to raise higher than normal to allow the rough joints to pass without snagging.

There were also a pair of small holes torn, probably caused by the metal supports for the two drag bars that provide slight tension for the ribbon passing over the top of the air tower. For these I tried correction tape (a very thin tape for covering over printing on paper to allow for corrections) applied to both sides so there would be no exposed adhesive. This stuff is so thin I wonder if I should have used it to make all butt joints in the ribbon. Although I can experiment this way on the kill lines, because I used PVA on the good ribbon I can’t take the lap joints apart to turn them into butt joints anyway.